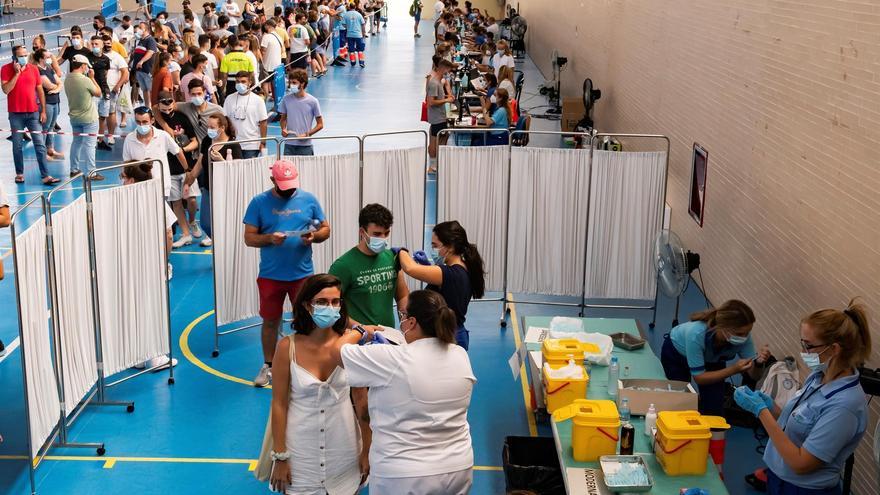 The 14-day incidence continues its decline in Spain and now stands at 591.14 cases per 100,000 inhabitants. This data represents a drop of almost 24 points compared to 614.88 yesterday, Thursday. The incidence maintains a downward curve since Tuesday of last week, when the peak of this fifth wave was reached, in 702 cases.

The incidence increases only in Castilla-La Mancha and Melilla. Balearic Islands, with 833.35 cases; La Rioja, with 716.76; and Navarra, which has an incidence of 712.04, are the regions with the worst situation at the moment. In contrast, only Asturias, with 393, falls below the 400-point barrier, precisely the autonomy that maintains the best vaccination data.

If the focus of this indicator is broadened by age, young people between 20 and 29 continue with the worst data, although in clear improvement for several days. This Friday they drop to 1,332 cases per 100,000 inhabitants, a jump of almost 70 points. The next age range also falls, that of 12 to 19. It goes from the 1,360 registered yesterday to 1,315 this Friday.

The Ministry of Health has reported in its latest daily report 21,561 new infections in the last day, a slight increase compared to Thursday, when 21,387 were notified. In total, 4,588,132 people have been infected with COVID-19 since the start of the pandemic.

The communities that register the highest number of new cases are Andalusia, which has 4,634 infections; Madrid, with 3,214 in the last day; Catalunya, which scores 2,824; and the Valencian Community, with 2,060 new positives.

The authorities have also notified 75 new deaths registered in the last 24 hours. On Thursday there were 87 deaths. Since this health crisis began, almost a year and a half ago, 82,006 people have died from COVID-19.

Regarding the hospital situation, both general occupation, which adds 11 patients, and intensive therapies, which goes from 20.78 to 20.87%, worsen slightly, although this indicator has remained stagnant at 20 points since Monday . In the last 24 hours there were 1,199 admissions and 1,405 discharges due to COVID-19.

Vaccines for children are getting closer, although their role in managing the pandemic is still uncertain

There is no licensed vaccine for them, but they are already beginning to occupy part of the conversation about the near future of the pandemic. Children under the age of 12 will be the last to be immunized if at some point the drugs being tested gain approval from regulatory agencies. And if it is so decided. Today, the priority is to achieve high immunization rates for adults and adolescents, which is almost without beginning, but the group of the youngest anticipates a complex scientific and ethical debate.

The Minister of Health referred to this, Carolina Darias, recently in an interview in which he stated that the issue will not be without “controversy” and called for caution to “generate consensus from scientific evidence.” What he made clear is that the matter is on the table and the Ministry has already begun to work on it with pediatric associations. The decision, said Darias, will be taken gradually, but he advanced that in some way it is the next stop of vaccination because “if we want to have complete immunity we have to be able to do it.”