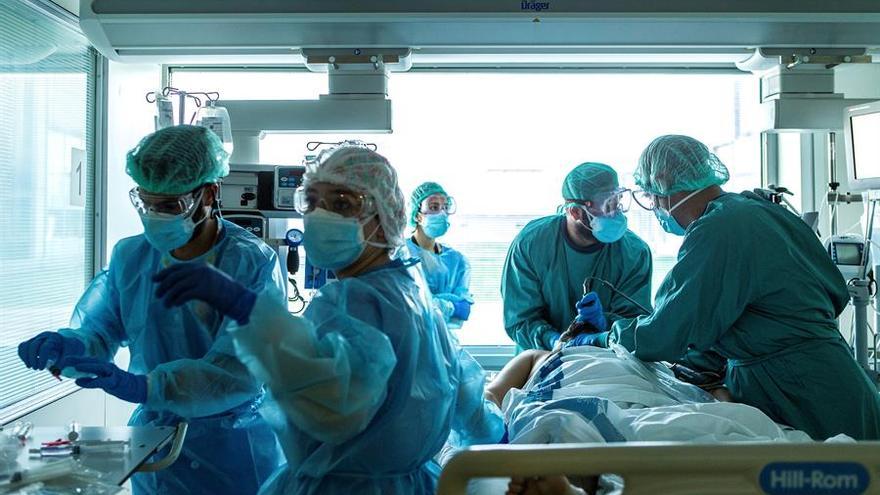 The Ministry of Health has registered 9,901 new cases of coronavirus this Thursday, of which 5,386 have occurred in the last day. This is the highest daily figure since last February 25, when they were 9,568. In total, since the beginning of the pandemic, 3,336,637 people confirmed by tests have been infected in Spain.

Regarding the deceased, this Thursday the Health balance adds 142 more, which brings the total for more than a year to 76,179. Of them, 282 have died in the last seven days.

Incidence continues to rise, reaching 174.52. That represents an increase of six and a half points with respect to the 167.97 cases per 100,000 inhabitants in the last 14 days registered the day before. The data keeps increasing in all regions of the country, except in the Canary Islands and Catalonia.

In addition, as of today, 9,384 people are admitted to hospitals, which means that 7.50% of the beds are occupied by COVID patients. Of these, 2,024 need treatment in the ICU, that is, 20.26% of the places in these areas are intended only for patients with this pathology. On the other hand, in the last 24 hours, revenues have been slightly higher than the highs: 1,136 versus 1,080, respectively.

More than three million people have already received the double dose necessary to receive immunization with the vaccines available right now in Spain against COVID-19 –AstraZeneca, Pfizer and Moderna–, representing 6.4% of the population.

By age group, 49.2% of those over 80 years of age already have the complete vaccination schedule and 87.4% have received the first dose, while one of the most lagging groups continues to be those who have between 70 and 79 years. In them, only 9.1% have received a dose and only 2.9% have received a complete immunization, 115,878 people.

Regarding the communities, Castilla y León is the one with the highest percentage of the population vaccinated with double doses, with 10.8%, followed by Asturias, 10.6% and Extremadura, with 9.1%. On the other hand, those with the worst data are Melilla, which has only immunized 4.4% of its inhabitants, followed by the Balearic Islands, which has done the same in 5.4% and Ceuta, with 5.5% .

In total, the regions have administered 9,811,529 doses and 16.9% of the Spanish population has received the first dose.

The rate of vaccination has increased considerably this Tuesday. The 7-day average of punctures has risen to 209.9111, from 188.955 yesterday. At this speed, it would take 9 months to vaccinate 70% of the population (with two doses).

Within the vaccination, this Thursday, The Public Health Commission of the Ministry of Health, with community technicians, has decided to broaden the age range for the general population of the AstraZeneca / Oxford University COVID-19 vaccine. It may be administered to the general population between 65 and 69 years, until now it was limited to 65. The decision is “to continue vaccinating with AstraZeneca to the group between 60 and 65 that is already currently being vaccinated and that the next group to be vaccinated with AstraZeneca be it from 66 to 69 years, with the aim of completing the vaccination of the population most vulnerable to COVID-19 as soon as possible, other vaccines may be used depending on availability. ”

On the other hand, regarding the restrictions against COVID-19, this Thursday the Valencian Community has announced that it is expanding the number of guests in the hospitality industry to six per table and the meetings in homes to two different family groups. The measures, announced by President Ximo Puig, will come into effect from next Monday, April 12. Thus, both the curfew between 10 p.m. and 6 a.m. and the perimeter closure of the Valencian Community will be maintained until May 9, if the state of alarm finally declines, as announced by the President of the Government Pedro Sánchez.