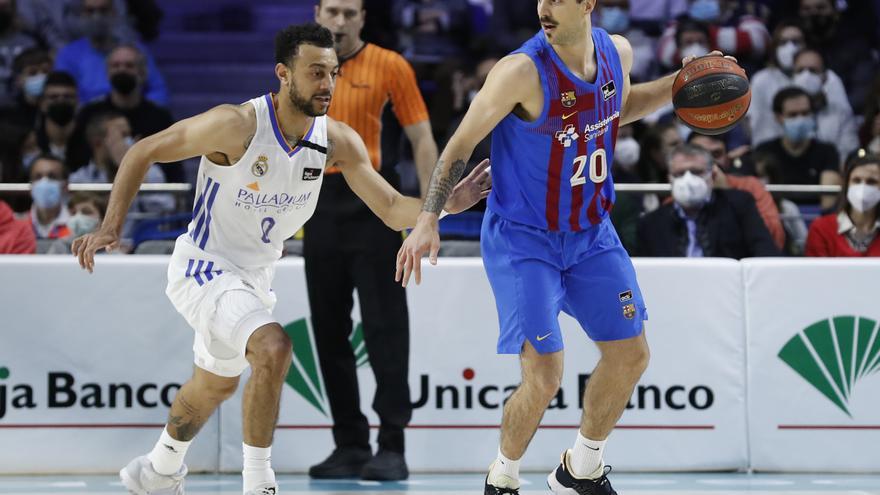 Shortly before eating the grapes, while the executives and workers of the ACB League enjoyed a few hours of family relaxation after the first tidal wave of suspensions of matches because of covid, their emails and WhatsApp groups began to smoke. The barca had just notified three new positives and that necessarily implied the suspension of the Classic which was to be played on January 2.

Already in New Year, in the morning, the CBA officially announced the postponement of the Barça team's visit to Real Madridduel finally played on January 23 with victory of the team of Saras Jasikevicius. A decision that endorsed the conviction of the main Spanish basketball competition of being extremely conservative with the Covid positives, more than 100 in the League during the last month.

"If the Classic had to fall, let it fall. But we were not going to assume the most minimal health risk", summarized from the ACB those days of cascade of suspensions. Its protocol dictates that a team must have nine players fit to be able to play, but with flexible interpretations that led to games being postponed if a positive came up and there was no material time to carry out a reinforcement test on the rest of the members of each team.

Games were even delayed for a couple of hours to wait for the results of a new PCR test, with the consequent headache for Movistar Plus, which broadcasts all the games, at the time of redoing its programming on the fly. An extra effort that the ACB values ​​very positively, highlighting the collaboration and understanding that they have had during this difficult month on the part of the operator.

As a paradigm, precisely, the day of the January 2, in which the nine planned matches had to be postponed. From the Decembre 19ththe ACB has been forced to postpone due to Covid a total of 26 gameswhen in the previous three months since the season began (September 18) only two had had to be canceled.

There have been two games that have even had to be postponed twice. Of those 26, there are still six to play. All this with the added difficulty of having to readjust everything in the worst possible stretch of the championship (apart from the final days), given that it was in this month when the eight classified for the Copa del Rey were decided.

The last day that marked the regulation to decide the participants in the appointment that will be held next month in Granada was the January 9th. However, the clubs decided to extend the deadline until this Sunday, trusting that this extra margin of 21 days would be enough time to play the postponed matches of the 17 first daysthose that mark the butler cut.

Plan B for the cup

Although the expectations were not entirely flattering, the ACB has managed to fit the puzzle and avoid plan b, which consisted of determining who were the eight best based on their winning percentage in the first round. A safeguard that the competition already had to use a year ago, during one of the harshest moments of the pandemic.

All the determining matches have been played and only the Barça-Andorra of the 15th day that takes place this Tuesday and the Betis-Fuenlabrada of the 17th, still no date. The azulgrana had the seeded ticket guaranteed regardless of the result of their clash against the team from the Principality and the other three involved lacked mathematical options.

The draw for the pairings, by the way, is held this Monday at 1:00 p.m. Real Madrid, Barcelona, ​​Joventut Y Valencia They will be seeded and will meet in the quarterfinals against Manresa, Murcia, Breogan Y Tenerife, after the results of this weekend. The baskonia is finally left out of the cup date like other classics like the Unibox and the Gran Canaria.

To accommodate those decisive matches for the cup classification, the ACB has been forced to postpone matches initially scheduled in the second round calendar. In fact, the matchday 19initially planned for the January 22 and 23the days will be disputed in full April 12, 13 and 14while the 20ththe one from last weekend, will be played in free slots on the calendar.

The impact of the sixth wave of Covid-19 has led to a calendar very strange since Christmas, in which the ACB has had to reschedule matches respecting the spaces of the european competitions, in which 10 of the 18 teams that compete in the league participate. Nothing to do with the calendar that was initially planned for these last five weeks: they had scheduled 54 games and only 33 have been played. Another is played this Monday and one more on Tuesday.

In the Euroleaguewith a less guarantee protocol but with the added difficulty of international travel, the destruction of the calendar caused by Covid has also been very important, with 20 games suspended and still to be played since December 23. Of them, two affect Real Madrid, another two Baskonia and one Barcelona. Between the three they should have played 16 EuroLeague games after Christmas and they have only played 11.

In the euro cup have had more luck and only remain five matches pending, one from Gran Canaria and another from Andorra among them. In the FIBA Championsthe third competition, have also had to delay some matches in the second group stage since some previous qualifying matches could not be played.

Bobbin lace has not been easy for any competition, coming to find imaginative formulas such as the one that the ACB League took to bring forward a match scheduled for days later with the aim of allowing postponed matches to be played on the date initially scheduled for their dispute.

A gibberish that from the ACB, given its final result, they consider good despite the effort it has entailed for their own employees, referees, teams, auxiliary staff of the clubs...