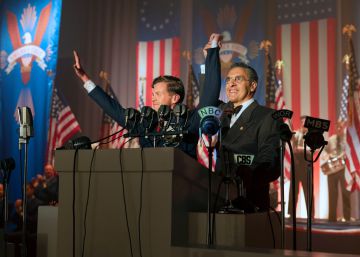 With its future, hostile and unrepresentable, demolishing our present with bullets that move in reverse, Tenet, Christopher Nolan’s latest film is both flamboyant — and confusing — megalomaniacal delusion as it is a symptom of an era that seems to have exhausted all confidence in the future. The climate crisis, the present pandemic and those to come, the effervescence of the extreme right and the pathological nature of a good number of world leaders seem to have given the reason to the dystopian imaginary, turning tomorrow into territory hardly conducive to the creation of fictions. that do not redound in those apocalyptic dynamics. Perhaps that is the reason that encourages the consolidation of a process that has been slowly developing: the growing centrality of what, until a few years ago, was a marginal subgenre of science fiction, the uchrony, which has also begun to infiltrate other territories of majority popular culture not necessarily associated with science fiction. Imagine, for example, that Sharon Tate and company survived the Manson clan massacre, as Quentin Tarantino did in Once upon a time in hollywood, or that, in the postwar period, the film mecca could proudly cede its positions of power to women, African Americans and homosexuals disarmed, as proposed by Ryan Murphy in his miniseries Hollywood, seems to show that, faced with the impossibility of fantasizing about the future beyond the limits of dystopia, what we have left is to look back at the past that were not, but that perhaps could have made us better.

However, this retrospective utopian look, which unites so many recent proposals aimed at reviewing history from a contemporary sensibility, with ecology, feminism and racial vindication as frequent pillars, is not inherent to the nature of uchrony, which also It has served to propose mournful presents from the bifurcation of a key historical event. Thus, the fictions that start from a hypothetical allied defeat in World War II are abundant, almost configuring a subgenre in themselves, with proposals as heterogeneous as the paranoid reality of the crucial The man in the castle, by Philip K. Dick, or, in a less eccentric key, the chronicle of an awareness in the hell of Homeland, by Robert Harris.

The term was coined by the philosopher Charles Bernard Renouvier in his novel of ideas Uchrony, published in 1876, in which a slight correction in the history related to the succession of Marcus Aurelius allowed us to imagine a new story about the West without the hegemonic presence of Christianity. Over time, science fiction would appropriate this strategy of projecting its imaginative impulse backwards, although, in the Anglo-Saxon sphere, the expression “alternative history” would outperform Renouvier’s neologism. Two conceptual interests of science fiction – time travel and parallel universes – would become the natural allies of uchrony, which engendered its own concepts, such as that of the so-called Jonbar Point, named after John Barr, protagonist of the novel The Legion of Time,by Jack Williamson, and that identifies the point of divergence that separates the real historical story from the hypothetical development posed by these fantastic stories that, to maximize their effect, must be written as if they were an imaginary historical novel. Something similar to what happens in works like The conspiracy against America, the novel by Philip Roth that HBO just adapted, or, in another way, in the Spanish series The Ministry of Time.

In its monumental The Encyclopedia of Science Fiction, John Clute and Peter Nicholls discussed the influence that philosophers like Giambattista Vico and historians like Arnold J. Toynbee, Oswald Spengler, and Edward Gibbon had on writers like Larry Niven, Charles L. Harness, James Blish, and Isaac Asimov. The idea of ​​a history capable of being reduced to cyclical patterns was exploited in anticipatory tales that fired echoes of past events on distant galaxies and alien societies. The latest trends in the genre point to the unborn past as the best planet to (re) conquer.