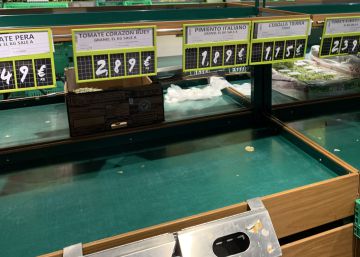 The suspension of the Fallas in Valencia. The not yet established, but possible cancellation of Easter celebrations, or the closure from this Saturday of all shops (except for food and basic necessity) in Madrid. They are just three of the many examples that could be done, but they are enough to understand the damage to the Spanish economy that the coronavirus outbreak – whose magnitude can be accurately measured only in a few months or, perhaps, years – is already causing it. The government announced a crash plan on Thursday. to fight the expansion of the pathogen and mitigate its economic impact, for 18,225 million euros this year, that is, 1.5% of GDP. But, if the gaze is directed towards the domestic economy from large numbers, the question remains of how the arrival of the coronavirus will affect the finances of Spanish households. Faced with uncertainty, experts advise prudence and adopt measures that help mitigate this impact.

“Forecasts about the economic consequences of the pandemic on families are very difficult to make because they will depend on its duration, something that at this time no one can determine,” admits the spokesperson for the Organization of Consumers and Users (OCU), Ileana Izverniceanu. If the duration were short, the effects would be felt mainly as a consequence of the cancellation of trips, hotels, airline tickets and shows. For the OCU, “consumers should be reimbursed for the amounts paid, since it is a circumstance of force majeure and they cannot be the only ones to face the crisis caused by the emergency,” said its spokesperson.

But many families are already forced to bear the additional costs of caring for children in the Autonomous Communities where it has been established to suspend classes, a decision that already affects more than 10 million students. In this sense, Izverniceanu highlights that some households cannot bear this cost and that reconciling work with childcare is an impossible task for some. Therefore, it requests that these parents “have the right to paid permission for an inexcusable duty of a public and personal nature, taking refuge in a public health situation.”

In a scenario in which the pandemic lasted for a longer period, the financial expert Antonio Gallardo foresees a decrease in consumption. This would lead, on the one hand, to an increase in available savings, which, however, in an environment with very low interest rates, would not provide any additional benefit to the user. On the other hand, it would contribute to a worsening of the economic situation that would lead to layoffs or, in the case of a self-employed worker, loss of income, which would jeopardize the family economy.

Nor should the effect of the stock market collapse be overlooked –the Ibex registered last Thursday the worst closing in its history, -14%– in small investors. “Many of them have their savings in investment funds and pension plans, so even though they don’t sell these investments, they are impoverishing themselves,” explains Gallardo. Still, “it is convenient that in a situation of high stock volatility like the one we are experiencing, users do not rush to make decisions that may cause a loss in their investments, “advises Izverniceanu.

In any case, it will be essential to see how the coronavirus crisis will have affected household finances and to review the different chapters of the budget. “In some cases, hardly any adjustments will have to be made,” says Gallardo, “since the cost item could decrease because decisions already foreseen, such as Easter travel, or —as it seems probable— by a consistent decline in the Euribor, which would entail a lowering of the mortgage payments ”. In his opinion, for some it will not be so much about eliminating expenses and projects, but about making adjustments in the former and postponing the latter.

“We must ask ourselves if we can make important purchase decisions and study whether they adapt to changes in our personal circumstances, especially if they involve indebtedness,” Gallardo insists. In this sense, the OCU recommends avoiding situations that could lead to excessive debt. “If you need to resort to credit, you have to compare between the different options, ranging from the cheapest, such as advances on payroll or loans between family members, including consumer credits, and even the most expensive and inadvisable, that is, fast credits and revolving“Izverniceanu adds.

In crisis situations like this, the lucky ones who have been able to accumulate savings and have kept the part dedicated to the short term —for unforeseen events and needs such as those that occur now— and that of the medium or long term —which covers important purchasing decisions- well separated. future like a home, and retirement– You can use this contingency fund. On the contrary, “if, for example, all our money is in investment funds that have dropped sharply and now we need it, we will find ourselves with significant losses,” warns Gallardo.

Of course, now is the time to “stay calm,” Izverniceanu suggests. “If we have the need to make any adjustments, let’s do it sensibly, thoughtfully and taking into account all the variables; Above all, let’s not panic, buying many things or by selling investments at a loss, and let’s look at everything with perspective, ”adds Gallardo. For this expert, the crisis may also be an opportunity to draw a positive lesson: “Understand the importance of spending time to have a budget in order.”