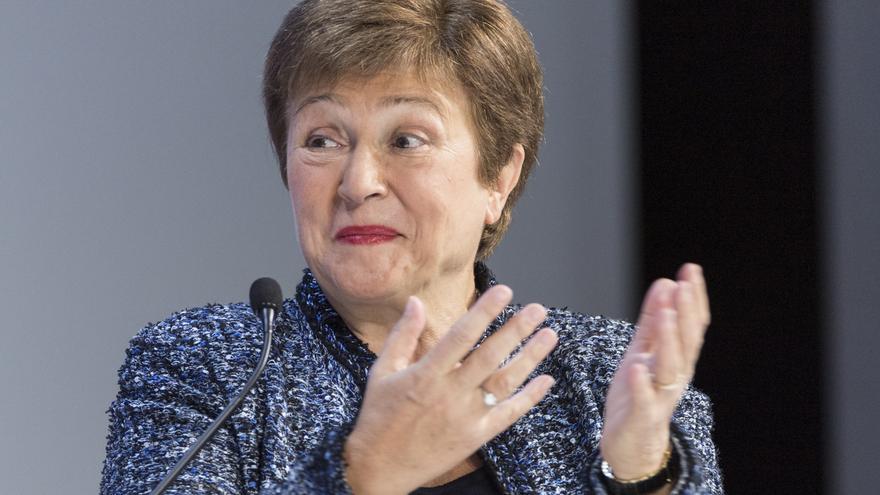 If things do not improve and European funds continue to lag, more economic measures may be needed in the European Union to withstand the impact of the pandemic given the severity of the second wave that the continent is experiencing. These are some of the conclusions pronounced by the president of the International Monetary Fund, Kristalina Georgieva, who presented this Monday to the finance ministers of the eurozone her 2020 report. “The pandemic is causing severe socio-economic disruption and hardship despite an unprecedented political response, “the document states:” A vigorous response from the ECB’s monetary policy, unprecedented fiscal stimulus and other measures at both national and EU levels They helped cushion the impact of the crisis and supported a strong recovery in the third quarter. However, the second wave presents a considerable risk to recovery. Rising infections and government restrictions have damaged confidence and reduced mobility, and better-than-expected growth in the third quarter of 2020 will likely be followed by weaker activity in the fourth quarter. Unless the dynamics of the pandemic change significantly in the coming months, growth in the first quarter of 2021 will be weaker than expected in the October 2020 outlook. ”

The IMF understands that “deep risks remain clearly until early 2021 given the second wave,” while acknowledging that “the promising news on vaccine development provides an important opportunity as the rapid and widespread delivery of safe vaccines and effective measures would likely stimulate a quick recovery. ”

“However,” Georgieva’s body continues, “a prolonged health crisis and slow recovery would lead to tighter financial conditions and greater vulnerabilities of the public and private sector, while hysteresis [cicatrices permanentes] significant increase in the labor market would increase inequality and poverty. Taken together, these effects would depress the growth potential of the euro area. Ongoing negotiations on the UK’s future relationship with the EU27 and a possible escalation of trade tensions add to uncertainties. ”

In this regard, the IMF recognizes that “the historic Next Generation EU Recovery Package (NGEU) could provide a significant boost to euro area growth if effectively implemented. The July agreement on the The recovery, which includes € 390 billion in transfers, sends a strong signal of European solidarity in tackling this crisis. However, obstacles need to be overcome to finalize the package and disburse the funds, as further delays would damage the prospects for recovery of the euro area “.

With the second wave in full swing, assumes the IMF, “it is likely that national fiscal policies will need to provide broad support for longer than initially anticipated.”

“National fiscal policies have been a fundamental defense against the pandemic, and have notably cushioned its economic and social impact by providing critical lifesavers for workers and businesses,” the agency says: “Withdrawing that support too soon would risk derailing And more fiscal support will be needed if the outlook deteriorates further European recovery fund loans and precautionary credit lines from the European Stability Mechanism [el mecanismo de rescates de la UE], which have not yet been used [240.000 millones], can help mitigate these pressures. In a severe deterioration scenario, it may be necessary to increase or expand the defenses. ”

Since the pandemic began, the European Commission suspended the Stability and Growth Pact so that states could jump the deficit and debt limits with expansionary public spending policies. “The escape clause of the Stability Pact should be extended until the recovery is firmly established,” suggests the International Monetary Fund, which points out that “it could be an opportune moment to reform the fiscal rules of the EU. With the normal functioning of the rules suspended until 2021, EU leaders should commission the European Commission to propose fundamental reforms to the rules as part of its review of the fiscal framework. ”

“Monetary policy has been bold,” concedes the IMF, “but more support is likely to be needed. As the economic outlook deteriorates further, additional stimulus will be needed to facilitate a sustained rise in inflation. In this regard , the commitment of the Governing Council of the ECB to recalibrate its policy instruments at its next meeting in December is welcomed, once the macroeconomic projections prepared by Eurosystem experts are in place “.

The IMF warns that “banks have already begun to tighten credit conditions as risk aversion increases and loan guarantees and defaults expire.” The Fund also understands that “the unprecedented scale of the crisis and the uncertainties surrounding the recovery call for expanding solvency support. At EU level, a solvency support instrument could play a role in maintaining the integrity of the single market given the different capacities of countries to provide capital to companies in difficulty, especially in a downturn scenario. ”

“Labor market policies need to remain nimble to help facilitate adjustment while supporting recovery, and a deeper redesign may be warranted given the ongoing structural transformation,” the IMF states: “Measures designed to buffering the immediate impact of the pandemic may not be adequate to support recovery. For example, ERTEs have been valuable in protecting jobs and livelihoods during the pandemic, but once recovery begins, these schemes should be phased out and be complemented by measures to facilitate the movement of workers to jobs in expanding companies and industries. ”

The IMF also notes that “the pandemic is disproportionately affecting the poorest regions with pre-existing structural problems and is exacerbating inequality, and the benefits of the recovery may also be unevenly distributed, so specific policies will be needed to protect vulnerable regions and prevent increasing inequality, with special attention to youth and disadvantaged groups. ”

“Those responsible for all this should not be campaigning”