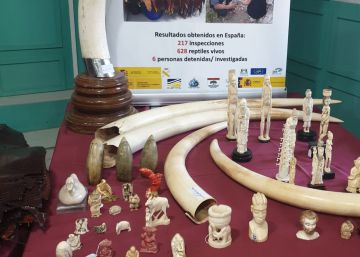 The illegal trafficking of species has become one of the great struggles of the Civil Guard, which has closed the Celacanto operation in which 2,296 specimens of 70 species of protected fauna have been seized. The damage that occurs in biodiversity, joins the value reached by the pieces which makes it a lucrative business. "It is more profitable to trade with elvers (one of the animals apprehended) than with cocaine," Seprona commander Sergio Rodríguez explained this morning in the presentation of the results. The price leaves no room for doubt: "A kilo of eel here becomes in one ton of angula in Asia, and the kilo is sold at 1,000 euros, it transforms into more than one million euros. "The rhinoceros horn is valued at 60,000 euros per kilo and one rough tusk of more than one meter. elephant at about 3,000 euros, an amount that varies depending on whether it is carved or not.

This illegal trade is also profitable due to the reduced penalties that criminals face. "The sanctions are not high, they do not reach the year, but if the contraband is added, the criminal group membership and, even, money laundering, would reach three or four years," added Commander Rodriguez.

The operation has been carried out for three months and 203 people have been investigated and a total of 225 complaints have been filed for irregularities related to smuggling, the Law of Natural Heritage and Biodiversity. It has been done in three phases. The last part of the action has given rise to the greatest apprehension that has been carried out in Spain of illegal African elephant ivory pieces. The operation has included a novel dating technique, analyzing carbon 14 that contains ivory.

The population of this species has decreased up to 30% in the last seven years due to the slaughter by poachers, which between 2007 and 2014 ended with about 28,000 copies per year. The trend has changed and there are studies that indicate that catches have been reduced by half. "In any case, if the current rate of poaching is maintained, experts estimate that the population will be extinct in 15-20 years," indicated the Civil Guard. They have seized 543 pieces of ivory, valued at more than 400,000 euros, both carved and raw tusks. Last year there were only 110. "It does not mean that there is more traffic, but we have focused on it", explains the commander of the Seprona.

The first of them, coordinated by Interpol and already known, refers to the European eel traffic (fingerlings) that are fattened in farms for their later consumption. And the second one has focused on the control of reptiles. 628 specimens have been intervened, and there have been six arrests. Among the actions, an intervention at the Barcelona-El Prat airport of 76 giant Aldabra turtle specimens that a passenger carried in his luggage stands out. In the market they would have reached 114,000 euros. In addition, 113 specimens of the Madagascar starry turtle, a species cataloged in critical danger by IUCN, were located. The total valuation is greater than 90,000 euros.