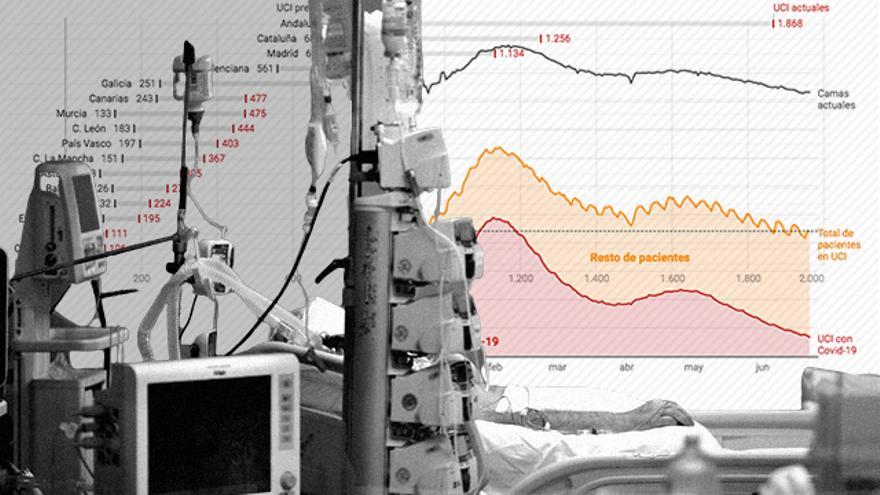 The hospitals they begin to lower the blinds of their ICUs COVID-19 and some even say goodbye to your last patient after ten months. Healthcare pressure breathes for the first time in the pandemic. The reality within these walls has been so extreme that the people who work there are reluctant to speak of waves: for intensive medicine workers there has been a single tsunami that is only now beginning to subside. At the end of this week there were about 2,400 people hospitalized and around 659 in the ICU, 20% less compared to the previous week. To compare: at the peak of the third wave there were 32,000 admitted to the ward and 5,000 to the ICU; and on the day the state of alarm subsided, they were 8,500 and 2,100 respectively.

During all this time, the ICUs have stretched and shrunk like an accordion. In the first wave, the people admitted occupied all the intensive care beds that were then in Spain and in addition, a thousand more had to be improvised to cure a single disease. Cafes, chapels, hallways, and libraries of hospitals served as intensive care units until, little by little, other less unique areas were enabled. But the long-awaited structural expansion did not come either. Before the pandemic, in 2019, Spain had 4,447 intensive care beds; at the peak of the third wave, they reached 11,000; and now, according to government figures, there are 9,300.

On that basis, occupancy in ICU and ordinary beds is measured: the first is at 7% right now and the second at 2%. Both at low risk, although it depends on the autonomous community that is being looked at. Madrid continues to lead the list of ICU employment with 14.7%, followed by Castilla y León with 11.3% and Catalonia with 10.7%. On the other hand, Galicia, Cantabria, Extremadura, the Valencian Community, Murcia, the Balearic Islands and some provinces of Castilla La-Mancha, Andalusia and the Canary Islands have their ICUs in the “new normal” section.

And again, COVID occupation is only an approximation. Salvador Morales Conde, president of the Spanish Association of Surgeons (AEC), acknowledges that ICUs are now at 120% of their total capacity. “It is not that we are operating at pre-pandemic levels, it is that we are doing much more,” he explains. It is the effect of having recovered surgical activity after months of hiatus due to the coronavirus. “Surgeons have been supporting internists in COVID plants for a long time, but now we have had to duplicate our usual work,” he says.

Many of the regions that are doing well in terms of occupancy are the ones that increased their ICU beds the most, according to Health data. Regarding the 2019 prepandemic endowment, the largest expansions are in Murcia (257% more), Asturias (228%), Galicia (198%) or Cantabria (165%), according to the Ministry. But the data change if you go directly to the councils of each community. In Murcia, for example, they specify that they have returned to the number of basic ICU beds (144) with the option of tripling them if the cases increased, at which time they would occupy areas of operating rooms and resuscitation rooms that have now returned to their usual use. In other words, the “enlargement” of Murcia is artificial.

This is the case in many other regions consulted by elDiario.es. In Euskadi, one of the worst hit in the last stretch of the pandemic, they recognize that the base is 219 beds and that it can be expanded to 560 depending on the alert level, with 5 being the maximum. They currently have 261 patients –level 2–, but they have never exceeded 400 beds –level 3–. If the alert level drops, they close the enabled zone, but it depends on the hospital. In this case, the extension is accessible, but it is not structural either. In Castilla y León they have a hybrid system: now there are 398, more than double the number in a normal situation (166), but fewer than there were at the peak of the pandemic (530). Even so, they do not reach those that appear in the Health database: 444.

Galicia also admits that its extensions were all temporary, that the 17 COVID patients they have are in traditional ICUs and that the rest of the facilities have returned to their normal use. “Except for another pandemic, the ICU beds that exist arrive,” say sources from the Department of Health. In the Canary Islands, which according to Health data has 94% more beds than in 2019, the same thing happens. There are no extra rooms enabled and the spaces that were used (rehabilitation rooms, awakening units or operating rooms) are no longer suitable for COVID-19.

Navarra recognizes that, although it reports 230 beds to the Ministry of Health, it does not mean that they are enabled. What it implies is that within 48 hours they could be transformed if necessary. The Valencian Community also works like this.

The only ones that ensure that part of its expansion has come to stay are Madrid, Catalonia and Cantabria. The most popular is that of the Zendal hospital in Madrid, presented as a pandemic hospital with 140 ICU beds. For its part, in Catalonia, the Cínic has 7 ICUs and two of them have remained available for COVID-19, while the Can Ruti hospital opened two floors in February with 40 additional critical beds.

Finally, in Cantabria, the Valdecilla hospital in January arranged a new ICU with 18 beds in an area without previous use that will be preserved. “The new ICU, with a cost of more than two million euros, financed by the Ministry of Health of the Government of Cantabria, has been created with the aim that in the future it can be used as an Intermediate Care Unit also attached to the Service of Intensive Medicine, once the pandemic is overcome, “explain sources from the counseling. In addition, this hospital has converted two lower pavilions into areas of coronavirus care as a” gain from the pandemic.

The intensivists warn of the importance of taking these accounts. The ratio of ICU beds prior to the pandemic was 9 per 100,000 inhabitants, quite low compared to some European countries –Germany has 33– and with the OECD average (15.9). With the current sum, Spain would finally reach 15 per 100,000 inhabitants. But as we have seen, the calculations are not that simple.

“It is true that some communities have improved a lot, but not all beds can be maintained because many are still in post-anesthetic resuscitation units, in open boxes or very far from intensive medicine areas,” said María Cruz Martín Delgado, at the time. President of the Pan-American Federation of Intensive Care and Head of the Intensive Medicine Service at the Torrejón de Ardoz Hospital, in Madrid. “More intensive care beds are needed to keep occupancy below 80%, because the ideal would be to have always a bed reserved for a situation of a critical patient who needs immediate admission to the ICU “, expresses Álvaro Castellanos, president of SEMICYUC, the Spanish Society of Critical Intensive Medicine and Coronary Units.

José Carlos Igeño, coordinator of Planning, Organization and Management of the intensivist society, believes that it is too early to think about closing the COVID ICUs. “We do not know how long the immunity time of the vaccines is or if a new resistant variant will come. We should not yet launch the bells to the flight and keep the units that were opened before an eventual outbreak ready, at least until winter arrives, “he says. The president of the AEC, Morales, demands to have “the rearguard covered” and that a plan B be established so that the managers of the hospitals do not have to do “engineering” again to gain space in the ICUs.

In the opinion of the experts, this is a good opportunity to modernize them. “As an anecdote, at Johns Hopkins Hospital (Maryland, USA) they have 8 ICUs and one of them is ashamed to teach it because they say it is very old: it is 13 years old. In Spain there are many who are 30 ”, says Igeño, a specialist at the San Juan de Dios Hospital in Córdoba.

“It has been seen, among other things, that our country needs more and better intensive care beds,” says Castellanos. The head of the area at the Hospital La Fe in Valencia advocates “promoting the stratification of care” and separating the care of seriously ill patients according to their needs. An idea that Igeño picks up, who comes up with various uses for temporary extensions in addition to the aforementioned modernization. “The annexed units can be used to expand the original ICUs permanently. Intensive medicine is experiencing an increase in patients because now complex surgeries are performed that previously were not operated or many more elderly people are treated,” explains the SEMICYUC spokesperson. .

Another option is to keep them “open during epidemic peaks, such as flu and other respiratory illnesses.” Third, “they can be used when there are peaks in demand for surgeries, since waiting lists have increased a lot.” Finally, “another important utility is to create very valuable intermediate care units that do not exist in most hospitals,” Igeño points out.

Before giving them a second life, and under the maxim that an ICU is not a “bed with a respirator”, all experts request a staff reinforcement. What the professionals who work in them denounce is that an ICU bed cannot be counted as such without the necessary equipment and professionals, and most lack the latter as they are victims of “professional burnout”. “Many have had to double shifts and renounce drafts in a fairly sustained situation over time,” Castellanos puts as an example.

In addition, very specific training is needed to work in an ICU. Not just anyone can replace them. Spain is one of the few countries that specializes in Intensive Medicine, which workers say has a positive influence on the diagnosis of the patient. “You train for five years just to be an intensivist and care for any type of critical patient,” claimed the head of Torrejón de Ardoz, María Cruz Martín Delgado. For all this, health workers demand a real contingency plan from the autonomous communities to ICUs that include beds, technology and, above all, manpower. “We do not want to be overwhelmed again,” warns José Carlos Igeño.