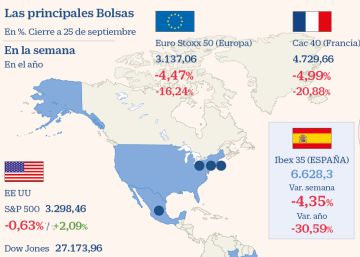 The Bags They have relived another day of nervousness amid the fear that the outbreaks will force more restrictions that slow down the recovery. He Ibex It has tried to stay out of the falls in the rest of Europe, but has finally succumbed to discouragement and lost 0.23% to 6,628.3 points, its lowest level since May. In the week, the selective lost 4.35%.

Within the Spanish selective, approximately half of the values ​​ended in red. Ferrovial has led the falls with a decrease of 3.93%. Banks have recorded losses of more than 2.7% in the case of Bankia, CaixaBank, Sabadell and Bankinter. For its part, BBVA finished between the increases with a rise of 0.35%. The stock reacts to the rate hike in Turkey where the central bank has raised the benchmark interest rate to 10.25% from 8.25%, the first hike since September 2018.

“The decision of the Turkish central bank is a breath of fresh air for the profit and loss account and for the bank’s short-term price,” Bankinter explains in a report. BBVA operates in Turkey through its subsidiary Garanti, which represents 21.1% of net profit and 8.2% of the balance for the second quarter of this year.

In Spain, the Bank of Spain has decided to maintain the countercyclical capital buffer applicable to credit exposures located in Spain at 0% during the fourth quarter of 2020, considering that in the current crisis context “it is essential” that institutions credit maintain the flow of financing to economic activity.

In the background, the increase in Covid-19 cases in many countries is forcing governments to re-implement restrictions, either on mobility or on opening restaurant businesses, and raises concerns that the weak economic recovery will be affected. In addition, in the United States political tension increases as the date of the presidential elections approaches. The differences between Republicans and Democrats suggest that it will not be possible to pass a new stimulus package until there is a new president.

Against this background, investors are betting on assets with less risk and the dollar benefits. The euro is hovering around $ 1,624, its lowest level since July.

“The context remains the same as in recent days, with growing doubts about the ability of economies to recover quickly and intensely, and with investors turning to safe haven assets such as the dollar, which has already recovered 3% since the euro touched 1.20 dollars at the beginning of September, “they point out in Renta 4.

Regarding debt, the yield on the US bond stands at 0.6675%. The yield on the ten-year Spanish bond, the benchmark, remains at 0.249%, and the risk premium (difference with the German bond) rises to 75.2 basis points.