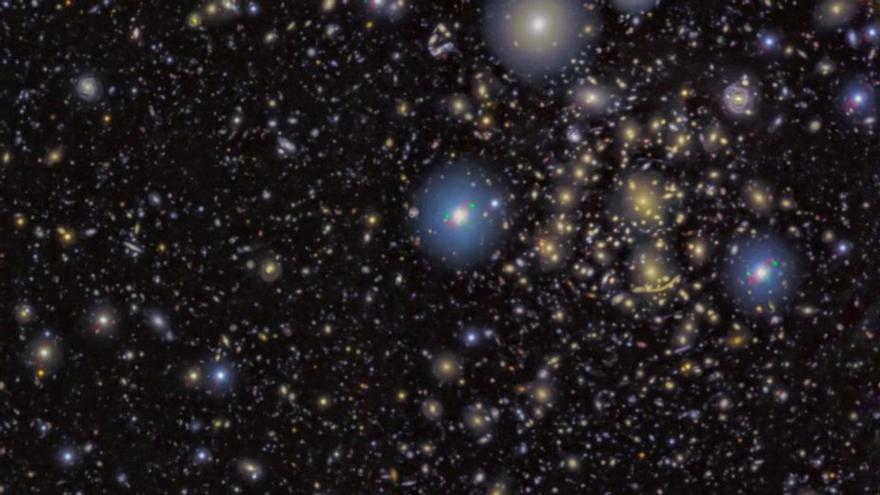 A team of researchers from the Cosmology group of the Instituto de Astrofísica de Canarias (IAC) has obtained one of the most precise measurements of the mass contained in clusters of galaxies and its relationship with the amount of hot gas in these structures. To do this, the dynamics of the galaxies in 570 clusters selected from the catalogs provided by the Planck satellite (ESA) have been studied. This study has culminated a four-year observational effort, in which more than 10,000 spectra have been obtained at the Telescopio Nazionale Galileo (TNG) and the Gran Telescopio Canarias (GTC), located at the Roque de los Muchachos Observatory, as well as data from the public archive of the Sloan Digital Sky Survey (SDSS). The result allows us to infer the amount of dark matter that exists in the Universe.

Galaxy clusters are the largest gravitationally bound structures in the Universe. The characterization of its spatial and temporal distribution provides one of the most powerful tools in modern cosmology to determine the origin and energy content of the Universe, the rate of expansion during cosmic evolution, and the details of the formation process of all structures in the Universe. large scale that we observe in the Universe today. These immense groups are not only made up of galaxies, which barely make up 2% of the total mass of the clusters. In addition, they contain extremely hot gas, which accounts for 15% of their mass, and a lot of dark matter, more than 80% of the total mass. This "multicomponent" nature of galaxy clusters means that they can be studied using a wide variety of observational techniques. Thus, while the hot gas can be seen in X-rays and microwaves, the galactic component is mainly visible in the optical and infrared.

On the other hand, to study the distribution of dark matter, several indirect methods are used, generally, the total mass.