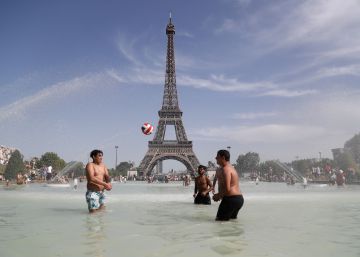 They are not sensations, they are data: in June it has been very hot, therefore, that a record of the planet's average temperature has been broken. It is the "warmest June ever recorded", The Climate Change Service of the European program Copernicus has highlighted on Tuesday. In Europe, for example, temperatures have been two degrees centigrade above normal. And the recent heat wave has had a determining role when firing the thermometers until brands never seen in France mainly, although also in Switzerland, the north of the Iberian Peninsula, Italy, Austria and the Czech Republic.

Reliable records start in 1880. And the warmest month of June on the planet dated from 2016. According to Copernicus data, the average temperature of this last June has been 0.1 degrees higher than that of June 2016 In the case of Europe, the hottest June went back to 1999 and this month has surpassed that mark by almost one degree Celsius.

Copernicus affects the decisive role played by the last heat wave, which lasted five days and was caused by a mass of hot air from the Sahara desert. "Although it is difficult to directly attribute this heat wave to climate change, these extreme weather events are expected to become more common as the planet continues to warm up," says this European program.

Until recently they were "theoretical bases", explains José Ángel Núñez Mora, one of those responsible for the State Meteorological Agency (Aemet) In the Valencian community. But now, adds this researcher, "there is little doubt that we are on a warmer planet." And, as UN experts predicted almost two decades ago, that warming is making heat waves like last week's heat more frequent and harsh.

Núñez is the author of a report by Aemet in which he analyzes the heat waves that have been registered in Spain since the eighties. The report, also released on Tuesday, concludes: "The frequency of hot or extremely hot episodes has increased in the last four decades." Specifically, the analysis points out, the frequency of these phenomena has been "ten times higher in the first two decades of the twenty-first century than in the eighties and nineties of the twentieth century."

Aemet's report coincides with another one more spread this Tuesday elaborated by World Weather Attribution (WWA), an international group of researchers who study the relationship of extreme phenomena and climate change induced by human activity. The WWA report focuses on France, which was hit very hard by this latest heat wave. In fact, as these researchers point out, on June 28 the highest temperature record was registered in an urban measurement station in France: 45.9 degrees Celsius.

The WWA report, which is based on a preliminary analysis of the data, concludes that climate change made the French heat wave five times more likely. In addition, the analysis highlights that a "very large increase in temperature in these heat waves" is occurring. In particular, the researchers argue that these extreme phenomena are now four degrees warmer than those recorded at the beginning of the 20th century. For Friederike Otto, of the Institute of Environmental Change of the University of Oxford and one of the authors of the WWA research, this data is a "reminder that climate change is happening here and now". "It's not a problem just for our children," added this researcher.

In the same line, the study of Aemet, which analyzes the impact on the Peninsula and the Balearic Islands of the last heat wave, highlights that this was also "extraordinary for its intensity", since it left several record temperatures in several provinces. The study adds: "All the conclusions obtained are coherent with the forecasts contained in the climate change scenarios that have been taking place for decades". In the report prepared by Núñez it is highlighted that the Intergovernmental Panel of Experts on Climate Change (IPCC) already described in 2001 "how the frequency of heat waves would increase with increasing average temperature".

"They are no longer hypotheses or predictions", highlights the study by Aemet. "Now, at the end of the second decade of the 21st century, we are already seeing and suffering. We advance through a warmer planet than our ancestors knew, "he concludes.

Human chain for a feminism without borders