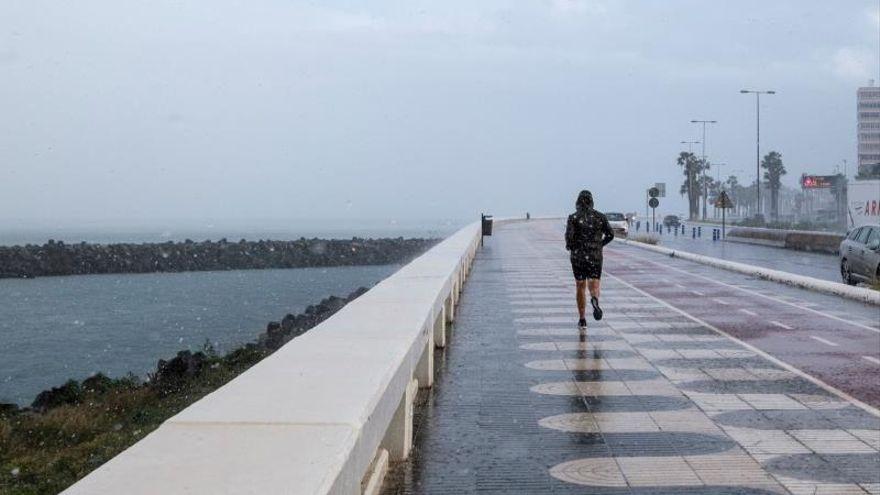 The hydrological year, which began on October 1, 2020, will end this Thursday, September 30, and it does so in the Canary Islands with less rainfall usual.

Specifically, the Canary Islands do not reach the 75 percent of rainfall that would fit with a normal year, according to data from the State Meteorological Agency (AEMET).

Within the islands, the rains have not been evenly distributed and islands such as Fuerteventura do not reach half of the normal rains.

In the country as a whole, the decrease is only 4 percent compared to usual, which makes it a "normal" exercise as a whole, but with rainfall equally distributed irregularly and with several basins in a situation of hydrological drought.

In the absence of definitive results, in this hydrological year until September 26 an average of 606 liters per square meter has rained in the whole of Spain, which represents 4 percent below normal for the reference period, As reported to Europa Press, the AEMET spokesperson, Rubén el Campo.

However, despite being a normal year, the reservoirs are just over 40 percent of their total capacity (40.3%). In fact, the considerable rains that fell in Spain last week have not prevented the accumulated water in the Spanish reservoirs from decreasing again for another week, since the hydraulic reserve lost 109 cubic hectometres in the last week.

At this time, the reservoirs store 22,537 cubic hectometres of water, which is 12.87 percent less than on the same dates a year ago and 23.42 percent less than the average of the last ten years. You have to go back to 2017 to find a lower situation in the reservoirs this week, when they were at 39.40 percent, according to historical data provided to Europa Press by the Ministry for Ecological Transition.

"We have had everything in the last five years, which have been very variable," said the spokesman, who added that, as of August 31 - we will have to wait for the new data from the end of September - five basins were in a situation drought. Specifically, the Ebro basin entered a drought just last August, while Júcar and Segura - who are also in this situation - have been improving their situation and "could leave" that state in September, " a rainy month ".

Specifically, it specifies that Júcar and Segura entered a drought situation in September 2020; Eastern Pyrenees in February 2021; Ebro in August 2021 and the South basin in October 2020. "It is the basins of the southern third, the east and the northeast that present this situation," he commented.

Another characteristic of this hydrological year is the "irregular" distribution of rainfall since in the east it rained more than normal while in the west it remained below the usual values.

"It has been a year of extremes. In the extreme northwest it has been where it rained the most and in the extreme southeast where the least," he says.

By areas, they have accumulated a rainfall surplus of between 25 and 50 percent of normal in the northern half of the Valencian Community, southern Teruel province, eastern Castilla-La Mancha, the Iberian system and Zaragoza.

On the contrary, it has not rained even three-quarters of normal (25 percent deficit) in the eastern end of Catalonia, east of Gerona, province of Barcelona and north of Tarragona, as well as in an area of ​​Andalusia, in Córdoba and Jaén, as well as in an area that covers the south of Seville, the northeast of Cádiz and the west of Malaga.

However, the reservoirs in the areas that are in a situation of meteorological drought are above half their capacity in the case of the Júcar, at 51 percent and the Ebro, at 51.6 percent; while the Segura is full to 38.2 percent of its capacity.

Del Campo states that there could be a meteorological reason that explains "the feeling that it has rained a lot while the reservoirs are going down" and that it may be motivated by torrential rains, as is the case in recent days.

The spokesperson indicates that when we see episodes of very intense rain, we tend to think that the reservoirs fill up, something that does not necessarily have to be this way and that may be due to a meteorological reason.

He explains then that the DANAS leave abundant rainfall but in a specific area that "does not have to" be an area where the waters go to reservoirs and, on the other hand, adds that when it rains in a torrential way in a very short time, the runoff is "very high" and, instead of seeping and recharging the aquifers, it goes away quickly, especially if it is a littoral zone.