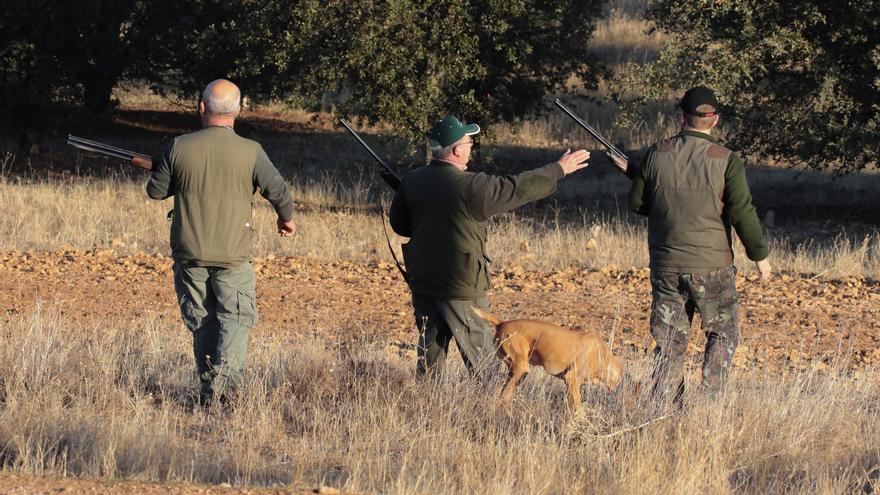 In the heat of the claims of emptied Spain, the hunters have decided to strain their claim to lift all environmental regulations that, they consider, hinder their activity. Admit prohibited hunting practices, allow hunting in places that are now protected and be able to kill currently prohibited species such as the wolf or the turtle dove.

The program' it was written by lobby Cinegético Fundación Artemisán, the same organization that published guidelines for displaying trophies on social networks without causing rejection: "Make the animal asleep, showing no blood", recommended. Now they have topped their list with a play on words: "Spain vacillated", rather than emptied. It is made up of a battery of derogations and regulations ad hoc that facilitate their practices.

His first "demand" is to recover the wildness. Hunting birds for their song to nurture competition teams. Their seasons were hundreds of thousands of prey. The practice contravenes the Birds Directive of the European Union. This was made known by the Commission in a sanction proceedings against Spain. Only the end of these events paralyzed the process that is still alive. Silvestristas have not stopped looking for formulas and allies to maintain their love of capturing goldfinches, greenfinches or greenfinches. They have tried to get the Junta de Andalucía to support them and, for now, they have found an ally in the Community of Madrid.

The Government of the PP in the autonomous community of Madrid has authorized exceptional fighters this year that cover, at least partially, your desires. The regional Executive has covered the permit for the renewal of cymbals and claims, although the Ministry of the Environment has justified that the hunters needed to renew the stock I live from their contingents within a program, in theory, of population monitoring carried out by the Madrid Hunting Federation and directed by the person in charge of silvestrism in that organization.

If with silvestrism the lobby hunting force against the European legislation for the protection of birds, they do not leave out the state regulations. They wish they could hunt within the national parks. In general, sport hunting –and fishing– in these protected areas is prohibited, at least, since the 2007 Law of the National Parks Network. Even this provision was maintained by the new legal version of 2014, promoted by the PP, which did introduce a six-year extension to adapt the law in parks where there were, for example, hunting grounds as in Cabañeros. The term provided for in that law expired on December 5, 2020.

Since last September 22, the Iberian wolf is protected throughout the national territory. All its populations were placed on the list of species with special protection (LESPRE) as advised by the Scientific Committee of the Ministry of Ecological Transition. In this way, the generalized hunting of the species was banned. Until then, Spain had a double status: protected south of the Duero River and hunted to the north.

The decision has been accompanied by an endowment of 20 million euros for the autonomous communities in the project of General State Budgets for the management of canines and their coexistence in livestock areas. However, this measure has made Castilla y León, Asturias, Galicia and Cantabria come together to try to reverse legal protection.

Some of these autonomies, such as Castilla y León, had been establishing annual quotas of specimens for killing wolves in commercial hunts. Others turned to hunters to, in their words, "control" the wolf population. In this context, the hunters ask that the species cease to be armored in a general way, with which they would once again have this species among their potential trophies. They demand "the immediate withdrawal of the inclusion of the wolf in the LESPRE".

Another species that they want to kill again without much restriction is the European turtle dove. And, once again, his wish collides with the legal protection provisions: Spain has opened another sanction file in the European Union for not having sufficiently protected this species of bird. The European Commission already wrote a strategy for the turtle dove in 2018 which called for a moratorium (not a definitive ban) while evaluating whether there is room for sustainable hunting levels of turtle doves, whose population falls.

Spain was not taken for granted. Ban orders continued to authorize hunting of the species. The file arrived, which progressed until a final notice was reached in December 2020. Spain has argued before Brussels that a level of 400,000 doves killed per year by shotguns is "sustainable". It is waiting for an answer. However, the autonomous communities have been decreeing moratoriums on their territories. This summer the turtle doves have been safe, which has caused Artemisan to include among its demands "the sustainable hunting of the turtledove."

Partridges and quails stand out among the preferred prey for small game in Spain. Only between these two varieties there are about 3.5 million dead specimens each year, according to data from the Ministry of Agriculture. The thrush is also highly sought after. These and other species have already been the subject of a first review of their status in the European Union. The lobby hunting understands that this analysis can lead to a decision similar to the turtledove and asks that these varieties not be included in the red list of the International Union for Conservation of Nature.

But the IUCN It is an entity that brings together 1,500 organizations; it does not depend on the Government of Spain. It includes states and government agencies, but also NGOs, scientific and business associations. Its red list is accepted as an international gauge of the status of wild species.

Concern for the populations of many bird species in Europe is on the table. In April of this year, the group of European experts on the Birds and Habitats directives made a first approach and determined that 40% of trophy hunting species present a worrying situation: "unsafe" status, they call it. And they asked to analyze if hunting plays a relevant role in its decline, what could be an allowable catch quota or if a zero quota would be necessary. That is, hunt less or hunt nothing. The red partridge, quail and thrush appeared on the list.

In the list of regulations that this lobby wants to modulate in its favor there is not only what and where to hunt but also with what to do it. They have included the "no ban on lead." Much of the ammunition used in the preserves is made from this toxic heavy metal. Its harmful effects on organisms are already proven. The problem lies in the large amount of ammunition that does not reach the prey and, once fired, it remains scattered throughout the ecosystems. It poisons food chains when ingested by various species.

The European Chemicals Agency analyzed the problem and issued a report in 2018: lead spread by nature by hunting ammunition is not only an environmental risk but also poses a health hazard. With this evaluation, the European Commission has been preparing new regulations.

In January 2021, a new European regulation prohibited the use of lead in any wetland (whether it had a legal figure of protection or not). And he suggested that these pellets be replaced by steel ones. It does not prevent hunting, but rather using lead to kill waterfowl (especially vulnerable to lead poisoning they ingest the pellets that remain in their habitat). The hunters reject this change. They argue that steel ammunition is still too expensive and that it bounces more, making it more dangerous.

The manifesto is completed by asking that hunting be promoted and "defended" as a "key" tool both economically and socially. One of the arguments most exhibited by this sector is its boost to income in rural municipalities. But they also add their ecological utility. The Popular Party in Congress already supported this conception in 2017 when trying to get the Cortes to grant hunters the distinction of nature conservators.

They finish this section by trying to add to the Education Law "an adequate use of the term 'empathy with animals'". Hunters have long been concerned about bringing some kind of promotion of their activity into the classroom (the number of licenses has fallen by up to 16% in recent years, according to the Agriculture registry). That concern illustrated the cover of the magazine Jara and Sedal that showed a boy with a shotgun and a partridge and that TVE (which shares the title of the publication with a La 2 program) admitted that it caught him by surprise. Extremadura, for example, welcomes the teaching of hunting to primary school students for its "sporty" character, they say.

In addition, the hunting sector has targeted animalism as the adversary that has inspired the latest regional laws that came to regulate its activity.