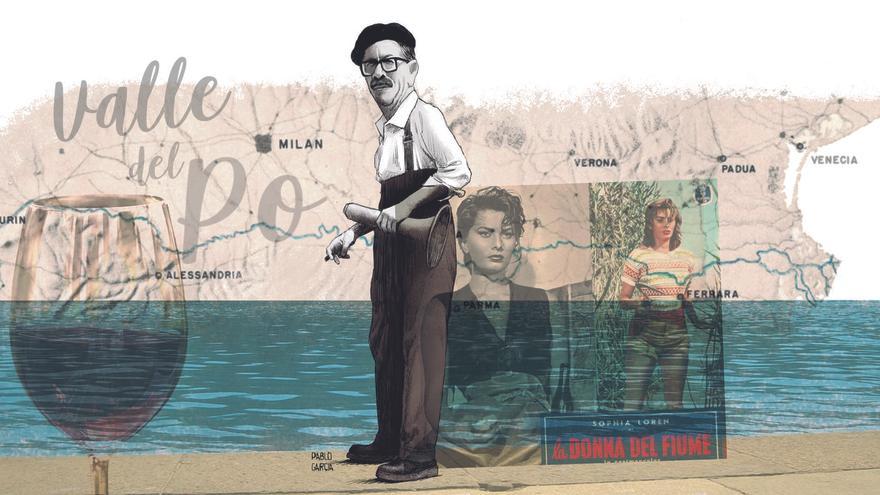 This human face of food is represented in the twelve episodes of Alla ricerca dei cibi genuini. Viaggio nella Valle del Po, which Italian radio and television recorded in 1957 when it had only been broadcasting for just three years. The team that produced the program, cameras and sound, consisted of more than ten and a half people who moved from one place to another in a convoy of six vehicles, a truck and a minibus. It seemed one of those companies of comedians from the league that toured our country in the years following the civil war. In front was Mario Soldati, with his unmistakable beret, his plastic-rimmed glasses and his trimmed mustache. At that moment he decided to undertake the search for happiness by interviewing a fisherman on a river bank or a peasant who cultivates his garden.

The official birth of television broadcasts in Italy was a fundamental milestone for the effective dissemination of the language and the feeling of belonging to a country. Soldati, who inaugurated them, created with his historical report a new figure, that of the enogastronomic journalist, and inaugurated a style that, far from wearing out over time, has grown under the name of slow food. Seeing the images of the series so many years later means plunging into another world without artifice, direct and frank. The Italian and even more the one who is not, learns to distinguish between the anolini, the original egg pasta from Piacenza, and the cappelletti from Emilia; the different cooking techniques for guinea fowl (pharaoh), or the links that culatello or polenta have with history. Or it allows you to chase the thistle from when it is dug up in a plain near Chieri until it reaches Turin to immerse yourself in bagna cauda, ​​that hot Piedmontese sauce made with garlic and anchovies.

The Po route is poetic and at the same time practical: in the choice of places the author allowed himself to be guided by the climate and traditions, leaving open the possibilities of returning and discovering a new wine, a food or a different crop, depending on the the seasons. Everything seems to be linked to the optimistic and cheerful character of Soldati, who is the owner of an amazing teaching capacity. The processes of making cheese, or a sparkling wine, continue to be didactic examples never before achieved in other documentaries of this type and less so in the years in which the series was broadcast.

Soldati teaches that food is the principle of our identity. He also maintains that good taste is unconscious and involuntary. Years later, in the seventies he would write Vino al vino, the book that I have read that best collects the work of farmers in the vineyard and in which he encourages people to get to know the land where it is grown in order to really enjoy the fruit. Wine cannot come to you, you have to go to it. For Soldati, as it was later for Luigi Veronelli and Paolo Monelli, food is culture, traditions are nothing more than a form of language with which a population and its territory are expressed; in this sense it is a sacred duty to preserve and transmit them. He was born in 1906 in Turin and died in 1999 in Tellaro, one of the most beautiful villages in Italy, the sixth of the Cinque Terre. He only lived in the 20th century. The years in which he recorded his gastronomic documentary series were those of the malora, as defined by the writer and partisan Beppe Fenoglio, in which the peasants moved to the city as workers; the years when poultry began to be raised in warehouses, fed with other animal meals and American soybeans; times when farms began to take on the appearance of space bases like Cape Canaveral. Some of that also echoes in our memory.