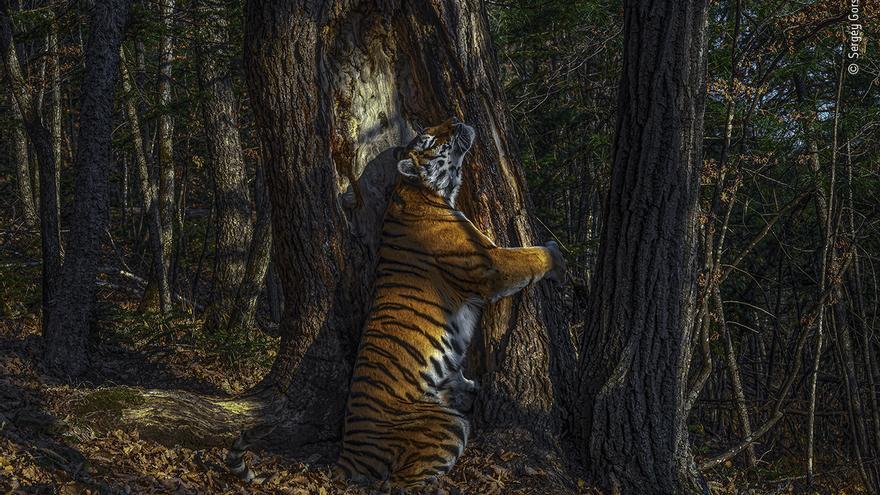 A tigress walks through the Leopard National Park in Russia. Suddenly, he sees the trunk of an imposing fir tree, stands up on his two hind legs and embraces it. He rubs his claws and cheek along the bark to leave secretions from his olfactory glands, all with an expression of pure ecstasy. She is an Amur tiger (known as Siberian), a species hunted almost to extinction during the 20th century that still struggles to survive today.

Despite the scarcity of Siberian tigers, Russian photographer Sergey Gorshkov set out to search the forest for signs, such as smell, hairs, or scratches, to find routes they used to pass through and to install camera traps, which activate automatically when they detect A wild animal. He installed the first camera in January 2019, and it wasn’t until November that he achieved what has now been awarded the best nature photo of the year by the Wildlife Photographer of the Year, a competition organized annually by the Natural History Museum, London. .

“It’s a scene like no other. A unique glimpse into an intimate moment deep within a magical forest. The rays of the low sun during winter highlight the centuries-old fir tree and the fur of the huge tigress as she clings to the log in obvious ecstasy, inhaling its aroma and resin, leaving its own mark as a message. It is also a story told in glorious colors and textures of the return of the Amur tiger, a symbol of Russian nature, “said Rosamund ‘Roz’ Kidman Cox, president of the jury. of the contest.

The other big winner is Liina Heikkinen, winner of the nature award in the 15-17 year old category. He captured a hungry fox feeding on a white-faced goose, a typical bird of northern Europe and eastern Greenland, while trying to keep the rest of his siblings eager for a piece at bay.

The two winning images were selected from 19 categories that seek to represent the great diversity of the planet, among which are ‘Plants’, ‘Birds’ or ‘Invertebrates’, among others. We review them.