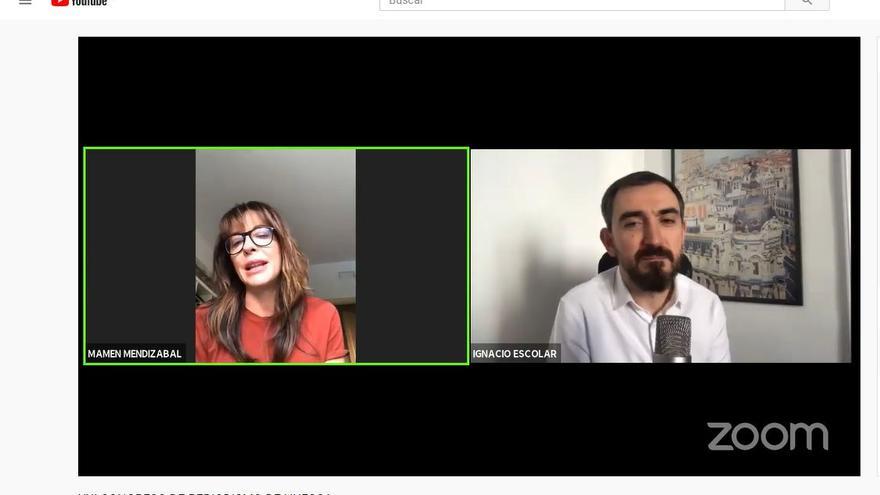 The Huesca Journalism Congress has also adapted to the circumstances. The traditional appointment in March in Huesca has been moved to October 1 and 2, with all the presentations online and with a record of registrations, which have exceeded 1,000. The pandemic, how could it be otherwise, has been the protagonist during the morning.

The director of the Huesca Journalism Congress, Fernando García Mongay, recalled that “this congress has brought together thousands and thousands of congressmen in the city of Huesca over the past 20 years, in an appointment that is not only limited to lectures and round tables, but also extends to workshops, meetings, exhibitions ... ”. Despite the new format and date, the Congress director stressed that this edition "is the busiest in history, with more than 1,000 participants."

During the inauguration, the “virtual” delivery of the José María Porquet Award was made to the Aragonese journalist Mavi Doñate, TVE's Asia-Pacific correspondent. The jury, which unanimously awarded the award, wanted to distinguish “the work done in covering the coronavirus pandemic, and its contribution to the information that must be done from a public medium, as well as its work through social networks to show how this information is carried out ”.

Enric Juliana, deputy director of La Vanguardia, correspondent and essayist, and Jesús Maraña, editorial director of Infolibre and political analyst in the media, opened the day with a dialogue on current affairs in the sector, marked by the COVID-19 pandemic. 19, digitization, political polarization and a new media revenue model.

The conversation between the two journalists has addressed the changes in journalistic routines brought about by the confinement in March and the high increase in digital audiences of the media. “The media decided to open the content that they had limited to subscribers, considering that it was their obligation as a public service. Journalism has once again performed an essential service for citizens ”, emphasizes Enric Juliana.

For Jesús Maraña, the pandemic accelerated three processes: “The growth in subscribers and audiences, the reduction in advertising revenue and the increase in efforts that come directly from readers, and finally, the public's reaction to misinformation and hoaxes that it has led them to look for credible means of reference ”.

The coronavirus has also been present in the second conversation between Ignacio Escolar, director of eldiario.es, and Mamén Mendizabal, journalist from La Sexta. "9/11 seemed to me to change the world, but this has had a greater impact," said Mendizábal. A statement signed by Ignacio Escolar: “With the pandemic, social and political changes have accelerated ... that were already underway, such as the role of China or the brake on globalization. And it has also happened in the world of communication ”.

"It has been a widely broadcast, highly visualized crisis," said Mamen Mendizabal, coinciding with Escolar, who stressed that one of those relevant changes has been the preponderance that television has acquired during the evolution of the pandemic "as a means to give live information, open to all ”.

They have also highlighted as another of these relevant changes the growth of subscriptions to digital media during this pandemic. Escolar has pointed out that in the case of eldiario.es, this growth has meant that currently 55% of the expenses are already covered with the membership fees, despite keeping open access to their information and both have defended the danger that the walls keep many people out of access to information.

"Politicians, not politics, are once again one of the main problems for Spaniards", this is how Mamén Mendizabal defines the current political situation. During his talk with Ignacio Escolar at the Huesca Journalism Congress, they spoke about the current situation, about what is being experienced in Madrid and he assures that “politicians are wrong”: “Polarization leads to the virus getting stronger , for the pandemic to gain more strength, because while we think the disease follows its course alien to the battle and polarization ".

The current political tension has also been a topic of reflection on which both have highlighted. "Politics is the fourth great crisis of this moment, after health, economic and social," said Mendizábal to which Escolar has exposed his fear "that the media will contribute to it, focusing our information only on controversy and the rough debate ”.

This tension also appears in the debate on social networks, which has affirmed confidence in the traditional press, according to Escolar, although both have valued the bidirectionality that new technologies allow between media and readers. In this regard, Mendizábal has denounced what he has called "infodemic", such as information "that reaches citizens through WhatsApp and gives them more credibility than the serious media."

For Juliana and Maraña, polarization is not an adequate way to recover media credit. Hence, Juliana wondered if there is space in Spain for a journalistic offer that is not based "on the food of tension."

Digitization has led to content segmentation and the media have joined in on this trend. This means that they move away from the role of generalist media that predominated a few years ago, when the contents had a more global orientation towards different profiles of audiences.

Science journalism in the pandemic

Information about the pandemic has marked 2020 for the media. Scientific journalism, used to having small spaces and far from the front pages, has been the undisputed protagonist of the year and everything indicates that it will continue to be so.

Alberto Sicilia has moderated the round table 'The challenges of reporting a pandemic in real time', with the presence of the director of the Sinc agency, Pampa García; the scientific journalist of El Confidencial, Antonio Villareal; and the doctor specializing in scientific dissemination who has reported the pandemic in eldiario.es, Esther Samper.

The speakers have related the trends marked in public opinion in the first weeks. On the one hand, there were accusations of exaggeration towards some media and on the other, there were calls for caution. The diverse information and opinions from journalists and experts made these first coverage of the new coronavirus difficult.

Antonio Villareal reflects on how the tendency of many journalists was to measure the messages they launched with their reputation in mind: “Perhaps information could be considered alarmist in the future and affect the journalist himself, hence many colleagues added to say that we were facing something similar to the flu ”.

The round table has also dealt with the communication of the World Health Organization. “The WHO is very conservative and only changes its position when it has a lot of scientific evidence. In that sense, it is easy for me to arrive late and there are times when the population receives contradictory messages from different health authorities ”, explains Esther Samper.

For the guests, the communication of the pandemic has taught journalists to be more restrained and rely on scientific evidence when reporting on this matter. In this sense, they have commented on the controversies created around the various scientific studies disclosed in conventional media before being reviewed and published by scientific journals. This fact has caused a diversity of opinions in the scientific community and has offered very diverse explanations - not all valid - to the public.

The congress continues this afternoon with the payment wall, the climate crisis or visual journalism

At 3:30 p.m., the connection with Eduardo Sánchez's lecture, 'Make Readers Pay', will be resumed, the communication director of the Reuters Institute for the Study of Journalism at the University of Oxford, will address one of the main challenges of the digital media: how to build a good subscription model.

Informants who have decided to leave journalism and intervene in politics, such as Begoña Floria (PSOE), Pablo Montesinos (PP) and Alberto Bonilla (Cs), will share their experience and the reasons that have led them to take this step.

The afternoon will end with a talk on visual journalism, where the visual journalist Almudena Toral, head of the video team at Univisión Noticias Digital, and the photojournalist Judith Prat, will talk about the power of the image to invite reflection on the difficult conditions of life on the border between Mexico and the United States. Almudena Toral will delve into the new documentary and digital narratives on immigration in the Trump era while Judith Prat will show the struggle of women against the stark violence that is experienced in the Mexican town of Ciudad Juárez, on the border with the United States. A table moderated by the eldiario.es journalist Gumersindo Lafuente.

Fernando Garea will be in charge of the closing of this edition of the Huesca Congress. The former president of the EFE Agency will offer the closing talk in which the journalist will reflect on the combination of journalism and traditional media with the new narratives, as well as the main challenges of the change process developed in the EFE Agency.