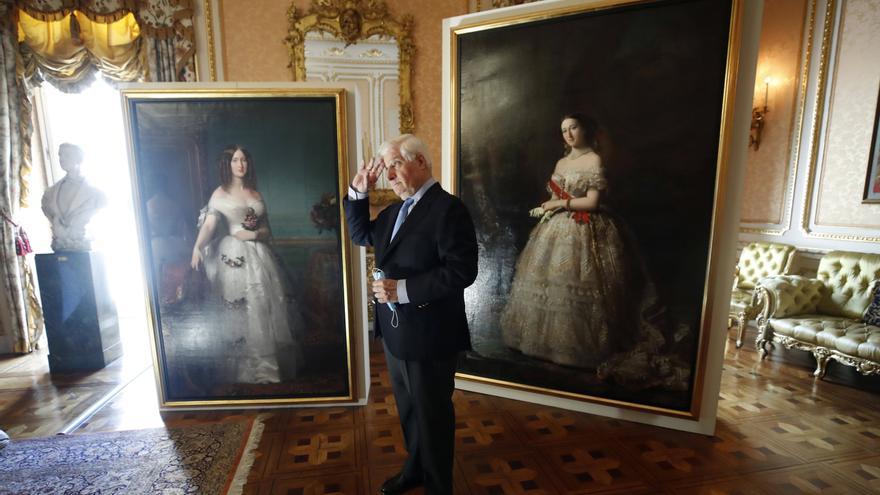 Madrid, May 25 (EFE) .- Eugenia de Montijo’s paintings, furniture, porcelains and personal objects are exhibited in the Liria Palace to bring the visitor closer to the life and legacy of who became Empress of France.

“She was a very cultured person, who liked art very much and was very important at the time, for example in the development of the textile industry, and she was very good and also very pretty,” said the current Duke of Alba today. Carlos Fitz-James Stuart and Martinez de Irujo, who briefly participated in the presentation of this initiative.

The Liria Palace, which opened its doors permanently as a museum in 2019, has reformed its itinerary – which is always guided – to bring the character of Eugenia de Montijo closer to the visitor.

The Spanish woman, one of the most famous women of her time for her marriage to Napoleon III, was the sister of her great-great-grandmother, María Francisca de Sales Portocarrero, better known as Paca Alba, XV Duchess of Alba.

When he died without heirs -in the Liria Palace in 1920-, a large part of his inheritance was bequeathed to the House of Alba and today it can be admired during the visit.

All the rooms on the tour include, from today until December, objects of the then empress, from part of her collection of decorative arts to personal objects, but also paintings that until now had remained in the private rooms of the family. The Palace has also opened two rooms that are usually closed to the tour.

Two of the most important paintings, which are seen for the first time, correspond to Eugenia de Montijo and her sister Paca de Alba, painted by Federico Madrazo.

Both sisters appear very young. Eugenia de Montijo, barely without jewelry, in a white satin dress, without crinoline, the uncomfortable corset required according to the dress codes of the time.

“Paca wears a crinoline but Eguenia does not, she was always well ahead of her time, she preferred to opt for more comfortable outfits. She was a woman who created a trend, a true arbiter of fashion ”, explains Álvaro Romero Sánchez-Arjona, a member of the Alba Foundation.

Fashion was one of the most prominent sections of her social life: she was a sponsor of the French textile industry and the English couturier Charles Fréderic Worth, creator of women’s haute couture, whom, for example, she asked to make a hundred suits for her. inauguration of the Suez Canal.

The two sisters were educated in France, where their family moved after their father, Cipriano Portocarrero y Palafox, was exiled after fighting alongside the French in the War of Independence. When his father died, his mother took it upon herself to marry both of them: one to the Duke of Alba and the other to the new Emperor of France, Napoleon III.

Among them they spoke French, as can be seen in some of the letters displayed in the library. The exchange of letters with famous people in history such as Sisi Empress, Queen Victoria of England, or the Kaiser II of England is also exposed. The Liria library keeps more than 350 files of the empress.

“His life was a path of joys and sorrows”, summarizes Romero Sánchez-Arjona.

Her arrival to the throne with Napoleon III was not as she had thought, since her condition as a foreigner meant that she was not well received by the court or the people, nor was Marie Antoinette, with whom she felt very identified.

When the Third Republic arrived, he fled France fearing an end like that of the then empress and went into exile to England. There, three years later, the emperor would die of illness, and six years later, his son, in the Anglo-Zulu war in South Africa. The empress survived him 40 years, in which she always wore mourning.

Curiously, she died in the Palacio de Liria, where she used to reside when she visited Spain, something she did very regularly, since she was very close to the then Duke of Alba, her great-nephew. On the tour you can see a photo of his last weeks.

When she died she was in Spain to undergo cataract surgery, something that she was looking forward to in order to be able to read “Don Quixote” again, one of her great hobbies. “He was a very cultured person,” emphasizes Romero.

As proof of the close relationship with his great-nephew, a portrait of the aristocrat painted by Sorolla has been included, which he had made to give to his aunt and which is usually in the Dueñas Palace.

Eugenia Montijo left her great-nephew a large part of her collection of paintings by Winterhalter, Sorolla or Madrazo, as well as an extensive collection of decorative arts that includes porcelain from Sèvres, or a large collection of clocks, many of them permanently included in itinerary.