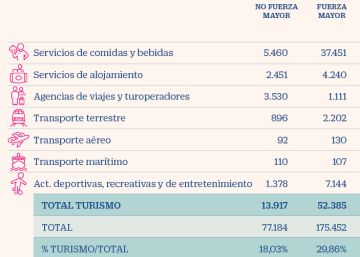 NH is left alone for now when it comes to moving from ERTE to ERE. The chain controlled by the Thai Minor announced last Friday the start of negotiations to make a collective dismissal in its central services, where 639 people were in ERTE for productive causes since last July. Meliá, Barceló and RIU (Iberostar declined to offer information) will continue to bet on prolonging the ERTE of force majeure and they have included an important part of their workforce in this mechanism, waiting for demand to reactivate with the arrival of the high season and the acceleration of the vaccination process. According to the latest data from the Ministry of Labor and Social Economy, January closed with 440,000 jobs suspended in tourism, 59.6% of the total. Of these, 113,000 corresponded to hotels, 25% of the total, only behind bars and restaurants, with 244,000 workers at ERTE.

Among the big ones, Meliá stands out. Of the 8,000 workers in Spain, it has more than 5,000 with employment suspended until May 31, the limit set in the new extension approved by the Government. “We believe that the companies that are more focused on the leisure segments or that combine leisure and business on the beach have a competitive advantage over the urban area,” they emphasize from the hotel managed by Gabriel Escarrer.

In their opinion, the recovery of tourist flows and employment will not be rapid, if not progressive, which is why they predict that the levels of activity and income prior to the crisis “will not recover until at least 2023 or 2024”. Far from the most optimistic prospects of some businessmen, including Gabriel Escarrer, the CEO of Meliá, fingers crossed that recovery could begin at cruising speed at Easter or summer.

Riu is in the same situation as Meliá, with 56% of the workforce in Spain with suspended employment (2,049 workers). Quarantines and the closings of large international markets, such as the United Kingdom or Germany, together with movement restrictions between autonomous communities (which prevents the movement of large issuers such as Madrid or Catalonia) have led the Balearic hotel company to a conservative attitude. “In the year of the pandemic, we have learned to open and close hotels in a matter of days when before the operation could take weeks,” Riu sources emphasize, pointing out that they will not remove workers from ERTE until there is a lasting perspective of business. “For now, the occupancy in some hotels is being achieved with national tourism that teleworks from Monday to Friday or with unexpected groups.” In the latter case they stand out the case of the hotel he has in Zanzibar, which has had to hang up the entire poster thanks to the massive arrival of Russians and Kazakhs.

Barceló is also not immune to the absence of tourists since March 2020. “Barceló only has half of its hotels open at present, which has meant that we had to extend the ERTE for a large part of the workforce until May 31, with which there will be no reactivation of employment until that date ”. One of the latest disappointments It was the closure of the vast majority of the hotel plant in the Canary Islands (17 hotels between Fuerteventura, Lanzarote, Gran Canaria and Tenerife) due to the sudden closure of the large issuing markets, such as the United Kingdom or Germany, and the poor health situation in the archipelago

Specific. The most used instrument was the ERTE by specific sector, with 182,561 suspensions. This mechanism recognized tourism as one of the most affected by the coronavirus.