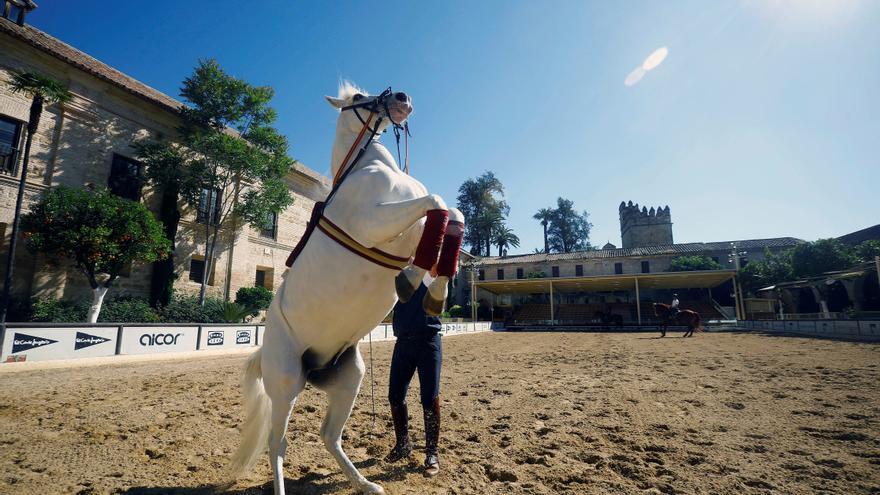 Córdoba, May 1 (EFE) .- The Andalusian horse, through the show 'Pasión y Duende del Caballo Andaluz' of the Córdoba Ecuestre association, is the starting point of the reunion of the city of Córdoba with tourism in its stellar month , May, in which it concentrates traditional celebrations and tourist attractions.

Córdoba Ecuestre has been able to activate the show in 48 hours, with half of the staff in an ERTE, the other half will be reinstated next week, and with the quality of being able to mount a second show on the fly if the public demand It justifies it, since, when the preparations were finalized early this Saturday, it already had half of the capacity sold despite not having publicized it.

For Rafael Blanco, president of Córdoba Ecuestre, this is possible because the entity has an agility, which should be cloned "to manage other public spaces in our city", which gives it its status as an association with "a very important private presence, of sectors equestrian and business, and another very important public part, represented by the City Council, the Provincial Council and the University ".

"This balance allows management, from public objectives, with a flexibility that the City Council itself could not have on a day-to-day basis, which is what makes us competitive and give an immediate response with great agility," he reasoned during a conversation with Efe. .

Regarding the reaction registered when returning to the activity, with fifty tickets sold out of the one hundred that the Royal Stables riding arena makes possible in the current sanitary conditions in just twenty-four hours and without advertising, he considers that "sometimes we forget in Córdoba that the show is, at this moment, one of the best in Europe and among the two best in Spain, along with Jerez de la Frontera. "

In his opinion, "only Jerez and Córdoba can provide an equestrian show of international level with which it is seen here and that means that we have become, almost without realizing it, the second great offer for the public in our city" and, in fact, pre-pandemic data gave 60,000 viewers in 2019.

Blanco highlights that one of the characteristics, apart from quality, is that it is a call for the whole family, in "which mixes two concepts that are very attractive, the art of the horse, with very complex movement, and the combination of music and flamenco ".

Caballerizas Reales is a bustle of workers that multiply between the decorating of the horses and the preparation of the track of its riding hall, one of the two high-level of the three that Córdoba Ecuestre has in the enclosure, paid for with its own resources, such as all the facilities deployed in the monument, which has been given precariously by the City Council although it is owned by the Ministry of Defense, with whom the municipal institution negotiates an expropriation for its definitive pass to the city.

The relationship with the City Council is now fluid, with the unblocking of aid that "before we were not given" by the mayor, José María Bellido (PP), although without the support of the Citizens part of the municipal government, which manages the Tourism Area, from which no resource has come, says Blanco, which seems to him "an absolute contradiction" since the equestrian show is "one of the most powerful tourist offers in Córdoba."

During the closure for ten of the last twelve months, the last time it opened them was last January, Córdoba Ecuestre, which generates 90 percent of its income in the market, has resorted to an ERTE and an ICO loan and is now preparing a gradual recovery of the activity, based on the influx of tourism and in the confidence that the Mayo Cordobés, which is resumed on Monday with the commemoration of the centenary of the Festival de Patios, progress towards a greater demand for programming and the putting into progress of the rest of the activities, such as the opening of the Stables to visitors.

Córdoba Ecuestre is already preparing "a great Cabalcor", the Córdoba International Horse Fair, for September, in the perspective that it is a "good moment" in the health situation, it is preparing to resume international departures in 2022, so far two per year, and face its project for an international horse center, which will have to be determined when the City Council decides with Defense the transfer of the monumental complex and, in turn, the way in which it formalizes the presence of the association in the facilities that it maintains. open since 2010.

The enclosure that the entity manages, Caballerizas Reales, houses a historic building that, by decision of Felipe II in 1572, welcomed the breeding of the horses of the Royal Family and that is considered one of the cradles of the Purebred Spanish horse.