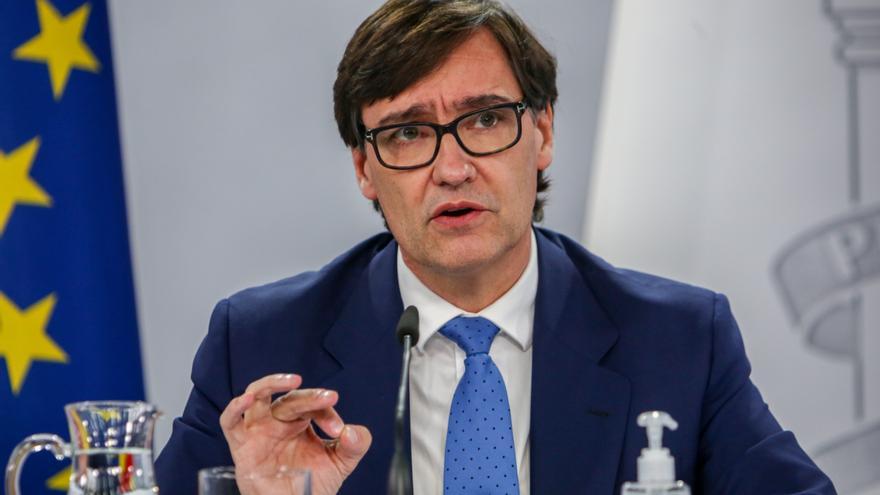 The Minister of Health, Salvador Illa, and the director of the Center for the Coordination of Health Alerts and Emergencies, Fernando Simón, have appeared just after the COVID-19 monitoring commission chaired by Pedro Sánchez and just before meeting with the group of coordination with the Community of Madrid. Also just after the regional president, Isabel Díaz Ayuso, and the mayor of the capital, José Luis Martínez-Almeida, who have demanded that the state of alarm decreed last Friday be withdrawn because Madrid has fallen from an accumulated incidence of 500 cases. Illa, for the moment, discards it: “We must act prudently” with the data, and “the horizon that we have set is 14 days”, which are those set by the Royal Decree on a state of alarm.

The minister has also recognized that he “worries about things” about the figures that Madrid is giving, “I am not saying this as a reproach” but as a “confirmation”, and in any case, “due to the volume of cases” that exist in the region, “not due to the negligence of technical and health officials”. He refers, he has specified, to the delay “between 5 and 8 days” of the consolidated figures; and the decrease in PCR tests that are performed, “40.3% less” according to their data compared to the last week of September. “We all know” that this happens, it has had an impact. “I know that antigens have been tested” but even so, but even so the drop is very large and “you have to assess the data with caution.”

Illa recalled that the cumulative incidence rate of 500 cases is one of the three thresholds set by the communities for the perimeter closure of municipalities with more than 100,000 inhabitants. It is also necessary to reach thresholds of 10% positivity – the amount of CRP that confirms infection – and 35% in the ICU.

Salvador Illa has been asked about his interview this morning on Cadena SER, in which he stated that “the accumulated incidence has to fall much more”, “not below 500, but below 200 at least.” specified if the government’s idea is to extend the state of alarm until reaching those rates –for which they would need support in Congress–, but it does mean that “you have to have this horizon and the CCAA are responsible for taking the set of measures” for this. “We all have to be in a cumulative incidence of 100”, he repeated, and also with other values ​​such as “positivity of 3%”. In this period of 14 days they will see “what measures they plan to put into practice to go down not from 500, but from 400, 300 or 200 “. The coach Fernando Simón, two weeks ago, already set the goal that had to be reached there, well below 500.