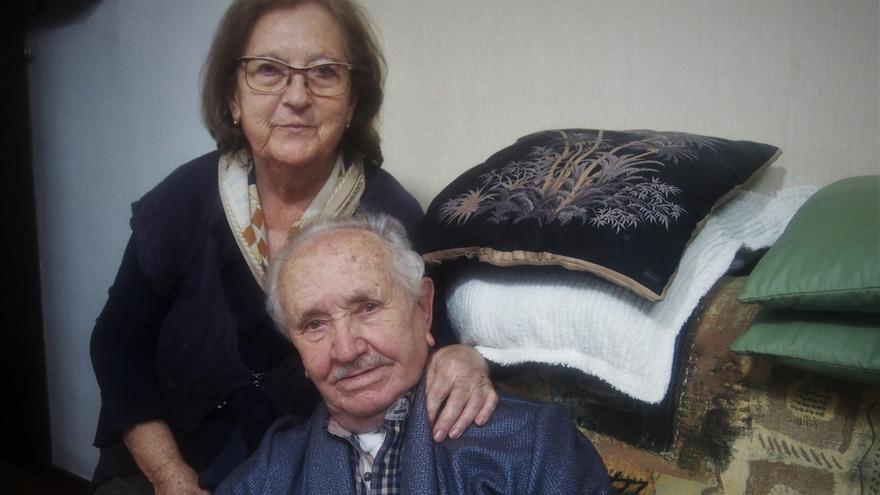 Jesús Blasco turned 88 on Christmas Eve. He lives in a small apartment in the Barcelona neighborhood of Vall d’Hebron, very close to the homonymous hospital where he was treated for throat cancer diagnosed in 2017, after two years of severe pain during which, despite having visited various doctors, the diagnosis eluded him. When, finally, they knew how to name his ailment, the sentence was firm: either you have surgery or you die. “When they told me that, it was clear to me. I am resigning from life,” he remembers.

“I was 85 years old, why was I going to operate to live little and badly? I wanted to leave with dignity,” he says. As the weeks went by, the pain became unbearable. He couldn’t swallow or eat and several times he thought about how he could leave. But at that time euthanasia was still prohibited and what was his intention to wait for death placidly became a scene of tremendous pain and the worst of endings. “The law, then, only gave me the opportunity to refuse treatment, and I did. But the alternative was to end up drowning.” So Jesus backed off and had surgery, he explains while repositioning the tracheostomy tube, the result of the intervention.

When he learned of his diagnosis, he immediately approached the Right to Die with Dignity (DMD) association, which confirmed what he already knew: his options to end his life were limited and illegal. And, if he decided to go ahead, he had to do it alone. “I had surgery for the same reason that I defend euthanasia: because I don’t want to live what I have left suffering,” he says. He remains firm and faithful to his ideals, so much so that after spending five months intubated after the operation, he refused to have the probe placed again: “Not torture for me!” He exclaimed at the hospital. And, despite the doctors’ recommendations, who forbade him to ever eat again, he refused: “I cannot live without eating and, therefore, if I cannot eat, I will kill myself,” he says.

Jesus conveyed to various doctors his desire to die if his situation worsened, “but they turned their backs on me and I understand it. I don’t want anyone to suffer the consequences of my actions,” he says. Jesus, despite being strongly advised against, ate again: “Just as I assumed that risk, I will assume my own death when the time comes, whether there is a law that prohibits it or not,” he says, referring to the legalization of euthanasia approved by the Congress. Jesus is not too confident with this law, which comes after 36 years of struggle and 17 rejected legislative proposals. “It is a big step, but there are many people who have suffered real torture for too long. When I see the first case, I will believe it,” he says.

One of the families that suffered is that of Carme Barahona, whose 43-year-old son Iván made the decision to die alone and without assistance three years ago, after having lived with amyotrophic lateral slarosis (ALS) for two years. Ivan suffered a rapid and aggressive degradation that would have resulted in the same end as the one that awaited Jesus: to die by drowning. “The day of the diagnosis, he assured me that he would not go to the end,” says Carme, who from the first moment accepted her son’s decision. “I could not force him to stay with me because the price he would have to pay for my selfishness would have been excessive,” he says.

Ivan was afraid and didn’t want to die, but he didn’t want to suffer anymore. “My son was a wild hawk and ALS is a cage the size of a parakeet,” explains his mother. So when he saw that he couldn’t take it anymore and that his disability was becoming serious, he began to investigate how he could die peacefully and without involving anyone from his family or friends. Before the euthanasia law, helping someone to perish was a crime that could carry jail time; therefore, Iván was forced to advance his death in order to die alone.

“Waiting meant that tomorrow he might not be able to move his hands and he would not be able to take the medication alone. What if he dropped the bottle? What if the bitterness of the product made him vomit? What if it didn’t work well and he couldn’t call no one to ask for help and spent hours dying? ” These questions consumed Ivan’s family day after day, who was putting off the end. “It’s never a good time if you really don’t want to die just yet,” says Carme. But the disease had started the countdown: “We could have waited months or even a year, but we did not know when the moment would come when I could no longer do it alone. And then it would have been too late. It is exaggeratedly hard,” he says.

Iván obtained the drug that ended his life online, almost clandestinely, without the help or company of anyone. “He kept us out of the whole process so as not to get us involved.” And in the same way his death passed. When the day came, Carme went to work and signed: “We all left because we had to have an alibi,” she recalls, almost ironic. He did not rest until hours later when he came home and embraced the inert body of his son. “The biggest pain I have is not because of his death, but because they forced me not to be with him, hold his hand and tell him that I loved him while he died. It was very hard to be at work when the last I heard from me son was a message that said “Thank you for taking care of me so much. I am going to rest”.

“My son was afraid and did not want to die, he just wanted to rest, which is very different,” explains Carme, who assures that the suffering that Iván felt was not so much due to the disease but because of the unknown of an insecure and lonely death. “There are many people who need this new law,” he adds. The legislative proposal, which is expected to come into force in March, is a great step for many people who “will be able to extend their lives until the moment they really want to leave and they will be able to do so in peace and accompanied,” says Nani Hernández, vice president of the Right to Die with Dignity (DMD) association.

However, although she is “satisfied” with the law, she admits that it is not what she would have liked. “It leaves many assumptions, such as that of minors, since it does not contemplate informed consent, or that of people with mental illnesses, ignoring that psychological suffering can be worse than physical,” says Hernández. Another of DMD’s complaints is that the law does not cover fatigue. “There are those who are tired of living and that is as valid as wanting to rest from an illness,” says Hernández. And it is that the law only contemplates the assumptions derived from an incurable disease or that causes a “serious, chronic and disabling condition”, according to the text. “This law is of no use to me,” Jesús Blasco says: “Who will measure my pain and whether it is unbearable or not?”

This man, originally from Aragon, says he is still comfortable, despite the discomfort caused by his cancer. Jesus he spends the day surfing the internet and making videos with Photoshop and Movie Maker for his friends and family, which he posts on his Instagram account. He has had a “full and fast-paced life,” he says. “He lacks the hours of the day,” says his wife, Ana María, who solemnly agrees when her husband expresses his desire to die when all the hobbies that occupy the days are impossible for him. “I will do what I have to do,” Jesus says.

He assures that, if the law does not contemplate his case, he will manage to find something online to die. “I think I have what it takes to do it alone, but I wouldn’t want it to.” Jesus loves the life he has and the one he had and he shows it by talking for hours about his youth, how he met his wife at a summer dance and how he satisfied his hunger for reading by rescuing scraps of newspapers. He justifies his wish to die, when the time comes, by demonstrating an unsurpassed love for life. And Nani Hernández also thinks so: “Our struggle is not a cult of death: because we love life, we want it to have a worthy end.” An end that may come from the hand of a law that guarantees that no young person should die without shaking the hand of his mother or condemning an old man to die in hiding.