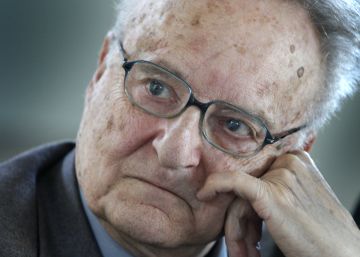 He prestigious Hispanic American Hispanic Gabriel Jackson, Who along with other foreign historians of his generation, such as Hugh Thomas or Herbert R. Southworth, contributed to a rigorous rereading of the years of the Second Republic and the Civil War, died Sunday at the age of 98 in Ashland (Oregon), as confirmed last night to EL PAÍS family sources.

Born in 1921 Mont Vernon, in the State of New York, within a Jewish family, Jackson graduated in History and Humanities at Harvard and Stanford, at the University of California, of which he was professor emeritus. Disciple of Jaume Vicens i Vives and the French Pierre Vilar, devoted much of his research work to the history of twentieth-century Spain, which he reached by various means that converged in reference works such as The Spanish Republic and the civil war (Review). The Spanish contest, he said, was the "first major event" of his political conscience. He was 15 when war broke out. Later, he traveled to Mexico with a scholarship in 1942 and there he came into contact with Republican exiles who fueled his interest in Spanish culture and the Hispanic world.

He received a PhD from the University of Toulouse with a thesis on the regeneration of Joaquín Costa, and in the French city he had contact with Spanish refugees again. He returned with his wife to the United States in 1952, where difficult years awaited him. Pursued by McCarthyism due to his leftist ideas, he saw the doors of the academy closed. Finally, he won a tenure at the University of California and in 1965 published in English The Spanish Republic and the civil war. Prohibited in Spain, it was translated into Spanish two years later in Mexico by the Grijalbo publishing house.

At the end of that same decade he traveled with a scholarship to Barcelona, ​​where unexpected possibilities for research were opened. “At that time, the Spanish authorities wanted to give the impression that Spain was totally free, and allowed me to have access to libraries and archives; But it was not true. It was mere appearance, because I could never have access to the Military Archive. However, I had an advantage abroad, because that access could not have a Spanish researcher. Everything was appearance, ”he explained in 2003.

That year he won the 15th Antonio Nebrija Prize, conceived by the University of Salamanca to distinguish and recognize the Hispanics who have excelled for their dedication to the study of Spanish language and culture. "Professor Jackson has marked for several generations of Spaniards access to knowledge of a fundamental stage of our recent history," said the rector of the University of Salamanca, Ignacio Berdugo, president of the jury. In 1966, he had also received the Herbert Baxter Adams Award from the American Historical Association for the same book, which distinguishes works on European history published in English.

Jackson He spent 26 years in Barcelona and in 2005 he obtained Spanish nationality. Five years later, he returned with his daughter to Oregon, in the western United States, where he died this Sunday. Jackson, EL PAÍS regular contributorHe was critical of the Spanish Historical Memory Law, but was in favor of creating a law of justice, with which the war councils of Franco had been canceled. His last book was Juan Negrín. Doctor, socialist and head of the Government of the Second Spanish Republic (Criticism, 2008), with which defends the figure of the vilified last head of Government of the Second Republic.

He also wrote about medieval Spain or the rise of fascism, as well as a novel biography of Mozart (The late Kapellmeister Mozart). He was a great music fan and a talented flute performer.

God, money and data: notes on the world to come | Babelia