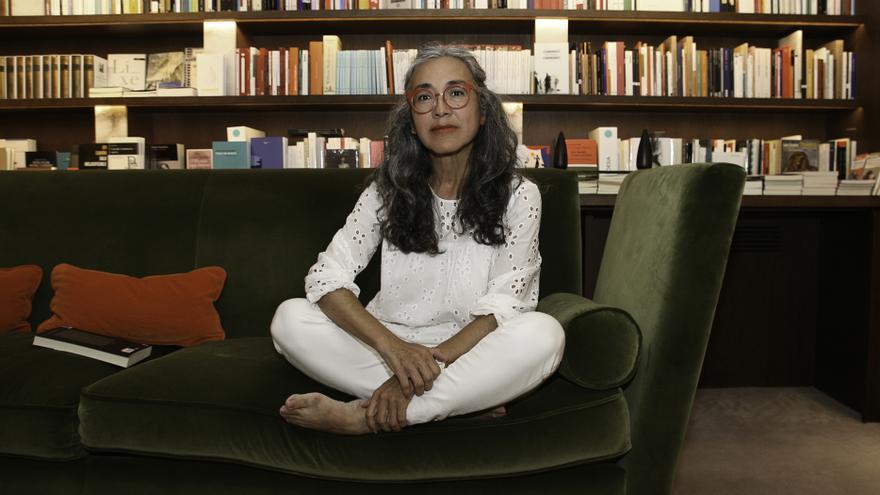 With the participation of 32 writers and a dozen prescribers (among them, editors, journalists, photographers and Mexicanists), the program will consist of 36 literary acts, Among which stand out the round tables on various topics, especially Mexican topics, the main events such as the opening, with the presence of the general director of the Book and Promotion of Reading, María José Gálvez, on Monday the 4th, the participation of the Mexican novelist Jorge F. Hernández on Tuesday the 5th, the dialogue with María Dueñas on Wednesday 6, the FHE's Great Poetry Recital on Saturday 9 in the morning, or the closing ceremony with the Sergio Ramírez Cervantes Prize on Saturday 9 at night.

On Tuesday 5 at 7:00 p.m. it will be held Juan Rulfo from inside and outside of Mexico, with the participation of the writer and professor from Princeton University (USA), Rubén Gallo, the writer, editor and director of the magazine Granta in Spanish Valerie Miles, the writer and editor José Esteban, the writer Cristina Rivera Garza and the moderator of the writer Anelio Rodríguez Concepción. On Wednesday 6, in addition to the participation of María Dueñas, there will be two main tables: at 5:30 p.m., moderated by the Mexicanist Sarah Kuźmicz, the novelist Mónica Lavín, the critic Christopher Domínguez Michael and the writer Cristina Rivera Garza will talk from the title Evocation of Sor Juana Inés de la Cruz: Mexican women today.

And at 6:45 p.m., the festival offers a table, also of interest due to the great representation of storytellers from Mexico that it has on this occasion, in which Hernán Lara Zavala, Antonio Ortuño, Socorro Venegas, Ana García Bergua, Enrique will participate. Serna, Elmer Mendoza and Mónica Lavín, from the title Contemporary Mexican tale.

On Thursday 7 there is an act dedicated to the Canarian writers in Mexico, with references to Mercedes Pinto, Juan Marichal and Agustín Millares Carló, in which Yolanda Arencibia, Blanca Hernández Quintana, the poet Federico J. Silva and the writer JJ Armas Marcelo will participate. And also a conversation about Octavio Paz and Carlos Fuentes, “bastions of Mexican literature”, with Alberto Ruy-Sánchez, Christopher Domínguez Michael, Andrés Sánchez Robayna, Hernán Lara Zavala and Aurelio Major, narrators, poets and critics who, in some cases They met both or at least one of these great authors: the first, a Nobel Prize, and the second, an eternal aspirant.

On Friday 8 there will be three main acts of the afternoon, highlighting the last one, at 8.15 p.m., on Frontier novel, crime novel and political novel, a conversation that the Cervantes Prize Sergio Ramírez, the novelist and poet Carmen Boullosa and the narrator Elmer Mendoza will have with the novelist David Toscana. At 5:45 p.m., the young novelist Mateo García Elizondo will talk with the narrator Enrique Serna and the editor Valerie Miles about someone very special to him and to all readers, his grandfather Gabriel García Márquez. While later, with the editor specialized in short literature Juan Casamayor (Foam Pages), Socorro Venegas, Blanca Hernández Quintana, Andrea Chapela, Elsa López and Myriam Moscona will talk at a table that will discuss the literature of Spanish and Hispanics through the memory of the Mexican writer Elena Garro, the poetry of the Canarian Natalia Sosa Ayala, recovered by the Government of the Canary Islands, and the anthology recently made and published by Juan Casamayor and Socorro Venegas highlighting the best Latin American authors.

On Saturday 9, in addition to the closing with the Sergio Ramírez Cervantes Prize, who will talk with the novelist JJ Armas Marcelo after a surprise in the form of images offered by the photographer Daniel Mordzinski, in the morning, the Grand Poetry Recital of the IV Hispano-American Writers Festival (at 12 noon), this year with a large representation of poets of the highest quality: none other than Elsa López, Myriam Moscona, Andrés Sánchez Robayna, María José Alemán, Carmen Boullosa, Cristina Rivera Garza, Federico J. Silva , Aurelio Major, Alberto Ruy-anchez and Lucía Rosa González. But the day will start a little earlier, at 10.15, with a conversation about "Mexican modernity" between the Mexicans Rubén Gallo, Antonio Ortuño and Ana García Bergua.

The first two tables in the afternoon, before closing, at 5.30pm and 6.45pm, will also have Mexican themes: Mexico and Spain: legends and exiles or Institutions of Mexico: Guadalajara International Book Fair, Fondo de Cultura Económica, Colegio Nacional and FONCA, in which Sealtiel Alatriste, Carmen Boullosa, José Esteban and Margarita de Orellana will participate, in the first, and David Toscana, Christopher Domínguez Michael, Yolanda Arencibia and Alberto Ruy-Sánchez, in the second.

The fourth edition of the festival also offers the possibility of invited authors to sign copies of their books to readers who come to the Plaza de España in Los Llanos de Aridane. Specifically, there are scheduled signatures of copies with the presence of the authors on Wednesday 6, Friday 8 and Saturday 9, in the morning, being that this year, when most of the events are held next to the bookstores in the same square , possibly any moment is propitious for an author who is enjoying the festival to sign a copy of his book to whoever he wishes.

On the mornings of October 6 and 8, many students from different educational centers on the island will attend the events programmed for them. On Wednesday 6, in "Mexico for beginners: narratives of Mexico and of these authors", Andrea Chapela, Mateo García Elizondo and Antonio Ortuño will talk with Sarah Kuźmicz. While Alberto Ruy-Sánchez and Margarita de Orellana will offer a talk about their emblematic magazine, Arts of Mexico.

On Friday the 8th in the morning there will be events both in the Plaza de España and in educational centers. In the IES Eusebio Barreto will take place The same language: a large territory, with the novelist and poet Carmen Boullosa, the secretary general of ASALE Francisco Javier Pérez, the poet Federico J. Silva and the poet Myriam Moscona. Instead, in the Colegio Sagrada Familia Nazaret Los Llanos it will happen Roberto Bolaño in Mexico, with one of the greatest authorities in the work of Roberto Bolaño, the American Valerie Miles, who will talk with Santiago Gil.

And in the Plaza de España, two events that will also be attended by students from centers in other municipalities on the island: "Stories about writers", in which the participants (Mónica Lavín, Anelio Rodríguez Concepción, Sealtiel Alatriste, José Esteban and Yolanda Arencibia), will tell stories of writers that are of special interest to them.

In the House of Culture of Los Llanos de Aridane the events will be held Socorro Venegas Readers and Cristina Rivera Garza readers, one on Tuesday and the other on Friday, in which readers of the latest books by these two authors will be able to talk with them, the audience being made up of high school students and members of various reading clubs. And, on Thursday morning, students from the Manolo Blahnik Art School will attend the "Editing Workshop" on how the magazine is made. Arts of Mexico, by its editor: Margarita de Orellana.

As in past editions, viewers who are not in Los Llanos de Aridane or cannot go to the Plaza de España, will be able to connect and enjoy the events online through streaming: facebook.com/hispanoamericanodeescritores.

The Hispano-American Writers Festival, managed by the Galdosian Order of La Palma, is especially promoted by the Government of the Canary Islands (through the ICDC), the Cabildo Insular de La Palma (through the Ministry of Tourism), and the City Council of Los Llanos de Aridane and its department of culture. Since its first edition, it has the support of the Cervantes Institute, the Fundación Universidad de Guadalajara, Mexico (foundation that manages the Guadalajara International Book Fair) and the Instituto de Astrofísica de Canarias.

These institutions are joined, in its IV edition, by the General Directorate of Books and Reading Promotion (of the Ministry of Culture of the Government of Spain), whose general director is María José Gálvez. With Mexico as the guest country, the festival also adds the institutional coverage of Amexcid, the Institute of Culture of Mexico and Foreign Relations of Mexico, and also ASALE, Association of Spanish Language Academies, joins the Hispano-American Festival of Writers for the first time . The new support for this fourth edition is completed by the influential magazine Granta in Spanish, based in Barcelona, ​​the historic Western Magazine together with the Ortega y Gasset-Gregorio Marañón Foundation, based in Madrid, and the Mexican communication company Conexion, based in Guadalajara, Mexico.