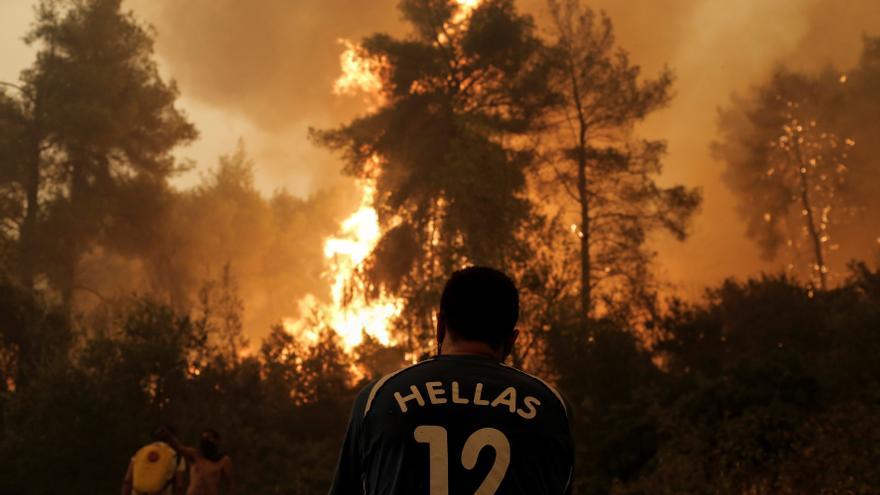 An intense heat wave forecast for five days has put much of Spain on alert for high temperatures and triggered the risk of forest fires in almost the entire peninsula. Turkey, Greece and Italy have been warning for days of the close relationship between extreme heat and the danger of devastating fires.

The State Meteorological Agency has launched a special warning for adverse phenomena: a heat wave from August 11 to 16. A wave assumes that the heat will be above statistically normal for at least three days in a row in the area under study. It is not the usual summer heat and it is not enough that it occurs for a few hours or at a very specific point.

This thermal surge, caused by the entry of African air added to the intense solar radiation in August, will reach almost the entire map except the Cantabrian strip and Galicia. The prediction says that it will start on Wednesday and will gradually increase to over 40ºC in "large areas of the south and center of the peninsula and the Ebro valley." The AEMET advises that 42-44ºC can be reached.

Although heat waves are recurrent in the Mediterranean climate and it is difficult to link a specific episode with the climate crisis, the trend observed by scientists is that, due to global warming, heat waves now occur more frequently, more intense, last longer and affect areas historically safe from these peaks.

The historical review that the AEMET carries out of the data recorded by its stations has found that, as the planet's temperature has risen, Spain has endured more heat waves: between 2010 and 2020 they were double that between 2000 and 2010. Summers, meteorologically speaking, last five weeks longer today than in 1980.

The UN scientists' climate report released this Monday pointed out precisely the increase in heat waves as one of the consequences (and at the same time a symptom) of the alteration of the climate system. An alteration that has caused the greenhouse effect caused by the emission of gases from human activities: basically, the burning of fossil fuels to obtain energy.

Prolonged spikes in heat have been the natural phenomenon that has cost the most lives in Europe, according to the recent advancement of the Atlas of Mortality and Economic Loss of the World Meteorological Organization. The wave that swept through Europe in 2003 caused tens of thousands of fatalities in Germany, Italy, France and Spain.

For now, what this August 2021 has made clear is the link between extreme heat and large forest fires. There is a "close relationship between meteorology and fire", defined by the analysis of the impacts and vulnerability of Spain to climate change prepared by the Ministry of Ecological Transition. The key factors, they explain, are temperature, air and fuel humidity, and wind speed.

The wave of almost uncontrollable fires in the eastern Mediterranean that began in Turkey and has been repeated in Greece, has progressed westward to force a state of alarm to be declared on the Italian island of Sicily. Rome and central Italy have activated the alerts this Tuesday for intense heat. In Greece, a week followed by fires has charred more than 65,000 hectares of trees, according to the National Observatory of Athens. In Turkey, 12 days of fires have been chained with 240 forest fires in 47 provinces that have caused eight deaths. In Sicily, they have registered 50 fires in the province of Palermo.

The Mediterranean basin is experiencing a combination of impacts from the climate crisis that range from increased droughts and arid terrain to increased extremes of heat, as explained the report on the scientific basis of climate change published by the IPCC On August 9. All this results in favorable meteorological conditions for large fires to jump, spread and grow. In fact, large forest fires, burning more than 500 hectares, are the main destroyers, as the cases of Greece and Turkey have shown. In 2019, in Spain, only 14 of the more than 10,700 registered accidents calcined 40% of the entire burned surface.

In this context, with the arrival of record heat in Spain, warnings for high forest fire danger have also had to be activated. Practically all the provinces of the peninsula are at high, very high or extreme risk except the Galician, Cantabrian and Basque coasts in the north. The Valencian in the east and the coastline that goes from Cádiz to Huelva. The entire interior of the peninsula oscillates between very high and extreme danger.

The risk maps are generated from the prediction data of the AEMET. What they indicate is that the "meteorological conditions for fire" converge, as the UN panel of experts, the IPCC, calls them. Spain arrives at this moment with a forest area devastated this year by forest fires situated in the middle of the decade: 40,000 hectares destroyed; the average is greatly affected by 2012 with many hectares burned at this time of year (more than 150,000) and 2018 with little charred land (11,000 Ha).

However, last month was, apparently, a truce of heat. July was a month with the global temperature 0.1ºC below the average for the period 1980-2010. The AEMET says that this is "slightly below normal" and qualifies it as a "cold month". But, at the same time, rainfall on the peninsula was very low: 58% of the usual. A "very dry" month that creates the conditions for the vegetation to dry out and become fuel for fires (in the Balearic and Canary Islands it rained more than normal).

With little water, the vegetation is list to become potential flames: "The dry air and high temperatures make the forest fuel dry quickly, favoring its ignition and activating its subsequent combustion", as described the General Directorate of Civil Protection. A dry month is now followed by a heat wave: an explosive combination.