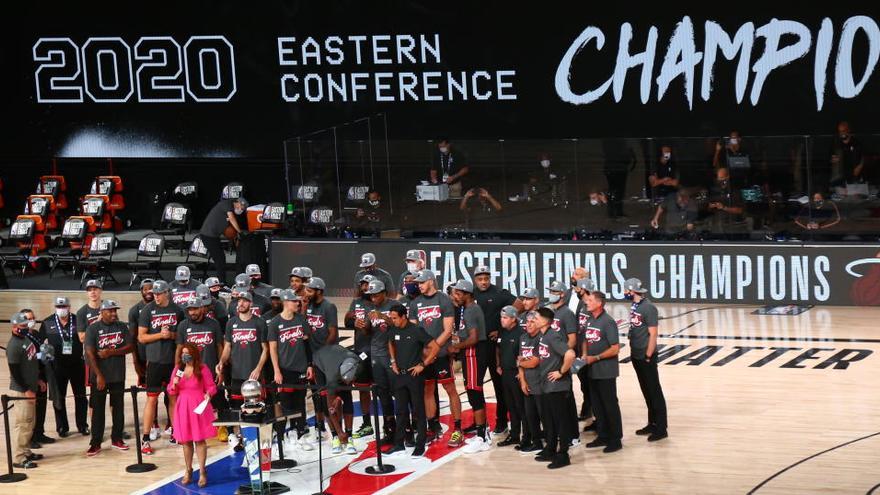 The great offensive work of pivot Bam Adebayo, who contributed a double-double of 32 points, 14 rebounds – the best record of the season – and five assists, was the key that allowed the Miami Heat to win this Sunday by 125-113 to the Boston Celtics in the sixth game of the Eastern Conference finals they won 4-2 to the best of seven.

The win secured the Heat a return to the NBA Finals for the first time since 2014 when they lost them to the San Antonio Spurs (1-4) and they will face the Los Angeles Lakers for the title, who last night were proclaimed champions of the Western Conference after eliminating the Denver Nuggets (4-1).

The Finals series, which will be the sixth in Heat history, and the thirty-second of the Lakers, will begin next Wednesday in the same scene of the Orlando bubble.

Along with Adebayo, the forward Jimmy Butler contributed 22 points and eight assists that also left him as a key player in the victory of the Heat, who had six players with double-digit numbers.

But it would be the reserves, rookie Tyler Herro, who contributed 19 points, and veteran Andre Iguodala, who reached 15 with an almost perfect performance – he missed a personal one – in everything he shot to the basket, they also became a winning factor for the Heat.

Iguodala finished 5 of 5 on field goals, including 4 of 4 triples, and matched 1 of 2 from the personnel line, in addition to capturing three rebounds, recovering two balls and giving a personal one, in 28 minutes that saw action, being the winning factor of the Heat.

The escort Jaylen Brown scored 26 points and forward Jayson Tatum had a career-high double-double of 24 and 11 assists, leading the Celtics.

While the escort Marcus Smart and point guard Kemba Walker each scored 20 points with the Celtics, who lost the Eastern Conference finals for the third time in the past four seasons.

Miami was down by six early in the quarter before regain control.

Boston took the lead twice more, with Adebayo answering both times, first with a mate, then with a three-point play and 6:16 minutes to go, which led him to hit the ground in celebration.

Adebayo’s action was like a premonition of what was going to happen the rest of the way, since the Heat never let the lead take away again.

Herro had a pair of baskets in another 9-0 streak that put the Heat up on the scoreboard by 10 points, Adebayo found Butler for a layup and a 116-102 partial lead that everyone on the Heat bench was on their feet.

The Miami team is the only NBA franchise with six Finals appearances in the last 15 years. They are looking for their fourth title, and this opportunity was not easy.

The Heat went on a 5-for-5 streak from outside the perimeter in the first quarter, but otherwise had problems again from beyond the arc in the first half.

Iguodala’s fourth triple, in the same number of attempts, with 4:20 minutes left in the third, put the Heat up eight points, before Brown scored five on Boston’s 10-2 streak that forced a tie.

Slovenian guard Goran Dragic, who finished with 13 points and seven assists, posted a layup from the lead in the miami last shot of the third period and it was 88-86 with 12 minutes to go.

The Celtics scored 10 of the first 12 points of the fourth quarter, surviving a scare there too when Brown suffered an ugly fall after scoring in transition.

Brown thought Butler touched him on the legs, no foul was called, and after Celtics medical staff checked his left knee, the star guard of the Boston team remained in the game.

But he could no longer prevent the Heat stay ahead of the scoreboard way to ensure the victory and the pass to the NBA Finals.