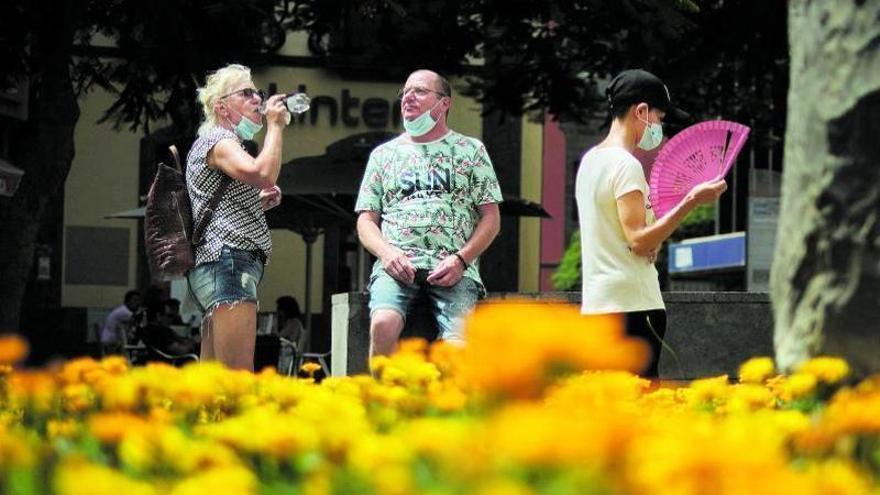 Despite being in a privileged position, what this figure highlights is that climate change has ceased to be a future threat in the Islands to become a tangible reality. This is demonstrated by a recent study published in the journal Nature Climate Change that has evaluated deaths caused by heat throughout the globe (732 places in 43 countries) in the last 27 years. The study, in which several Spanish researchers have participated, has concluded that between 1991 and 2018 37% of deaths in the world due to excess heat had the anthropogenic climate crisis as the main precursor.

The study compares, for the first time, what the heat mortality scenario was like in the past and what it is now, in order to assess how many of the current deaths may be due to the progressive increase in temperatures. The conclusions suggest that the populations of middle and lower countries are going to be the most affected in percentage terms by this increase in deaths attributable to heat, also coinciding with those countries that have had less responsibility for advancing climate change, such as case of those of Latin America.

The fact that in Spain, and specifically in the Canary Islands, this percentage does not grow so much in relation to the rest of the world, does not mean that it holds a better position. Our country is one of the regions of the planet with the most deaths due to high temperatures in general, like most of the countries that are in the Mediterranean basin. And precisely the latter, "is going to be the area most affected by global warming", as claimed by the physical geographer of the University of Santiago de Compostela, Dominic Royé, one of the signatories of this article.

The Archipelago has a more favorable situation. The rate stands at 1.8 deaths per 100,000 inhabitants - the country's average is 4.7. In percentage terms, the impact is suffered by the province of Las Palmas de Gran Canaria, whose mortality rate rises to 22.5% due to climate change. In absolute terms, the Canary Islands have regretted eleven deaths for this reason. The lower impact of temperature on mortality may be related to the fact that the global thermal increase is more intense in the interior of the continents than on the coast. As the geographer of the University of La Laguna (ULL), Abel López, who has not participated in this article, points out, "oceanic surfaces are a temperature regulating factor", and this can lead to a "greater thermal softness" than allow you to avoid the extremes so important that you do live inside. In any case, as Royé remarks, "with or without global warming, Spain is already characterized by a high fraction of deaths attributable to heat." In fact, for this reason, many of the autonomous communities have specific public health plans to deal with recurrent

heat waves that occur in the Peninsula and the islands.

For its part, the Ministry of Health has the Preventive Action Plan for the Effects of Excessive Temperatures on Health. Through this program, the General Directorate of Public Health provides information on social networks and the media from June 1 to September 15, with useful advice and practical measures to prevent the effects of exposure to high temperatures. In absolute terms, the number of heat deaths related to climate change in Spain amounts to 704 per year, which is 4.7 per 100,000 inhabitants on average, taking into account the data collected in the provincial capitals. An "obvious" increase in mortality was found on all continents, although they vary geographically.

Given these findings, researchers have supported the urgent need to establish more ambitious mitigation and adaptation strategies to minimize the impacts of climate change on public health. "Climate change is affecting our health," insists Royé, who points out that it is time to take these measures, especially in cities where, due to the increased use of artificial surfaces (such as concrete or asphalt), the increase will be more of temperatures. "We must rethink how we live in cities," insists the researcher, who points out that it is time to carry out a "climatic restructuring" of them.

In this sense, their proposals go through the creation of more green areas –vegetation, such as parks– and blue areas –such as rivers and lakes–, as well as rethinking the constructions so that they are all bioclimatic. This means that care must be taken to ensure that buildings can maintain an ideal temperature without continuing to emit greenhouse gases. "It is known that the outside temperature can increase between two or three degrees Celsius just by the use of air conditioning," says Royé, who also emphasizes that humans will not be the only ones affected by the rise in temperatures. "Other living beings also suffer from heat waves and this can harm livestock and agriculture," he insists.

This is happening when the whole planet is about to exceed the temperature increase that the Paris Agreement had promised not to exceed before 2050. Worldwide temperatures have already risen 1.03 degrees Celsius above the pre-industrial level. . In addition, as Royé points out, in countries like Spain, the degree and a half increase in average temperature was exceeded long ago. And it is that Europe is taking the worst part, having increased its temperature between 1.7 and 1.9 degrees Celsius. "Think what could happen if emissions continue and we reach 2 degrees Celsius increase or even more," Royé says, warning that the scenario has all the ballots to happen if global emissions are not immediately cut in the bud.