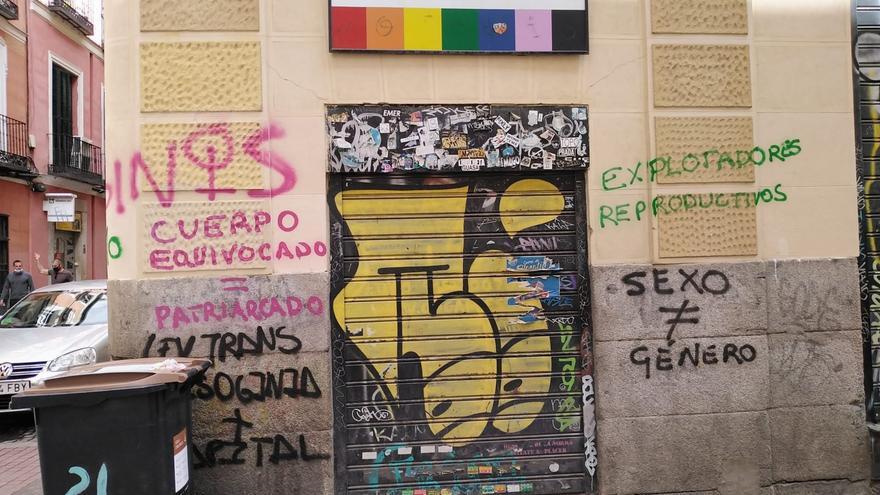 The Lesbian, Gay, Transsexual and Bisexual Collective (COGAM), a Spanish NGO that has been working for equality for more than 25 years, has denounced through its personal Twitter account the vandalization of its facade against diversity and specifically against Trans Law with graffiti like “Queer is misogyny”, “my oppression is not your identity” or “wrong body = patriarchy”.

“Unfortunately we are used to it. Last year the same thing happened to us during Pride, when it was virtual and we could not celebrate it,” Carmen García de Merlo, president of COGAM, tells elDiario.es. He regrets that paintings like these exist, since “what we should have is tolerance, something that is independent of the political ideas of each one. There are people who accept the rules of coexistence and others who try to impose their own at all costs.”

Along the same lines, the COGAM tweeted from a Twitter profile that “those who have no arguments or reason use vandalism and violence. It will not stop us from our goal, which is equality in diversity, who want a tight society and to their measure Today, more than ever, mutual support, solidarity and activism. ”

The association’s spokeswoman recalls other occasions in which they also suffered graffiti of insults or swastikas on the two streets that border the premises, something they “do intentionally to appear in the media.” “We will continue forward, what are we going to do. It does not suit you that they insult you and less that they pass to locals or people. This is a lit fuse that is there, which is intolerance,” he laments.

From the Trans Platform Federation, they also denounce the graffiti of the COGAM headquarters as well as other attacks on the LGTBI collective in different parts of the Spanish State such as Huelva, where insulting graffiti was made towards trans people on a bench that was decorated with the colors of the trans flag; or in Ripollet (Catalunyaa), where for the third time graffiti has been perpetrated against the mural that the Ripollet City Council has made on historical dates and events of the LGTBI collective.

García de Merlo says that they have already contacted the Madrid Municipal Police for the City Council cleaning staff to come, although he regrets that these “are things that are repeated, regardless of who signs it or who does it.” The president gives as an example the recent demonstration on Trans Visibility Day in which a group of people approached to rebuke and insult the group. “Fags, degenerates,” they shouted to those present as the protesters expelled them from the square shouting “Nazis out.”

“On the anniversary of Pedro Zerolo it was said that we have to fight for rights and to maintain those that we already have. And that is what we have to do. We will open on Monday as always,” claims Carmen García.