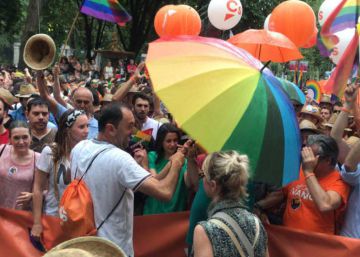 The president of Diversitat, the LGTBI association that organizes the Pride in Alicante, claims to have received anonymous threats by telephone after announcing the veto for Citizens to present themselves as a party in the demonstration on the 20th, because of their pacts with Vox . The leader of Diversitat, Toño Abad, maintains that as an organizing entity can not be responsible for the safety of the orange training representatives in the event that the attendees decide to "make a escrache or demonstrate" against their participation in the march , as happened last Saturday in Madrid.

Diversitat announced on Thursday that halfway through this protest demonstration, will perform "a macrosentada as a sign of the rejection of the retrograde pact of the three rights." With this, they intend to protest against "the autonomic pacts in which the total or partial derogation of the laws that collect the rights of the LGTBI collective are negotiated," explains Abad. For this reason, they maintain that they do not understand the presence of Citizens, unless they "demonstrate against the policy of their party to agree with Vox," says Abad. The PP is not invited either. However, they have already announced their presence Podemos, Compromís, PSOE, IU and Pacma, according to Abad.

This decision raised the protests of the representatives of Citizens in the municipal government, mainly the deputy mayor and councilor of the LGTBI area, Mari Carmen Sánchez, and the mayor of Urbanism, Adrián Santos, who on Twitter said he came "out of the closet years ago" and he's "very proud to be gay." Both insisted that they will go to the Pride and that they will continue defending the collective's freedom.

However, this activity in social networks of "public positions of citizens" is the one that, in the opinion of Abad, has led to the flood of threats received. "They have pointed me out," he says, "and you can not put those who defend the rights of other people in the shootout or in the eye of the hurricane." Since Thursday, the president of Diversitat has received anonymous calls to his personal telephone number. "They have told me since 'mariconazo, we are going to kill you', until 'we know where you live', he denounces," and they have also made allusions to my niece, who lives with me ".

Abad went to the police station on Thursday to advise on the most effective way to report the threats. "The lawyer of the Valencian Observatory against LGTBIfobia", entity dependent on Diversitat, "is assessing at this time if it is reported to the Public Prosecutor's Office, the police or the courts," said Abad, who anticipates that next Monday he will file the consider relevant.

From Ciudadanos, Sanchez has "condemned all threats and coercion, against us or against others," has indicated that his party is pleased that Abbot is going to denounce, and adds that his colleague Adrián Santos "has also suffered threats and also the we will denounce. "

Act of the Popular Party

But the Pride organization dispute does not focus exclusively on Citizens. Diversitat has also moved away from the municipal events organized by the PP, which next Monday will display the rainbow flag in the City Hall. "Neither recognize this act nor go," advances Abad. The reason is always the same. The agreements reached by the PP with Vox. And, furthermore, according to Abad, the Consistory presided by the popular Luis Barcala has not summoned them. "We do not know with what purpose," says Abad, "but we do not like it."

Thus, the organizers of the Pride in Alicante have accepted the invitation of the Government Subdelegation and hoist the flag of the collective this Friday at the government headquarters of the Plaza de la Montanyeta. It is the event that opens the week of vindication of the Pride in Alicante. Along with the sub-delegate, Araceli Poblador, councilors have appeared from all the parties with representation in the Town Hall, including Citizens, except PP and Vox. "All people are invited to participate in the Pride. But not all entities or brands "that" agree with the extreme right while carrying the LGTBI flag on the other hand, "said a representative of Diversitat.