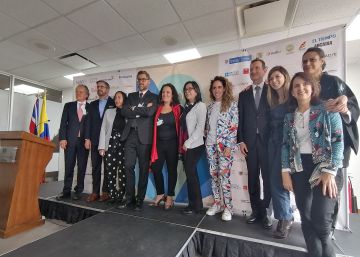 He There is Cartagena Festival de Indias, one of its most prominent venues since it opened more than 30 years ago in Wales, celebrates 15 years turned into a diverse meeting of dialogues and thought. From January 30 to February 2, the walled city of the Colombian Caribbean will once again be the scene of conversations to imagine the world from literature, the arts, journalism or the economy.

The Canadian Margaret Atwood, eternal candidate for the Nobel Prize for literature and world famous for The maid's tale, his dystopian fiction adapted to television, stands out among the 140 guests in this edition of the Colombian version, where it will present its sequel The wills. The Uruguayan poet Ida Vitale, awarded in 2018 with the Cervantes PrizeHe will share the stage with the Portuguese Ana Luísa Amaral as part of the literary poster, which will also feature the Spanish Javier Cercas – the most recent winner of the Planeta Prize with Terra Alta – the Cuban Leonardo Padura and the Mexican Valeria Luiselli, winner of the American Book Award for The missing child. Among many other local authors will be Melba Escobar, Margarita García Robayo and Juan Gabriel Vásquez.

EL PAÍS América, partner of the Hay Festival in Latin America, will again have a space in Cartagena de Indias. Its director, Javier Moreno, will talk with a special guest who will meet in the coming days. The Spanish filmmaker Fernando Trueba, which has already finished filming in Colombia The forgetfulness we will beHe will speak with the writer from Antioquia, Héctor Abad Faciolince, about the adaptation of his most famous book. The Madrid winner of the Oscar for best non-English speaking film for Belle ÉpoqueHe will also discuss his extensive work with Francesco Manetto, correspondent for EL PAÍS in the Andean Region. In that audiovisual spectrum, Javier Gómez, script coordinator of The paper house, will talk about the successful series with Javier Lafuente, correspondent and delegate of this newspaper in Mexico, Central America and the Caribbean.

The agenda includes all kinds of thinkers, scientists, politicians, economists or musicians. “The country and the world has changed, and these changes have been reflected in the program. The festival began very literary and gradually became this great festival of ideas that reflects the situation in which we live, ”says Cristina Fuentes de la Roche, international director of the event. In a call to listen to us from different fields, he defines the festival as “a space for the diversity of thoughts”.

In other spaces, the Venezuelan Moisés Naim, columnist of this newspaper, will interview two Nobel Prizes in Economics and Peace. With the American Joseph Stiglitz will discuss how to rethink the capitalist model to avoid abuses of the system itself, while with the former Colombian president Juan Manuel Santos It will address the challenges of Latin America in this turbulent moment.

Environmental and scientific issues will be addressed by Colombian-Canadian anthropologist Wade Davis, author of The river, and the American David Wallace-Wellswho will present The inhospitable planet: life after warming. In the country with the greatest diversity in birds in the world, compatriot Jennifer Ackerman will talk about The ingenuity of the birds, his research on the intelligence of these animals.

Music will be another of the multiple axes, with different genres represented with the presence of artists such as the Colombian J. Balvin or the Spanish Santiago Auserón, also known as Juan Perro, who will chat with the Colombian writer Juan Cárdenas. Another writer, Leonardo Padura, will present his book The faces of the sauce, while the llanera music will close the festival with Walter Silva, who will talk with the journalist Daniel Samper Pizano. As Cristina Fuentes states, "it is a festival designed for curious people."