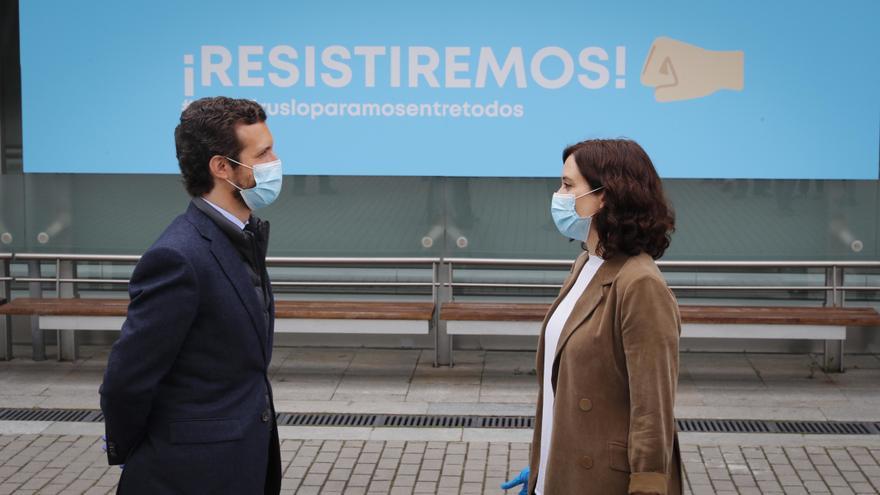 "Ayuso is Sánchez's great enemy and, therefore, to put obstacles to Ayuso is to help Sánchez." The phrase is not anyone's. It belongs to Esperanza Aguirre, who led the Madrid PP from 2004 to 2016, when he had to resign from his penultimate redoubt of power besieged by corruption who starred, and still star today, their most loyal collaborators both in the autonomous government and at an organic level. Aguirre thus stands next to the regional president in the open fight between the state leadership of Pablo Casado and Isabel Díaz Ayuso for party control in the region. A battle that, although it reproduces old schemes, surprises with its virulence. The former regional president has accused the leaders of the noble plants of Genoa as "little children" and "chiquilicuatres." number two de Casado has not been long in coming: "What destroyed the PP in Madrid was corruption".

The hard sector of the PP, which is based on names such as Aguirre herself, Cayetana Álvarez de Toledo or former president José María Aznar, was the one that raised Casado to the leadership of the party. The speech with which he ascended to the Presidency was applauded by the old guard of the Aznarism, while the leaders who have cultivated a more moderate message distanced themselves and took refuge in their baronies, protected by the Galaico-Portugués and Sierra Morena massif.

Casado lost the primaries against Soraya Sáenz de Santamaría. But at the congress, the delegates of María Dolores de Cospedal - who was a Madrid councilor with Aguirre - turned the result around. "The PP has returned"said the brand new president of the PP then. But two years later, in the middle of the worst pandemic the world has experienced in a century, Casado chose to modulate his message. Very little, according to their political rivals, that they see a PP installed in the not to everything and what do you see in the polls proof that the path is correct and inevitably leads to Moncloa. Too much, in the words of those who one day saw their heir in that young man who protected the José María Aznar's business with Gaddafi's Libya as commission agent of Abengoa.

"Married, in the summer of 2020, he decides to make a strategic change to try to get the votes of Ciudadanos," Aguirre said in a Interview with The world this Monday. The leader of the PP rehearsed in October of that year a kind of turn to the center that would help him get rid of Vox. Before, he dismissed Cayetana Álvarez de Toledo as parliamentary spokesperson, which was taken as a declaration of intent from the most extreme positions of the party, related to Aznar's FAES.

"He stopped giving ideological battles," Aguirre complains. And who has not stopped giving them? Ayuso, whom Aznar himself - whose figure has never stopped flying over the party headquarters even now that it is for sale - placed before the summer at the same level as Casado himself. "Isabel is one of the people, like Pablo Casado, with all the conditions for a brilliant leadership," he said last June. And he added, with a quite evident but not explicit message: "It does what it has to do. (...) When I was president of Castilla y León, I did it. And from there a national alternative was born".

Ayuso's victory in the May elections, in which, however, he did not revalidate the classic absolute majorities enjoyed by Aguirre and Alberto Ruiz Gallardón, put the state leadership of the PP on alert. Those of Casado were counting on the Madrid president to take control of the party. In fact, the secretary general, Teodoro García Egea, said that he would vote for her if she was a member of Madrid. But they did not expect it to become a counterpower. Nor that he launched his candidacy months before the deadline, overshadowing the October political convention with which Casado wants to relaunch his party before the electoral cycle that is already looming on the horizon. A crucial conclave for the Genoa leadership, which is focused on its organization, and to which Ayuso has said that he may not attend because he has a planned trip to the United States.

This Madrid fight is something that the party has already experienced in the past, with Aguirre herself embittering life from the first floor of Genoa to Mariano Rajoy who sat on top of the building. And then there was no threat from Vox. In fact, Casado continues to try to distance himself from Santiago Abascal whenever he can. The last time, last week during a conference before the main values ​​of the PP, including Ayuso herself and who has emerged as her potential rival, the mayor of Madrid, José Luis Martínez Almeida. There he said that his intention is to govern alone even if he does not have the majority by himself, as Rajoy did in 2016.

The state leadership of Casado has recovered an old idea for the PP in Madrid: launching a powerful candidacy, although perhaps without options, such as that of Martínez Almeida. The intention is that Ayuso agrees to negotiate and does not monopolize all the organic power for her. A consensus list, as assured this Monday The reason, that divides the three headquarters of the region: municipal, autonomous and internal. This would be for Ana Camins, current secretary general of the management company chaired by Pío García Escudero since the courts took ahead, in different phases, to the postaguirrismo.

Ayuso, whose chief of staff is the former spokesman of the first Aznar government, Miguel Ángel Rodríguez, has incorporated some heavyweights from the Aznarism, directly from the party's foundation laboratory, FAES. This is the case of Alfredo Timermans, current Deputy Minister of Employment. Before he was head of the Cabinet of Álvarez de Toledo when this commanded the parliamentary group of the PP.

The voice exporter has become one of the voices habitually discordant with Pablo Casado since his dismissal. In February of this year he pointed directly to the president of his party for the debacle in the elections in Catalonia. His speech then is almost traced to that of Aguirre now. Therefore, this Monday he tweeted a message to second Aguirre's words and thus place himself on the side of Ayuso in the long and hard struggle that is coming, since it is not planned that the PP congresses in the uniprovincial autonomies will be held until the first semester of 2022.

This decision, taken by the party's national Board of Directors last July, was ratified this Monday by the Secretary General, Teodoro García Egea, in light of Ayuso's claims to celebrate Madrid. Aguirre's interview had its reply with another of the regional president herself in Il Corriere della sera, owned by the same group as The world. In the talk, Ayuso claimed control of the PP in Madrid to revalidate "Aguirre's successes." AND asked to be "soon".

It won't be, unless things change a lot. And Aguirre's movement has not liked anything in Genoa. The number two de Casado appeared at the press conference after the Steering Committee meeting. He answered less than half a dozen questions, all referring to the PP in Madrid and the words of Esperanza Aguirre, which were well addressed to him or to his collaborators. "I agree with Aguirre that what destroyed the PP in Madrid was corruption and it is something that we are never going to allow, "snapped García Egea.

A depth charge against the former president, not so far from Casado until recently, who also has to deal with the umpteenth scandal that shakes him: the allegedly irregular sale of a Goya painting to pay off a debt. And a warning that in Genoa they are ready to fight.