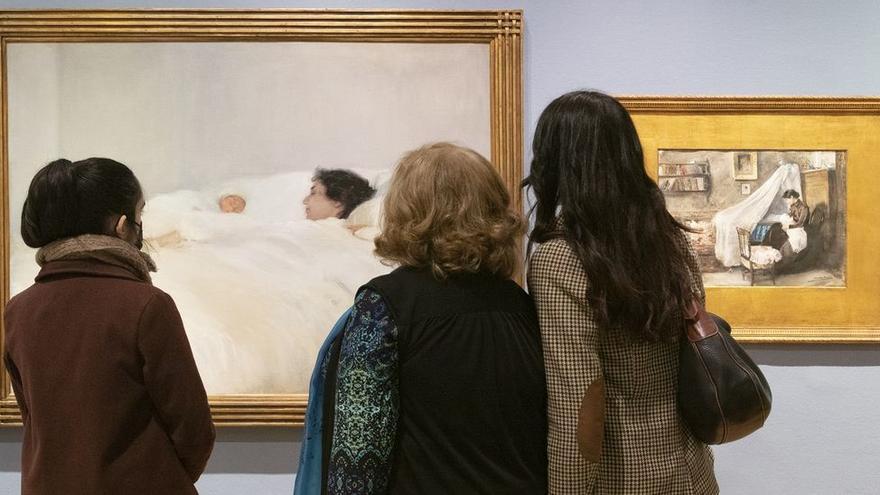 The Sorolla Museum has inaugurated the exhibition 'The happy age. childhood in painting Sorolla'an exhibition that brings together a selection of pieces to bring the public closer to the representation of childhood in the work of the Valencian painter, a theme that accompanied him throughout his career. It is composed of 41 canvases and 3 drawings from the Madrid museum itself and from the foundation, but also from institutions and private collections. Some of the pieces are on public display for the first time since the early 20th century.

Sorolla painted numerous works in which the smallest became the main motif. are their maternity hospitals, family scenes, numerous child portraits, paintings where children represent the 'joy of water' and they are also paintings in which the teacher approaches other types of childhoods, less fortunate, harder, marked by child labor or illness.

The exhibition is divided into three sections. The first is the center of the family. Orphaned at the age of two, Sorolla found in the family created together with his wife Clotilde García del Castillo, the firm pillar on which to sustain his life as a man and as a painter and an inexhaustible source of inspiration. With the birth of his three children, María Clotilde, Joaquín and Elena, scenes of a new intimacy appear in his painting. They are works like 'The first son' or 'Mother' where the author reflects the new concept of motherhood that has been prevailing throughout the nineteenth centurythat of the devoted mother who raises her children.

They will also be a source of inspiration for his father who will portray them on numerous occasions, paintings where the familiarity with the model and the freedom granted by painting for oneself will lead Sorolla to make his best portraits of children.

The exhibition also brings together, for the first time, a selection of commissioned child portraitmostly from private collections, where we can see how, although Sorolla sometimes has to bend to the taste of the clients, the naturalism and quality with which he captures the childish features position him as the great portraitist that he was.

The second part of the exhibition is dedicated to the world of children. This time to train and educate oneself, to learn sitting at a desk and enjoying the little boats and dolls, was captured by Sorolla's brushes in optimistic and cheerful paintings that show little ones applied in their lessons, with their favorite toys and enjoying the water. The paintings that gave him the most fame are those starring healthy and happy children enjoying the sea, paintings such as 'Bath time', in which the light bounces off the huge white fabrics and shines on the waves. Running on the beach, lounging on the sand, or climbing the rocks, these little ones represent a return to lost Arcadia, celebrating the fleeting years of childhood.

The third part of the exhibition is dedicated to the other childhood We also find as protagonists of the paintings children of humbler social classes that must work to help support their families. Although he does not use the little ones to personify his censorship of the inequalities of the society in which he lives, the painter alludes to them in paintings such as 'La almosna'.

On the other hand, Sorolla uses his favorite subject –the sea– to represent illness in childhood, as we can see in 'Study for ¡Sad inheritance!'. The joyous motherhood that goes hand in hand with the joy of the arrival of the children has a flip side, which is their loss, as can be seen in 'Head of a child in bed', which is exhibited for the first time in This time.