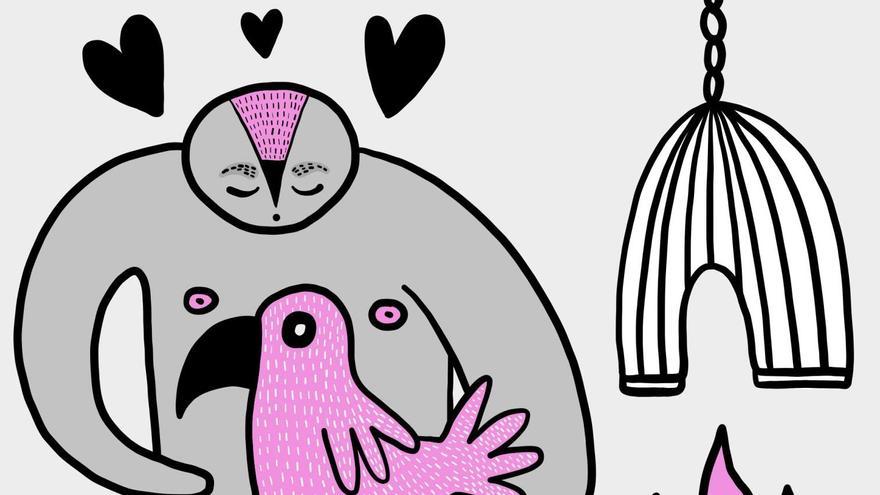 Delphine de Vigan writes in Based on real events that “true creative impulses are preceded by a kind of darkness.” I try to believe that writing It is any trade, which is about putting one word after another with a little grace and without much more mystery. I guess it’s a strategy to not feel so pressured at the keyboard. Here we have come to tell stories, period. In any case, if creativity has to do with darkness, I understand that there are places that are more prone to creation than others. Prison is one of them and, in a brief look at de Vigan’s work, we can also sense that the family is another of those dark places of creation.

Maybe that’s why Run away man run away, by Xoxé Tarrio is one of the hardest and most revealing books I have ever read. He reminded us in the epilogue of his work that to be able to write that diary it had been necessary to suffer, pain and many deaths. He insisted on recalling that “all the people incarcerated in prison have already been tried in one way or another” and asked his readers not to pass a new trial against the prisoners but against ourselves: “Is this system desirable or Do you have to change it and try a better one? You are directly responsible for everything you pay and support with your taxes, and it’s up to you to decide what things are done with them. ” Tarrio aimed at the heart. Writing, somehow, alleviated the darkness in which he lived all the years he was imprisoned, but literature did not save him from death. Of course, today, for all of us who believe in other possible worlds, his work is a beacon. Prison is the place where we hide our miseries as a society, but Mario Benedetti already said it: “Everything sinks into the fog of oblivion, but when the fog clears, oblivion is full of memory.”

Despite the cruelty of the prison system, the difficulties faced by the prison population and the social and institutional neglect to which we condemn all those who fail in the patriarchal and capitalist project, resistance is also allowed to appear in the prisons. From the women’s prison in Picassent (Valencia) it will begin to distribute for the first time the magazine in which the prisoners are working. Pilar Almenar, journalist and director of the project, has assured in a press release that “it is necessary to encourage society to be permeable to reintegration. For this, it is important that citizens know who and how the women inmates in prisons are: their talents, their desires and the efforts they make to reintegrate themselves. In this way, we will build a society that welcomes and supports them when they leave prison. Not bad while, Angela Davis would add, we develop other forms of justice that promote a more empathetic society and away from neoliberalism, a system in which prisons and the police generate the profit it needs to sustain itself. “This requires us to develop strategies to understand the economy, police control and prisons, racism or capitalism within the same framework,” said Davis on his last visit to Bilbao five years ago.

It is not the first issue to be written by the Picassent dams. The magazine is called Express and it has been created entirely by the women inmates in the penitentiary. “They have decided on the issues to address, the focus on their writing, the graphic material that accompanies the texts and the design of the publication itself,” they say in the text that accompanies the campaign of crowdfunding that they just launched to get the first issue they want to distribute outside of prison. This latest issue of the magazine was finished during the confinement. The inmates sent their texts as handwritten letters. Remember that in prison there are no computers, no mobile phones, and no internet access. The pandemic has served as an excuse to further limit the communications of prisoners with the outside world. So, Noelia Acedo, president of the association Families Facing Prison Cruelty, said to Pikara Magazine that from their group they hoped that society would take some conscience: “Prison is not a hotel where prisoners live better than anyone else. The confinement that we are experiencing now is nothing compared to what they live in prison. Those who are in First grade can spend 22 or 23 hours in a room with nothing and a while alone in the yard. First grade is torture, jail within jail. ”

Writing is probably not, at least in the case of the Picassent dams, an exercise that is limited to putting one word after another. Words, written and read, may shed some light on your lack of freedom. In any case, outside we look forward to listening to your demands, reading your wishes and knowing your proposals. It is likely that many of your dreams serve to improve that freedom that we all lack.

The third wave leaves extreme incidents in large cities after an uncontrolled increase in infections: consult your municipality