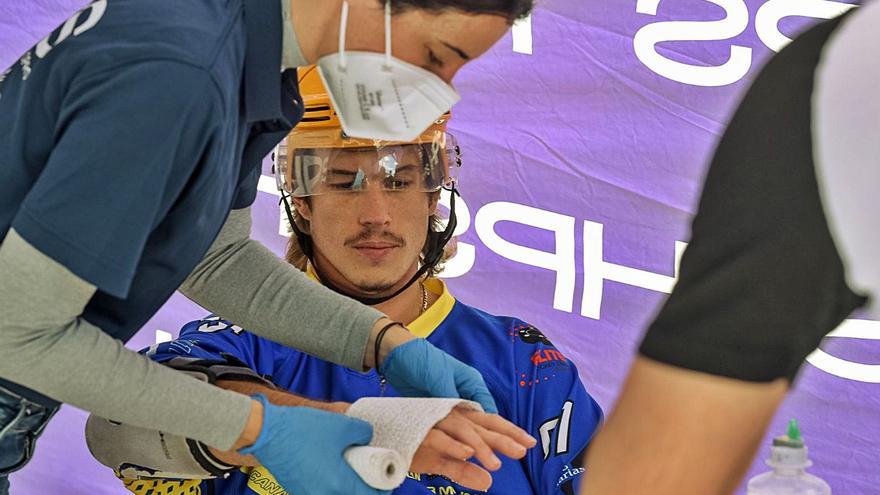 The reissue of the CH Molina Sport cup cup title last weekend, the second in its history, has countless protagonists. From the saving stops of the Czech Adam Schejbal, to the three miraculous scores of Jacob Tenemyr, with which to send the game from the final to extra time and finish it with a golden goal in extra time. But if there is a true hero throughout the championship held in Gran Canaria, that is the North American striker of the island team, Chuck Baldwin.

Universal Soldier. Cid Campeador. The Franz Beckenbauer of the stick. Any nickname falls short of Baldwin’s feat this past weekend. The love he feels for colors, the desire for revenge against his former team, Espanya HC, and the desire to bite the bullet with the pain he must have felt in his left arm when his radio was broken.

The Californian player had been recovering from his injury for a month. He watched the calendar pages go by while the cup date stalked the date set for the last week of January and Baldwin was not going to miss the opportunity to add a new title to his record with the team that brought him to Spain in the 2016-17 season. after having abandoned ice hockey and switched to inline skating.

This striker of the goals, with the vitola of being the top scorer in the last two leagues with Espanya – 58 goals and 16 assists in 2018-19; and 32 goals and 9 assists in 2019-20–, he wanted to beat the Mallorcan team at all costs. Vendetta for Baldwin after his second stage in the ranks of Molina Sport.

And thus he was able to achieve his particular objective during the dispute of the Copa del Rey. The American did not hesitate to get rid of the plaster that was protecting the area of ​​his injured arm despite the fact that the club’s medical services advised him against carrying out this decision.

Obviously, the sports regulations of online hockey do not allow having an element of the solidity of a plaster for the dispute of the matches, so after getting rid of it, the doctors had to apply a bulky bandage on his arm so that, as as he promised, he was only limited to defensive actions. Curious promise in a sport in which you are constantly in contact with your rivals.

Baldwin was thinking at home that he could not leave his team stranded on such an important date, even with the loss of his teammate Pawel Zasadny due to a penalty. The man in charge of lifting the first Molina cup, the captain who raised the trophy to heaven in Valladolid in February last year and who was not going to be able to be present at García San Román. The morale of the yellow team needed a plus of confidence and that was going to be in charge of Santee.

He put on his helmet and skates to jump onto the track in the semifinal that faced the Gran Canaria team against Caja Rural de Valladolid. Nobody knew about the injury of the forward, everyone present would think that he had already recovered from his injury given the secrecy with which he has been carried to date. The player’s performance against the Castilian-Leon team was sublime and he scored the second goal of the win that Molina signed 5-1.

And the great day has arrived

Last Sunday, the nerves among the members of the insular squad were latent due to the pressure of having to defend the title and also in the edition that was held at home. Nobody wanted a Sanromanazo. Much less Baldwin, who was playing his professional career in the event that a bad blow could aggravate the already dangerous injury he suffers in his arm and from which he still has to recover to be 100% on the slopes.

As if that were not enough, all that was at stake, the emotion that the final implied was no wonder. Molina had to overcome an adverse score of 2-4 with 6 minutes remaining in the game and there the North American appeared to associate wonderfully with the tournament’s MVP, Jacob Tenemyr.

30 seconds from the end they emulated the play of the first insular goal and took the desired 4-4 to the scoreboard to go to extra time. Two assists of carats for a title that was in charge of certifying the most valuable of the tournament with a golden goal in overtime and thus raising to a historic feat of sport the feat not only of Molina of turning the scoreboard in six minutes, but to certify Baldwin’s heroism with the stick.