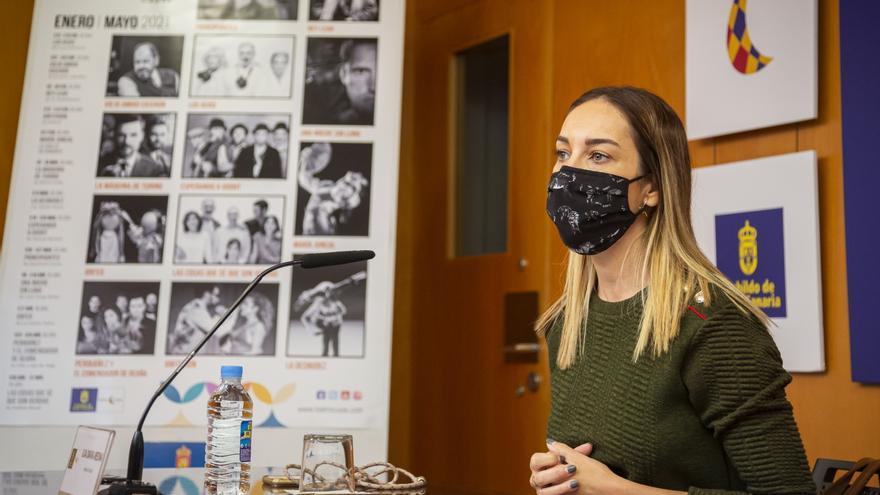 The Minister of Culture of the Cabildo de Gran Canaria, Guacimara Medina, and the artistic director of the Cuyás Theater, Gonzalo Ubani, have presented "the best vaccine" of this scenic venue against the Covid-19 pandemic: a new and great program that will include thirteen shows between the months of January and May, with leading figures from theater and dance .

The new proposal will start on January 15 and 16 with one of the actresses of the moment, Elena Irureta, from the series 'Patria', who will star in the Cuyás 'Los Niños' alongside Susi Sánchez and Joaquín Climent. Directed by David Serrano from a text by Lucy Kirkwood, the play, which delves into responsibility towards future generations, takes place in the near future.

Since the disaster at a nearby nuclear plant, two retired scientists, Hazel and Robin, have been living in a "little cabin on the east coast", trying to lead a life of apparent normality despite the fact that electricity is rationed and they own a meter. to measure any sign of radiation. Suddenly, Rose, a physical colleague they haven't seen in 38 years, shows up, forcing them to reflect on the impact of their lives on generations to come.

'The children' was programmed months ago by the Cabildo campus, but could not be exhibited due to the pandemic. The same happened with 'Viejo amigo Cicerón', which, now, will be exhibited on January 22 and 23, with Josep María Pou as the protagonist.

The piece, which was premiered at the 65th International Classical Theater Festival of Mérida, is written by Ernesto Caballero and directed by Mario Gas and raises hot topics with no other pretense than to provoke, from a contemporary aesthetic, a civic debate to starting from the teachings of the famous Roman orator, who personifies the moral integrity of one who maintains the coherence of his political convictions even in the most adverse circumstances.

Atalaya also returns to Cuyás with 'King Lear', by William Shakespeare. His second Shakespearean montage after 'Richard III' is "a universal text in which time and space" because "human passions and instincts have not changed in the last 4,000 years." "Our version chooses to promote the search for the naked human condition that underlies the text, stripping the individual of everything superfluous, connecting with the essence of the essence of Nature and seeking empathy towards the rest of Humanity", they affirm from the company directed by Ricardo Iniesta, which will perform in Gran Canaria on February 5 and 6.

February (days 12 and 13) will also be the month of 'Host', a version by Juan Carlos Rubio of Moliére's adaptation of Plauto's funny text with Pepón Nieto, Toni Acosta, Fele Martínez or Pepe Tous, and of the dance of María Juncal, who presents 'Life is a romance' (single show on the 27th).

In March they will arrive 'The Turing Machine', 'Nudity', 'Waiting for Godot' and 'Beginners: What we talk about when we talk about love'. In the first one, a montage about Allan Turing, the scientist who deciphered the Enigma code, with which the Nazis encrypted his messages during World War II, and who ended up committing suicide after being convicted of his homosexuality, Claudio Tolcachir directs David Grao (who triumphs in the 'Bit' series) and Carlos Serrano, who will rise to the Cuyás tables on March 5 and 6.

For its part, 'Nudity', which won three Max awards in 2018 (Best Dance Show, Best Male Dance Performer and Best Choreography), will arrive on the 13th.

The work is directed, choreographed and performed by Daniel Abreu from Tenerife (2014 National Award) and has the participation of the 2019 National Award, the Gran Canaria Dácil González.

'Nudity' is a poetic proposal about knowing how to love yourself. On stage, two figures pointing out an idea of ​​polarity and a journey from death to love, accompanied by music (the musician, the low sound of the wind on the metal ...). "Nudity is an act of death, like exhalation, taking everything out so that something new begins and at the same time nudity is building with the illusion that this was the definitive thing," explain those responsible, for whom "nudity responds to that place of intimacy, where questions no longer exist. "

In 'Waiting for Godot' (March 19 and 20), Pepe Viyuela plays Estragrón, who waits for Godot on a road with Didí (Alberto Jiménez). There, next to a tree, they spend their time talking, until they are interrupted by Pozzo (Fernando Albizu), a cruel man who claims to be the owner of the land where they are and who has his servant Lucky (Juan Diaz). After the departure of the latter, a boy (Jesús Lavi) arrives with a message from Godot: "He will not come today, but tomorrow afternoon" ... Strength, humor, poetry, tenderness, pain, laughter ... There are some of the features of this work by Samuel Beckett, according to its director, Antonio Simón.

And Andrés Lima directs Javier Gutiérrez and Vicky Luengo ('Antidisturbios') in 'Principiantes', a montage in which Juan Cavestany adapts a text by Raymond Carver, a work scheduled for the Cuyás on March 26 and 27 that revolves around to love and four characters, a veteran married couple and a couple of young friends, who talk in a kitchen.

From the afternoon in which that work takes place to 'Una noche sin luna', by Juan Diego Botto, who once again puts himself at the command of Sergio Peris-Mencheta in a moving and surprising piece about Lorca, from the sensibility of the XXI century and that approaches little known aspects of his life and his work through interviews, talks, conferences, fragments of his works and his poems. It will be on April 9 and 10.

The familiar 'Orpheus', from La Canica Teatro, can be seen on April 17 after a series of school functions sponsored by the Mapfre Guanarteme Foundation. November Theater also returns in April (days 23 and 24), with Lope de Vega's classic 'Peribáñez y el Comendador de Ocaña', adapted by Yolanda Pallín and directed by Eduardo Vasco, and this great program will close (April 30 and May 1) 'The things that I know are true', with Verónica Forqué.

In a house in the suburbs, with a small garden, a middle-class family faces the passing of a decisive year. With the metaphor of the four seasons, which encapsulates the growth and change of the four siblings and their ties with their parents, the audience of 'The things that I know are true' assists the development of an organism that mutates, is agitated and it dies, to continue, always, irrepressible, unstoppable, breathing and transforming, like a small organism preserved in amber.

To guarantee the health and safety of all, Cuyás has organized a special device for the season of season tickets, scheduled for December 11 to 19, with differentiated dates for renewal (from 11 to 15) and purchase of new season tickets (from December 16 to 19).

Thus, it will only be attended by appointment, which can be requested from 09:00 to 14:00 on the telephones 928 43 21 80/81 and all the time on the theater's website: www.teatrocuyas.com. In addition, the appointment that is requested, either by phone or on the web, may be in person or by phone.

In any case, and in order to speed up the process, each person may purchase a maximum of two tickets and the public is asked to decide which shows they wish to buy before making the purchase, so that the procedures do not last beyond the 20 minutes provided for each user.

On December 21, the sale for the general public will begin on the website and at the box office (in the latter case, by appointment).