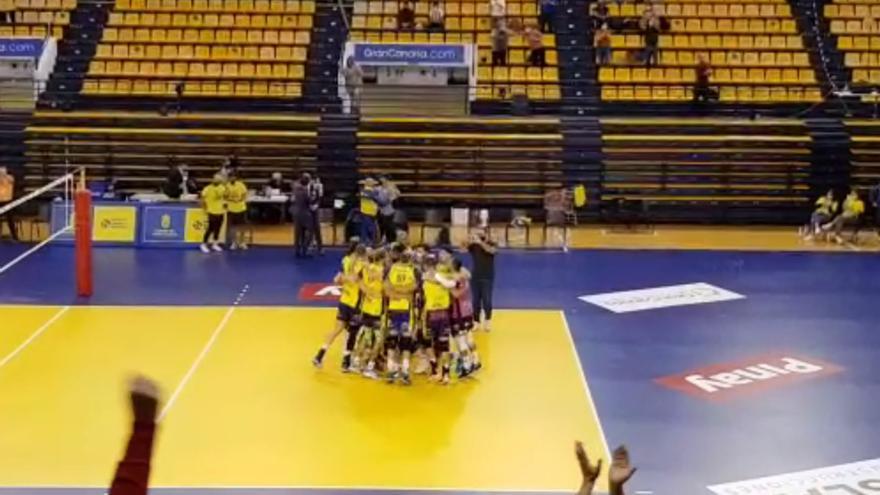 CV Guaguas will show a new cup-butler title in its showcases, the seventh cup-bearer, after almost a quarter of a century later the team led by Sergio Miguel Camarero won immaculately in the final against CV Palma by a resounding 3-0.

The greatness of the yellow team was demonstrated from top to bottom in the KO tournament. Three games played, three games that beat their rivals 3-0. Not as much as it presupposes a supposed equality in a final for the trophy, Guaguas swept Palma by a wide score (25-20; 25-15 and 25-14), in which Paulo Kukartsev also stood out among the players present, with 20 points yesterday and also earned him to be nominated as the Cup MVP.

About a hundred people gathered at the Insular Sports Center so that the Guaguas could repeat the feat that he achieved 24 years ago, when he managed to win the cupbearer title in the island fiefdom. This time, the rival was Palma, the same club with which he starred in great battles for league titles in the 90s. Of those duels between Rafa Pascual and Sánchez Jover, the war in this new century would go from the hand of Moisés Cezar or Paulo Kukartsev by the insular party against the opposite Rodrigo de Melo or the setter Ricardo Perini.

The first period served as contact with the two predators of the National League. Always the insular team ahead on the scoreboard, with advantages at almost all times of two points, commanded the scoreboard to pass judgment before the cheers of those present: family members, authorities and part of the squads that had already been eliminated in the qualifiers previous.

It was not until 13-14 that the Balearic team managed to get ahead in the light, when two consecutive failures in the receptions of the yellows to the visitor serve allowed him to get for the first time in this final cupbearer who lived with great tension in the stands and benches.

So much was at stake that nerves made their staging through coach Sergio Miguel Camarero before a referee decision after they pointed a point for Palma after a timid ball rejection could go beyond the limits of the field. The guaguero coach complained with excessive anxiety for the arbitration decision and his counterpart Marcos Dreyer told him to calm down. Past quarrels of two sports glories that were not resolved as players and now surfaced again as technicians.

The equality between these two colossi was maximum in the first period until 18-18. Juan Manuel González carried the weight of Palma with 4 points and in the club led by Juan Ruiz in the presidency, the captain, the wall of the League, Moisés Cézar stood out, blocking everything that passed through his dependencies.

From that tie, the balance settled for Guaguas with unstoppable inertia. Between the Crocodile Kukartsev and Cézar they put the direct to take control of the first set of the afternoon. They barely let any respite, beyond the repetition of a point for a double offense in one of the yellow shots, Camarero’s men put the direct and gave the first thrust to their rival 25-20.

The depth of the team re-founded this season, the one that Ruiz has wanted to reign in Spain again, allowed to give responsibility to all its stars in the second period. Guillerme Hage, the best receiver last year; along with Matt Knigge, the best center back last year, began to boil.

If the Balearic team wanted to return the coin in the first instance leading the score until 4-5, at that point the tables were turned and the Guaguas began to score one point after another until 11-7 with which Dreyer had to request time died to try that his men did not disconnect from the final for the first title of the season.

Even so, the superiority of the organizing team of the Cup continued to be evident by many indications that came from the benches. The income on the scoreboard was getting bigger and bigger and when they reached 16-10, with six goals ahead, Palma again requested a time-out to rebuild their morale with the intention of lifting the game.

Not even the applause from the green bench for each island serve prevented Guaguas from taking the second set and bring the trophy at stake to the club’s showcases. The shake they gave their rival was terrifying. 25-15 and the Balearic confidence on the ground against a team that accumulated its eighth consecutive set won in the Cup and that wanted to complete with a third and close the trophy immaculately, without giving any gap in its scoreboard.

And the local players started with smiles on their faces after seeing how they went 3-0 and took a comfortable advantage with which to manage the superiority they had shown throughout the afternoon at the CID.

Jubilation in the pavilion

The jubilation in the pavilion on Avenida Marítima was such that even the authorities’ box, with the President of the Government, Ángel Víctor Torres, present, gave himself up to applause for seeing how the seventh Copa del Guaguas took more and more shape.

With the 13-5, the gestural expressions of the Balearic Islands only showed that no matter how much they tried, the yellow team was infinitely superior to them. Two more points for the Gran Canaria and back to a timeout for Dreyer to at least not say that he delivered the spoon without sweating the last drop of blood.

So much advantage was shown on the scoreboard, that even the 19-10 for Palma, which came after a controversial play in which the ball stayed between the body of Rodrigo de Melo – the only one who did something yesterday, with 15 points – and the network, Waiter ordered to calm his people. Quite the opposite of the nerves he showed in the first set. It was a matter of time to sentence the meeting.

He concluded with an even more bulky 25-14 than in the second set, joy in the island club 25 years later and a new title in the credit of Juan Ruíz behind him.