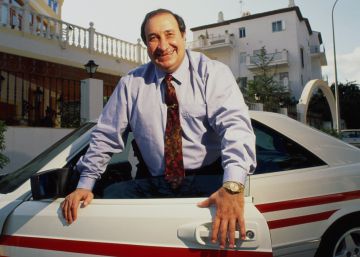 There was a time in Spanish football where the grotesque was imposed on the sensible by a mere aesthetic issue, as if the disfigurement of its actors was part of a master plan to entertain us beyond the ninety regulatory minutes. Spain looked at the sport king with an unprecedented fixation, almost sickly: the runs of the main sports newspapers were counted by millions and the specialized radio programs kept our curiosity awake until the wee hours of the morning. In that broth of constant expectation, Jesus Gil shone with his own light, the most caricatured of all those who conformed that channeled and explosive fauna that took the boxes of the stadiums. Without a doubt, he was the one who came closest to what Armando Discepolo, the great referent of the grotesque Creole theater, used to explain his characters: "My piety creates them but laughing, because when I recognize the smallness of their destinies, I find the enormity of its pretensions ".

Jesús Gil did not like football, he is recognized by even his closest friends in the new documentary series produced by the HBO chain about his life. The title of it, The Pioneer, offers little doubt about the supposed precursor character of a figure who landed in football thinking about politics and politics thinking about money: "Of course I'm here for the interest, I want to sell my flats … But this sinks and if we do not save it, you'll see how soon you do not sell a pair of trousers, "he tells a Marbella merchant at one point in the film. With that same messianic character, he ran for the presidency of Atlético de Madrid, which he won by crushing thanks to a formula that, since then, has been repeated from time to time in football with some success: a blinking signing and unconditional support of some media totem.

Everything that happened afterwards made it an essential part of a show that, far from what today can be understood as uplifting, caught us with the strength of the best thriller literary. Suddenly, all of Spain knew the name of his mother, his wife, his children, his horse, his enemies … The news of Atlético de Madrid went through excesses-often verbal, sometimes physical– of a character that captured the attention of the public based on the principle of expectation: we all wanted to know what I was going to say later, what I was going to do next, because the nature of Jesús Gil always pushed him forward, never backward.

As a great gambler who was, lover of the game until the last consequences, his balance as president must be sought at the extremes: the euphoria of a historic double and the degradation of a judicial intervention decreed by Manuel García-Castellón, judge of the National Court . This is how Luis Manuel Rubí, a judicial administrator with full powers, arrived at Atlético de Madrid. "They all made sloppy, but none as serious as the then owner of Atletico de Madrid. He came to do more or more grotesque practices than in Marbella ", declared Rubí himself. The voice of Galicia years later. Maybe that was the scenario that was found when landing in our soccer, maybe it's just the one that left us.