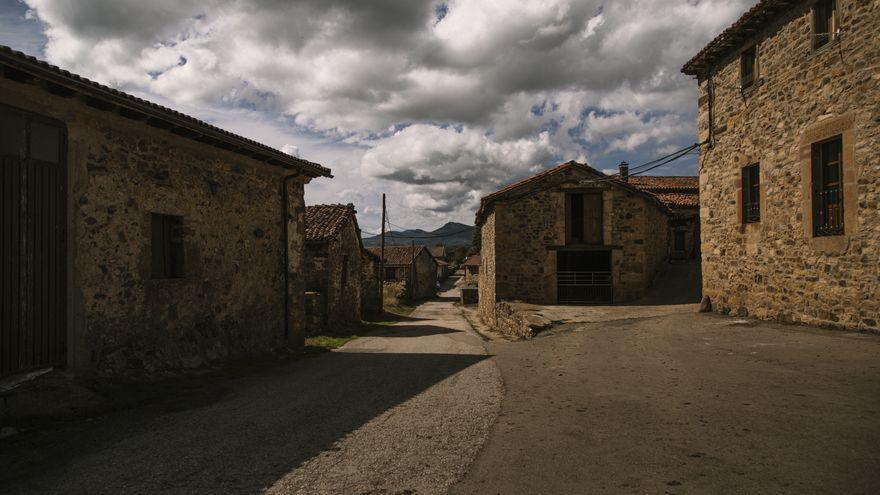 Santa María de Redondo, in Pernía Palencia, is the last town on the road. Beyond are only the foothills of the Sierra de Hijar and, on the other side, Cantabria.

To get there, you have to travel from Cervera de Pisuerga a winding road between pine groves and broom, until reaching San Salvador de Cantamuda, take the detour to the PP-2176, which runs parallel to the river, and try to avoid the many unevenness of the road, escorted on both sides by fields of an intense green where the horses graze and cattle.

With its stone houses, its heraldic shields and its centuries-old inscriptions on the walls of the houses, it is perhaps one of the most beautiful villages in the Palencia mountain. It gives an air to the Hobbit Shire.

On weekends it is visited by dozens of visitors, especially in summer, to do the route that leads you to the Cueva del Cobre, where the Pisuerga is born.

However, very few of these tourists know that in this small town, where there are currently 38 people registered, according to the latest data from the National Institute of Statistics (2020) -in winter living there there are many fewer-, the ancestors of the Grimaldi were born.

Yes, those same ones, those that govern the Principality of Monaco.

“There has always been a halo of legend with this, that the royal family of Monaco has origins in the Palencia mountain; it is still talked about and it is something quite well known, but the fact is true“, clarifies Jorge Ibáñez Díaz, the young mayor of Cervera de Pisuerga, a graduate in History and an expert in the region’s lineages.

“In the 50s, Laureano Pérez de Mier, who was from Redondo, did the great job of searching with the emptying of parish books, and the filiation was perfectly established“, he recalls at the rustic beech tables of a bar near the town hall, whose streets are getting used to the only rush of the usual after a summer with mountaineers and nature lovers filling hostels and inns.

The countrymen greet each other in the arcades of the municipality, also characterized by having many heraldic shields on a multitude of facades, raising their heads, sometimes releasing at the same time a laconic “come on” or a “come on, nice guy.”

It is not strange in this beautiful area of ​​Palencia, in the irregular triangle formed by Cervera, Guardo and Piedrasluengas, if you come a lot, someone ends up telling you, half jokingly, half seriously, because they have heard it from their parents or his grandparents, who have the same surnames of those who were related to the Grimaldi: Terán and Mier, De Celis or Torre. But it’s true? Are they family?

Let’s go back to Laureano, who focused on history, back in 1957, when he published his research in The Palencia Diary after going not only to the parish books -he had easy access, he was a priest-, but to the Cervera Notarial Protocol and the Archives of the Royal Chancery of Valladolid.

In it he explained that it all started with Gregorio de Mier y Terán, born in 1796 to a noble family and baptized in San Juan de Redondo (the population sister de Santa María), who emigrated with his wife, Mariana de Celis, also from the same town, to Mexico, where he made a great fortune. In fact, there he was known as The Mexican Rothschild, and among his achievements is having founded Nuevo Laredo.

One of his granddaughters, Susana de la Torre Mier, was the one who married in 1881 in Paris with Magencio de Polignac, of one of the ducal families of France. And one of the children of this marriage, Pedro de Polignac, married Carlotta Grimaldi, the natural but illegitimate daughter recognized by Louis II of Monaco.

It was in March 1920. That same month Pedro de Polignac changed his name and coat of arms to the House of Grimaldi. From that marriage were born Antoinette and Rainier, father of Albert II of Monaco, current sovereign prince.

“In Cervera we keep the registers of hidalgos and pecheros that were used to distinguish the general state of the nobility and among them they specify the reality of each town. In them appear the ancestors of Rainier of Monaco in that line“confirms the mayor as we walk one of them through the hallways of the Town Hall.

Photographs of farm implements decorate some rooms and in the middle of one of them the large clock in the square looks gutted waiting to be fixed.

The mayor, already notified of our arrival, has open on the table a list of members of the list of hidalgos and the general list of the year 1737. It is worn and yellowed by the passage of time, but it clearly shows the names of Felipe de Mier y Terán and his son Felipe de Mier, “sondalgo de execuoria”, who, according to the first mayor, “would be the ancestors of the Valley of Redondo de Rainiero de Monaco”. They are registered with the qualification of “gift” because they were a “category within the nobility”. “It was one of the strongest families from the north of the province; head of lineage “, reasons Jorge Ibáñez.

21.5 kilometers from there, in Santa María de Redondo, where it takes a whopping 28 minutes to get there despite the short distance, it has already struck 2.30 in the afternoon. You don’t see a soul on the street. The sun is shining and the temperature is pleasant. We walk around the town, but no one is there.

On the way back, we found two women between the ages of 60 and 70 at the entrance to the town, chatting amicably. One of them is in her garden; the other out. We asked about Vicente, a former coal miner (many men from the town worked in a nearby mine, already closed, all their lives), what about 20 years agos appeared in a report in Interview stating that he was Rainier’s distant cousin.

There is silence. They look at each other and are silent. They are suspicious.

Live opposite says one of them, the one inside her house, “but she’s not there.”

It takes a while, but the other woman ends up admitting that Vicente is her cousin. He sports white hair, a kind face, and a soft voice. It’s called Ascensión Torre de Celis. He is 71 years old. “Vicente is more for the other branch (Mier and Terán), but yes, Rainiero’s great-grandmother was from here.”

– And how do you get along, because of course, they are like family?

– Neither cold nor hot-, it diminishes its importance

– Yes, man when they appear on TV I do like to see them …

Ascension does not seem very given to talk about his ancestors, but little by little he is granting. “Their story is curious, it was of those people who went to America, some drowned in the sea, and others arrived and were lucky in business. He married that descendant and that coincided [emparentar con la realeza monegasca], it is not so difficult. They built a lot of empire and created the Fundación de Mier“, subtracts the woman’s merit, who on the porch of her house shows us some press clippings of the Grimaldi and a copy of Laureano’s investigation.

A few meters from your home, heading to the center of town, there is a memory of that fortune. It is the old school, renovated, but it still has an inscription that reads “Don Antonio de Mier and his wife, Her Excellency Mrs. Duquesa, donated this school”. Don Antonio was one of Gregorio’s children, and the uncle of Susana de la Torre Mier, who was related to the Polignac. Together with his wife, Isabel Pesado, from a noble family in Mexico, he visited the town of his ancestors and watered the area with money, which allowed the town to be one of the richest in the region.

“In fact, 1904 is known as the year of money”, recalls the mayor of Cervera, because the family distributed half a million pesetas among “Piedras Luengas, poorer, which was where the mother of Gregorio de Mier y Terán was born, and Santa María de Redondo, which was the origin of the Mier “.

The mayor of Cervera is not so clear that there are still relatives of Rainiero in Palencia: “Today in the Palencia mountain there are no descendants who may have a relative closeness to the Monaco family. They may or may not have common ancestors, but they have no connection . What is common blood with Rainier’s family? Of course, yes, there are always kinship options, but not only for the Mier, but for the López, the Alonso de Piedrasluengas … “.

In Santa María de Redondo it has already passed three in the afternoon, and it is time to eat.

-Well, let me tell you, Ascension, that Rainier is given air, the shape of his eyes, like this, a little together …

Ascension smirks, half joking, half serious, lets go, shrugging: “The genes are there since the seventh generation.” “I don’t aspire to anything of his own either, I am very satisfied with my children and my people,” she then concedes, and when asked if she would let us take a photo, she denies the older one: “If my children find out that I have spoken with you all…”.