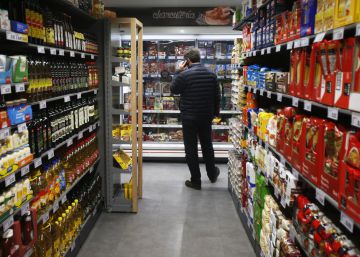 Ready at the ready, a consumer enters the supermarket with the unwavering decision to acquire the most sustainable products for the planet. But the plan is cracking as the minutes pass. Doubts pile up: what's better, milk in a plastic bottle or in a tetrabrik? And what to do with aluminum foil and film of plastic? Canned beer or glass bottle? No container is perfect and it would be necessary to know what contaminates the product during its entire life cycle: energy consumption and CO emissiontwo in its manufacture, distribution and recycling. A task so complicated that the experts end up focusing on the possibilities of reuse and recycling of packaging in those that are packaged or in recommending products of proximity, among other suggestions of a general nature. The Ministry of Ecological Transition does not have any official information about it.

Celia Ojeda, member of Greenpeace, argues that "of all the plastic that reaches the treatment plants only 25% is recovered, the rest is burned or goes to the landfill". However, Ecoembes, the manager of these containers, replies that it recovers 78% of light containers (bottles, cans, briks, bags, wrappings, containers of yoghurts …). In this welter of contradictory data, Greenpeace reaches the conclusion that "the problem is of such magnitude, the management of this waste so inefficient and so confusing the figures handled, that the way of consuming must be radically changed". With some or other figures, the citizen has in his hand the decision to make his daily shopping more sustainable.

Milk, oil, water, yoghurts, in which container? When in doubt, the largest container. Everything mini uses a large amount of material for a small dose of product, as well as being more difficult to recycle. Glass, 100% recyclable multiple times without losing quality, is one of the best options. Plastic bottles are also treated, but not on many occasions and depend on the type they use. Only PET (used in water bottles) can be converted back into a container that is in contact with food.

The tetrabrick is more complicated recovery, because it has several layers: cardboard, plastic and aluminum. For Greenpeace it would be one of the worst options. The largest producer of bricks, Tetrapak, ensures that 75% of the packaging (cardboard) is recycled. On the other hand, polyethylene (20%) and aluminum (5%) of its composition end up in the landfill or are "energetically valued" (burning to produce energy), since last year China banned the importation of these materials. At present, there are no plants in Spain, but "it's temporary," says Tetrapak.

Soft drinks and beers. Aluminum and steel cans, glass bottles and plastic cans are the most commonly used containers to contain soft drinks and other beverages. All three are produced with non-renewable resources (minerals and fossil fuels) and require a large amount of energy for their manufacture and transportation. The companies that treat waste ensure that aluminum and steel recover 100%, therefore, they would be as good as glass, taking into account their recycling. But from Greenpeace warn that too light containers escape the selection made in recycling plants.

The mess of the bags. Avoid single-use ones, even paper ones, even though they degrade before plastic ones if they end up lying anywhere. The plastic bags of a single use better to forget them, even the biodegradable ones that "are a false solution", because in spite of the vegetal material of his composition, the majority contains plastic in big quantities that does not degrade in the marine environment, sustains Greenpeace . The best option is reusable, which can be fabric or other materials. You can also buy bags of more than one use for fruit and vegetables, thus avoiding thin plastic bags that are not charged. These simple choices result in savings of at least 144 single-use plastic bags per person each year, adds the NGO.

Fresh products. The best recommendation in this case is to bring yourself a reusable container from home. If necessary, there are cellulose trays (100% compostable and that are recycled for high quality paper). If you have to choose plastic, better the finer instead of the white poliespán trays. Packets of slices of a food separated with plastic sheets should also be avoided. "That plastic between the food is not recovered, because it is not a container and is not managed," warn from Greenpeace.

Transparent film or aluminum to pack a sandwich? Better a scoop or a taper, leaving aside the aluminum foil and the film plastic. Containers with a lid are recommended for the microwave or for storing food in the refrigerator. Aluminum is 100% recyclable an indefinite number of times without affecting its quality; therefore, in that aspect, it would be better than film transparent. But Greenpeace warns that with remains of food "no one is profitable to separate it in a plant." Jesús Alonso, director of the Fundación Vida Sostenible, gives the solution: "I use the paper bags where the bread is packaged. If the sandwich is very sticky, you can put two or opt for the thin plastic bags in which you put the fruit. On the Internet you can find beeswax and other reusable wrappers for sandwiches.

Cleaning products. The Ministry of Ecological Transition reminds that there is a European Ecological Label (EEE) for detergents, dishwashers, soaps, shampoos, conditioners and multi-purpose cleaners. The aim is to promote products that reduce adverse environmental effects, in comparison with others in the same category. You also have to take care of the containers, which carry the same problems as for other products. Bulk sale would be the best option.

Paper or cloth napkins? Toilet paper wrapped in plastic or paper? The rolls of paper are usually sold wrapped in plastic, and it is very difficult to find them loose or packaged in paper, which would be the most appropriate. All are recycled paper, say from the employers Aspapel. As for the napkins, the cloth ones are more recommendable for the environment, although water is consumed when washing them.

Empty glass bottles can not be returned to shops, as was done in the past in exchange for some coins, which allowed their filling. Neither the plastic nor any type of container. The current system, implemented to comply with Law 11/1997 on Packaging and Waste, does not contemplate it. Only the Horeca channel, which includes hotels, restaurants and cafeterias, has access to this model. Conservation organizations such as Ecologists in Action or Greenpeace advocate implementing the return system, which, they say, would allow the recovery of containers that end up in the landfill and are not reused. "It would be a complement to the method that is used now," they say in Greenpeace.

At present, the citizen detaches himself from the plastic containers by throwing them in the yellow container (managed by Ecoembes) and the glass containers in the green one (controlled by Ecovidrio). From there they move to treatment plants where raw materials are separated to send them to other companies that recycle them. Both organizations are financed with the contributions of the member companies, which, depending on the number of packages they put on the market, pay an amount.

The other procedure that could be implemented is the Return and Return Deposit System (SDDR). The companies that manufacture items with packaging would charge an amount for each container, which would be reimbursed to the customer if returned in a machine that would be installed in the stores. It was tried to implant in Valencia, but the businessmen rejected it and provoked the dismissal of the Secretary of the Environment Julià Àlvaro in February 2018.