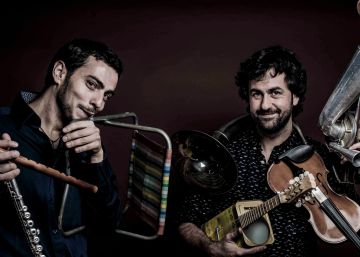 Sometimes a good song is enough to travel, without having to take a plane, a train or a car. The musician Diego Galaz, member of the duo, said it Fetén Fetén, during the concert they held last Saturday at the Inverfest festival in the Paco de Lucía de Alcobendas auditorium. Beyond the fact that anyone who is moved by music knows that a song is an artifact with transporting virtues in the memory, it was impossible not to agree. Fetén Fetén travel back in time with their recovery of folk sounds from Spain and other parts of the world.

This is attested by his show: The magical planet of unusual instruments. A fascinating journey through the musical instruments that mark tradition such as the violin, the mandolin, the accordion, the flute, the bagpipe, the hurdy-gurdy or the drum with which the duo manages to reflect on the values ​​of creativity, ecology , recycling or respect for different cultures. A show designed for children, but in which adults enjoy even more.

For this, the formula seems simple, although it is not. The concert results for many moments in a very didactic talk and with skillful touches of humor. Diego Galaz and Jorge Arribas comment on where the instruments come from, how they sound and why they sound like this and even how some can be made with recyclable materials, by hand in our lives, such as the percussion of spoons and pans, the bagpipes with brick of wine, the violin with cigar box or the saw or the chair camping flute. It is in this method where Fetén Fetén turns music into an exciting task of recovering memory and revaluing identities.

Seen as a kind of ‘luthiers’ from empty Spain, Fetén Fetén, a duo created in 2009 after the end of the group La Musgaña, have been defending the Castilian-Leon heritage that they suckled as children for many years. I remember hearing about them for the first time five years ago in El Patillas, the famous Burgos tavern open since 1914, full of charm, photographs, instruments, jugs and beers and that in 2020 saw unfortunately losing its owner Amando. There, at that time, we met the musician Igor Paskual, ​​some boys from MODA, the journalist Ángel Carmona and great professors from the University of Burgos to see each other play as they only played in old taverns, between improvisation, the noise and the alcohol. El Patillas was the home of Fetén Fetén, the symbolic and wonderful space where they showed their skill and love for their sound work.

But they not only recover the legacy of their land. The duo vindicates with passion and curiosity all kinds of styles such as the jota, the son, the chotis, the tarantela, the bolero, the waltz, the muiñeiras … It brings to the present a rural identity that each year disappears more in Spain and that not only It connects us with our past, but also with other cultures in Europe, Africa, Asia and Latin America. Three discs like Singable, Overseas melodies and Danceable they present such a rich and beautiful sound horizon that they should be studied in schools.

From the perspective of the trends that move the commercial media, Fetén Fetén could be seen as something curious. However, that is to simplify their work to the anecdotal, more in this fast and forgetful consumer society. His work is commendable and should be, like that of many other artists from all regions of the Peninsula, much more visible and valued.

After all, the Castilian-Leonese duo reminds us that Spanish rhythmic culture is mestizo, comes from centuries of influence and that music travels across borders, kings, governments and marketing companies. The music is as complex and exciting as the identity of its peoples. And Spain has many identities coexisting for centuries and making itself heard through rural, happy, danceable, lively sounds … illustrators of a land full of rhythm.

Fetén Fetén reminds us of it and also with quality and enthusiasm, so much so that it makes us participate. It is his greatness.