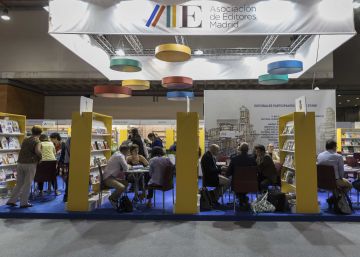 It seems that it was yesterday, but more than a decade has passed since the bankruptcy of Lehman Brothers, a circumstance that illuminated the financial crisis that ended up mutating in the Great Recession. The collapse of the US bank made the global economy sway and was the first major victim of a terrible fall in activity that hit almost all economic sectors of the plant. The publishing industry failed to save itself from the perfect storm generated. In Spain, after reaching record turnover in 2008 (with 3,185 million euros), it had a business loss of 31.5% until it hit bottom in 2013. But those bad times have been left behind. "Little by little we have turned the page," says Miguel Barrero, president of the Federation of Publishers Guilds of Spain (FGEE). "Today we grow with optimism," he says.

Since 2014, this cultural sector has not stopped growing, although it has not yet recovered the levels before the crisis. At the end of this year, it seeks to link its sixth consecutive year of growth. In 2018, the publishing sector had a turnover of 2,363 million euros, 1.9% more than in 2017. And waiting for the Christmas season, one of the most important for publishers, positive figures are already predicted for the year as a whole . The main strength of the business, despite living in an increasingly technological world, is still the paper book. "At the end of 2019 we expect, at least, a rebound similar to last year," explains Barrero. The vitality and muscle of this industry will be seen in the 37th edition of the International Book Fair (Liber). "The event is the great world showcase of the book in Spanish," says the guild representative.

The celebration – which will take place next October 9 and 11 in Ifema – will be attended by almost 400 publishers and hundreds of professionals (editors, authors, literary agents, booksellers …) from 17 countries. Although the exports of the Spanish industry have as their main market the countries of Latin America and the United States, the objective of the event is that local firms reach all corners of the world. On this occasion, the Spanish book seeks to make its way in the countries of the Middle East. For this reason the organizers have chosen the emirate of Sharjah, one of the seven that make up the United Arab Emirates, as a guest of honor.

The invitation is not casual. Sharjah organizes an international book fair every year that has already become the third most important of those held in the world, and the first in its area of ​​influence. Last year it attracted 2.23 million attendees and 1,874 publishers from all over the planet. "The book is the best means of transport for the Spaniard to cross borders," says Barrero.
This year's Liber edition will not only be a commercial exchange space, but also a meeting point for debate and reflection on the industry. Topics such as new technologies, the promotion of reading and the protection of intellectual property will take up the discussions in the three days of holding the exhibition. Added to this will be the delivery of various awards. One of the most emblematic, the Liber Prize, will be the one awarded to Mexican writer Juan Villoro. “The author's versatility is recognized: it covers different genres (the novel, the story and the essay, among others) and his work has contributed to the dissemination of the Spanish language,” concludes Barrero.

The CPI remains at -0.8% in November after rising the price of electricity and food cheaper