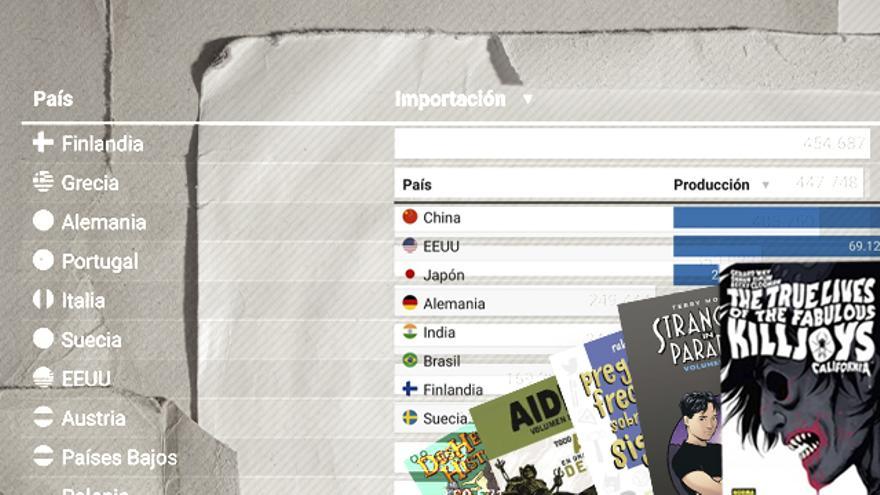 Paper is finite, but it is used in countless products. They can be hygienic and sanitary, such as napkins or wipes; or containers and packaging, such as courier packages. Because cardboard is, in short, the combination of several layers of this material. It is also used for something essential that adorns the shelves of many houses and stores: books. And the consequences of its scarcity are already being felt.

Several publishers have had to delay their releases, so some of the titles scheduled for November and December will also have their publication date altered. “We were a bit warned. More than delaying, we have redistributed, which is what I think the publishers will have to do. Just as much news as we thought can not be thrown away. If we were going to launch 10 titles in two months, perhaps now it will be in four months, waiting for everything to stabilize “, explains to elDiario.es Carles Miralles, editor of Yermo Ediciones and Arechi Manga, two houses dedicated to comics.

That of Miralles is one of the affected labels, but not the only one. Others, as Norma Editorial o Fandogamia, they have also had to make adjustments to the calendar. From the latter, they explain that at first it seemed a case of small printers, but that as the paper reserves are emptied, even the largest companies report possible delays in production. “In our case we had paper manufactured for some of our most popular formats, but we have already been warned that, to manufacture more custom paper, the waiting time is about three months,” they lament.

Production is only part of the problem. Prices have also risen, and both Yermo and Fandogamia agree on the figure: printing costs are up 20%. “We have seen it coming and luckily we have saved the Christmas campaign, but if it affects us a lot we will have to reduce the number of titles we release per month or raise the Retail Price, because in the end it is the only solution for it to be the publisher is viable, “says Miralles. From Fandogamia, on the other hand, they maintain that “it is too early” to know how this higher disbursement will affect and that “it is not easy” to justify before the general public that a volume now costs more. “We only contemplate it if we see that the situation becomes untenable in the long term. We are a small publisher with tight margins: in six months we will see how things go.”

It is not being easy for printers either. From Artes Gráficas COFÁS they argue that when asking factories for explanations the message is “that there are no raw materials and that the supply arrives much later.” The price of the roll of paper has risen and there is no other option but to raise the rates. “In the end we have no choice but to pass on those costs,” they explain.

This newspaper has contacted other major publishers to find out if they are also experiencing similar problems, but some have not responded and others have declined to participate in the report. The same position is maintained by the Spanish Association of Pulp, Paper and Cardboard Manufacturers (ASPAPEL), which has refused to collaborate for “compliance with the rules of Competition Law that prevent commenting on the market situation.”

On the other hand, Manuel González, president of the Madrid Publishers Association (AEM), argues that, although the large publishing groups “are not alien to this situation”, they have minimized their impact by having “contracts agreed prior to this crisis “. Meanwhile, small publishers are adjusting their plans to prioritize the spins of their best bets. González trusts that the situation will normalize “in the second half of 2022.”

Supply difficulties and the rising cost of the sector are a reality. But where is the origin of the conflict? The AEM spokesman agrees with the Yermo, Fandogamia and Norma editorials in pointing out several causes: the rise in the price of electricity, the stoppages in factories during the COVID-19 pandemic at the same time that the demand for leisure increased in the home, or the use of paper and cardboard for other products (such as parcels). “It was the perfect storm,” says Miralles. But there are still more elements in this great chain.

According to the latest annual statistical report prepared by ASPAPEL, to which this medium has had access, in Spain there are 69 paper factories and 10 cellulose plants, mostly concentrated in Catalonia. In 2019 they were able to produce 6.4 million tons of paper and cardboard, a figure close to the 6.8 million that are consumed in the country. But Spanish production, in reality, represents a very small number that remains within the borders: in 2020, 5.4 million had to be imported. And this has a direct consequence: relying on international trade to stock up on raw materials. With everything it implies.

“What we are experiencing is not concrete in the paper sector, it is one of the biggest unprecedented shortage crises in the world”, details Cristian Castillo, researcher specialized in logistics and production operations, and professor of economics at the Open University de Catalunya (UOC). He adds that this case is motivated by a reason: China’s geopolitical strategy. “Imports to Europe come mostly from Africa, and China has enough resources deployed there to control where those exports go. So they are deciding to prioritize their own supply.”

However, if the aforementioned ASPAPEL report is observed, imports of paper and cardboard to Spain come mainly from three European countries: Finland, France and Germany. A priori there is not much relationship with the Asian continent, at least at the purchasing level, but the chain of intermediaries is extensive. “The final product may be arriving from those countries, but the raw materials to be able to manufacture it are also imported from China. In the end, in one way or another everything is connected and taking into account the production capacity that China is having on Everything at the material level, at some point they have to go through there “, Castillo points out.

In addition, another element must be taken into account: chaos in shipping, which according to the United Nations represents around 80% of the goods consumed all over the world. “Some ports of embarkation have been paralyzed by the confinement, and many others continue to collapse because they are not able to dispatch all the containers that arrive. It is a sum and continues that some maritime routes have increased the cost of freight up to 400% and this ends up having an impact on the final product. A company that requires this raw material sees that it comes much more expensive, later and in less quantity, “says the teacher.

Given all this, one might think that one of the solutions would be to digitize the content to save logistics costs. And yes, it is an option, but then another crisis enters the scene: the one with the microchips. “Although it gives us the feeling that behind the digital there are not so many media, there is a whole machinery at the level of servers and electronics. So, if we suddenly had an exponential increase in paper readers who switch to e-book, that would require an infrastructure that would lead to the need for technological materials that depend on semiconductors “, explains the logistics expert.

The short-term solution is practically impossible, since it would imply restructuring an entire sector that has part of its logistics chain relocated. But perhaps, in the future, there are ways to act to cushion future crises. “Although there is a part of raw material that we will have to look for outside, such as different types of wood, the future I envision it by relocating part of the industry that we have let go and not being so dependent on other countries”, declares Castillo.

However, although the ecological and social impact of the paper industry is less than that of plastic, this does not mean that it is without consequences. So for Greenpeace the remedy is not just a change of material, but a “throwaway” mentality. Perhaps this way the deforestation of forests or the emission of waste can be avoided so that reading a book, even if it is made of paper, does not pose a problem.