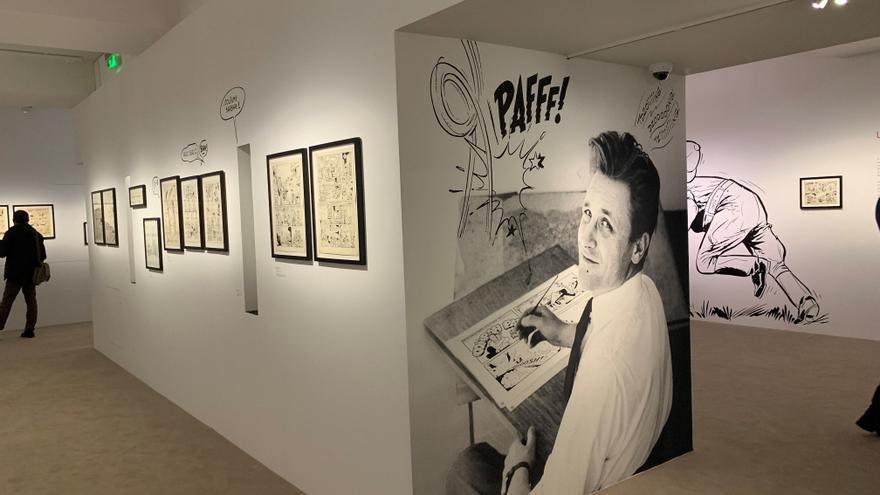 Paris, May 25 (EFE) .- A year after his death, the daughter and widow of the cartoonist Albert Uderzo, creator of Asterix and Obélix, remember the artist’s exciting career with more than 250 works from his personal archive, from drawings from childhood to the success of the most famous Gaul in the world.

“My father left at the beginning of the first confinement and we could not give him the farewell we would have wanted. We have worked against the clock to give his public a form of tribute,” explains Sylvie Uderzo, curator of the exhibition “Uderzo, as a magic potion “, at the Maillol Museum in Paris.

Sylvie and Ada Uderzo, his widow, have recovered a large archive that also shows the organizational skills of the cartoonist, who died at 92 years of age, from a family of Italian immigrants who had fled from fascist Italy in the 1920s and that he kept throughout his life even his school sketchbooks.

An Albert Uderzo, barely 7 years old, who drew fish and animals with surprising anatomical precision and illustrated children’s stories with vignettes that did not seem to have been painted by a small child.

The creator of Asterix made his first comic when he was 14 years old, after he started working as an apprentice at the Parisian Publishing Society at 13, which published magazines and press supplements, where he learned to handle the illustration of logos that he would later capture. in the titles of their series.

“I wanted them to expose these notebooks because you can see their work since childhood. The gift was already there,” says his daughter, who details that he came from a family of artisans and workers unrelated to painting, but where all the brothers knew how to draw.

When, after doing military service, he returned to France and could not find work, he considered accepting his brother’s offer and becoming a truck driver.

Fortunately for the admirers of his comics, a newspaper signed him up to illustrate the events and he was able to continue drawing.

Little Uderzo dreamed of being the new Walt Disney and becoming the “Disney of rue Montreuil”, the street where he lived with his family in Paris.

With barely 20 years old, the cartoons became angular and heroic, in the purest style of the science fiction comics that were beginning to become fashionable in the United States.

The original plates and notebooks on display are an overwhelming example of how his first 25 years of life marked his path and carved his imagination.

Encouraged by his older brother, he spent the years of World War II in a small town in the Brittany region, where he discovered forests, Breton legends, and came into contact with members of the Resistance who were facing the occupation. Nazi.

In 1959, the appearance of the first plates of Asterix and Obélix, a comical couple from a fictional village in northwestern Gaul who stand up to the mighty Roman Empire, published in the magazine Pilote, had a particular echo in French society.

Of the two floors that the Maillol Museum dedicates to the exhibition, one is dedicated exclusively to the success of “Asterix and Obélix”, from its conception in a small flat on the Parisian periphery with which, more than an ally, it was its partner during twenty-five years old, René Goscinny, who wrote the stories.

After Goscinny’s sudden death in 1977, Uderzo was about to give up his pencils, but pressure from readers encouraged him to continue and keep the saga alive until 2005.

In the last decade, the adventures have been recovered by the screenwriter Jean-Yves Ferri and the cartoonist Didier Conrad, who have taken the witness of the world-famous comic strip.

For Sylvie Uderzo, this exhibition is, like the comics, “for all audiences”: “Asterix is ​​61 years old, children, young people and grandparents have been following these works for decades”.