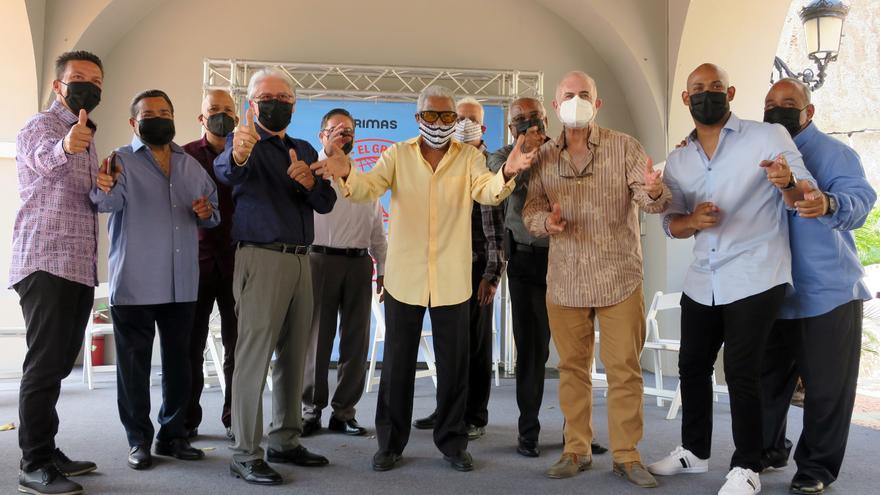 San Juan, Apr 13 (EFE) .- The legendary salsa orchestra El Gran Combo de Puerto Rico bets on its musical "own identity" for the success of its new album, "En Cuarentena", before the grabbing of the urban genre in the industry, the director of the group, Rafael Ithier, told Efe.

"The musical timbre of the Gran Combo cannot be changed. We must continue that way," Ithier told Efe on Tuesday in a telephone interview which was also joined by Jerry Rivas, the oldest and most experienced singer in the orchestra.

That "timbre" or "self-identity" referred to by the 94-year-old Ithier, specifically equates "the sound" that identifies the legendary orchestra, which next year celebrates its 60th anniversary.

"I would say that first it is the musical arrangements that fit with El Gran Combo and that for them we do not do anything very complicated," said Ithier.

Given this, he mentioned that "the difference" that El Gran Combo de Puerto Rico, a group known as "The University of Salsa", among other nicknames, has with other orchestras is that the others "do not allow the singer to show off and its intention is more musical than rhythmic ".

"There is a lot of group that has the same musicians, arrangers, singers and who resemble each other and there is no sound of their own identity," emphasized the co-founder of this legendary group.

INCLUSION OF GARCÍA AND HERNÁNDEZ HAS BEEN ESSENTIAL

And despite the fact that El Gran Combo currently has two relatively new voices to accompany Rivas in musical performances - Anthony García and Joselito Hernández - the orchestra does not lose its musical identity.

"This entry by Joselito and Anthony is to give another vibe to the Gran Combo, with other verve, with another desire to do different things and for people to see youth. These guys today have absorbed that and they know where to go," he admitted Rivas.

This, in turn, will help the orchestra, founded in 1962, remain current, as does the salsa genre, despite the fact that fewer and fewer Puerto Rican musicians dare to enter the Caribbean rhythm in the face of competition. of others with the greatest rebound worldwide.

THEY BET ON THE "DARE" SALSEROS

Some of these young artists who have dared to continue the legacy of salsa legends in force in the genre are Francisco Rosado "Pirulo", Willito Otero, Carlos García, Norberto Vélez, Juan José Hernández and Gerardo Rivas.

The oldest of the Rivas, for his part, said that on one occasion he had to undergo surgery on the vocal cords and invited his son Gerardo to accompany García and Hernández in a rehearsal.

"I recorded them on video with my cell phone and then I showed it to Ithier. I told him: 'Imagine a front like this from the Combo'. And he replied: 'This way we will last a thousand more years,'" he said.

"These people have talent to spare. I trust that if we give them the opportunity and promote them, well then. If they do not promote them, then they will never know who they are," Ithier acknowledged.

RIVAS RESPECTS THE DARE OF THE YOUNGEST

Rivas, for his part, admitted to Efe that "you have to take your hat off to those boys, because they got into this genre in the hardest time and in a very bad time" economically.

"We have to give them the opportunity because if not, we will be left with nothing," said Rivas, a member of El Gran Combo since 1979, at 21 years of age.

Similarly, the Puerto Rican urban artist Rafa Pabón, a graduate of the Escuela Libre de Música de Puerto Rico, has bet on salsa by recording a song with the Puerto Rican salsero Michael Stuart, while Daddy Yankee recently made a collaboration with Marc Anthony.

About the artists and main representatives of the urban genre worldwide, such as Bad Bunny and Daddy Yankee, Ithier said "I compliment and congratulate these guys."

ITHIER HIGHLIGHTS THE SUCCESS OF THE URBAN GENDER

"It is a genre that they have created and have stayed with the world. It is an evolution that cannot be touched, but Latin music, Spanish-speaking, is the Cuban rumba. In other words, this is the music of those of us who speak Spanish. ", he emphasized.

"They love us very much and we respect them. Keep them going," added Ithier, leader of this orchestra that has had the opportunity to perform in countries as far away from the Caribbean as Australia, China and Russia.

"Nobody can take away the 'bailao'. What we need is to go to Mars," said this legendary nonagenarian musician in a jocular tone, who says that he will never retire from music despite his age.