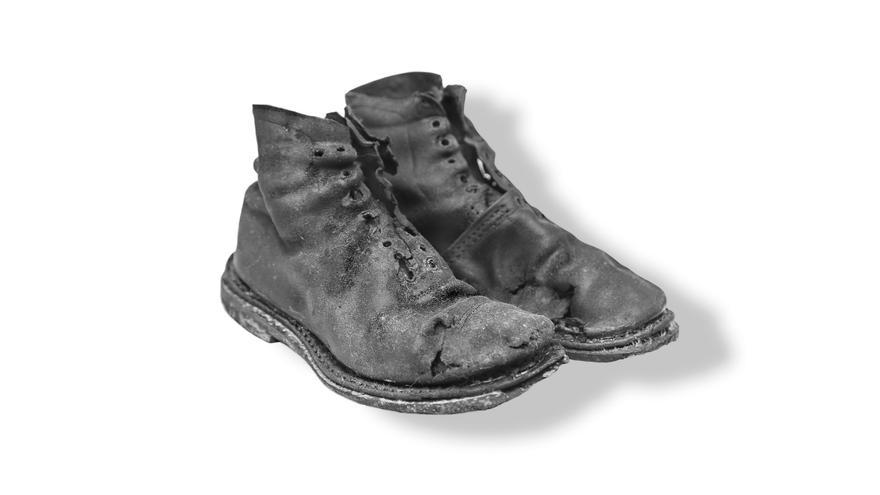 Black and white images, naked objects. And words that bring to life the material culture rescued from Franco’s mass graves. The Association for the Recovery of Historical Memory (ARMH) finalizes the publication of The voices of the earth (Alkibla publishing house), a book with 39 photographs by José Antonio Robés and as many texts by writers, activists, musicians, journalists and poets.

“A key, the last one with which he closed the door of his house to never open it again; a lighter, with which he lit his last cigarette, glasses, with which he could see the face of whoever pulled the trigger, barely a handful of coins that were never spent, or the bullet itself that ended hundreds of dreams that never came to pass “, says photographer José Antonio Robés to elDiario.es.

Each photograph is accompanied by a text in The voices of the earth. And each author has had “freedom” to enliven the graphic proof of Historical Memory through the objects carried by the disappeared persons. The book matches the 20th anniversary of the first exhumation in Spain, with archaeological criteria, of a Francoism grave: the 13 Republicans executed in Priaranza del Bierzo (León). A milestone that was also founded by the current Association for the Recovery of Historical Memory.

For the journalist and writer Carlos Hernández, one of the participants, “the enormous virtue of this work is that it serves as a means of communication between the reader and people who were murdered eighty years ago. Anyone who has been in an exhumation knows that the graves speak “.

“After so many decades of silence and forgetfulness, recovering objects from disappeared people, photographing them, commenting on them, is an important process to recover the memory and stolen identity of so many people”, reflects the journalist and writer Olga Rodríguez. “I was very impressed by the object that I had to comment on for the book: they are two twins that belonged to a tailor, shot and disappeared in 1938. They were found together with his remains when they were exhumed. They are decorated in such a way that they look like two eyes, two eyes that look at us and, in doing so, ask us to look at them. “

Rattle, with text by Antonio Gamoneda, poet and Cervantes Prize. Catalina Muñoz was assassinated in September 1936 and buried with her son’s toy nine-month-old Martín de la Torre Muñoz. The rattle was recovered in 2011 from a common grave in the Carcavilla Park (Palencia), by a team from the Aranzadi Science Society. Martín has lived to see the exhumation of his mother and to recover his toy.

Given, text by Juan Carlos Mestre. In May 2017, during the exhumation of grave number 1 of the civil part of the Guadalajara cemetery, the poet Juan Carlos Mestre found this die while helping to sieve the earth. The object was next to the remains of Eugenio Molina Morato, murdered on November 16, 1939. After the discovery, the famous poem by Stéphane Mallarmé came to mind: ‘A hit of the dice will never abolish chance’.

Boots, text by Rozalén. Boots found by the ARMH in 2014 in a mass grave outside the Chaherreros cemetery (Ávila). They belonged to Perfecto de Dios, from Sandiás (Ourense), who was 19 years old and a member of the Guerrilla Army of Galicia. He was assassinated by the Civil Guard on May 16, 1950, after being arrested after a shooting. His mother was sentenced to prison.

Glasses, text by Héctor M. Silveiro Fernández. Glasses found by the ARMH in 2008 in the “de los bañezanos” grave, in Izagre (León). They belonged to María Alonso Ruiz, president of the Republican Union in La Bañeza (León), arrested in July 1936 and who suffered harassment and torture throughout the summer in the San Marcos de León prison, until she was finally murdered on October 10 along with ten men from La Bañeza.

Key, text by Antonio Maestre. Key found in 2016 by the ARMH during the exhumation of the remains of tailor José Rodríguez Silvosa and councilor Ramón Somoza Álvarez. The two residents of Monforte de Lemos (Lugo) were murdered on July 13, 1938 and buried in the Castroncelos Cemetery, in A Pobra do Brollón (Lugo).

Crucifix, text by Emilio Silva. Eloy Gallego Escribano, better known as Father Emiliano María Revilla, was a Spanish Franciscan engineer, aviator and friar. He was arrested by Falangists and assassinated in La Legua, in Gumiel de Izán (Burgos), on July 19, 1936. The Aranzadi Science Society recovered this crucifix in 2011 along with his body. “The objects that appear in the graves tell us many things about who the people who are in them were and in my case being able to write about the crucifix of a priest found in the grave of a group of murdered by the Falange has been on the occasion to reflect on how much there was politics and how much there was religion in the attitude of the Catholic hierarchy “, Silva explains.

Ring, Guadalupe Grande text. Alliance found by the ARMH in 2008 in a mass grave in Faramontanos de Tábara (Zamora). A few weeks before the coup, a group of professors traveled to León to form part of the Magisterium opposition court. They were arrested and, after being taken out of the San Marcos Prison, twelve of them were killed and thrown into a gutter.

The work began almost three years ago when José Antonio Robés began to contact families who had received the objects found in the graves, which had belonged to their loved ones, and began to photograph them. Among the images can be found a tinder lighter, buttons, pencils, buckles, toothbrushes, bullet casings, coins, espadrilles, combs, cufflinks, earrings and even a die that appeared in the exhumation of the remains of Timoteo Mendieta, the father of Ascension Mendieta.

The photographs are intended to take the reader out of that trend by which we “normalize” and in which, in the end, “we do not repair what is behind the suffering,” says Robés. “That behind each of these people there is a sad and heartbreaking story,” he says. “I did not want to limit myself to being a simple notary”, he says about the immersion in The voices of the earth. A project that is nothing but a “visual story” with a “poetic” approach to Historical Memory.

The personal elements, outside the excavations, provoke that “another look” towards “naked objects” that are “witnesses of barbarism”. And, hence, from founding genocide of the Franco regime, to the culture of “fear” that “has crossed an entire country for decades.”

“I have heard common stories in all the exhumations, people who tell you that they did not speak with anyone about these things … and these things were the illegal arrest and murder of their own father by Falangist gunmen”, in the words of José Antonio Robés.

“The bones that appear in the middle of the mud convey suffering, evil, tragedy … but even more information is provided by those small objects that accompany human remains. Toys that will never end up in the hands of the child, marriage rings violently broken, photographs of happy times that will not be repeated. These objects, thanks to José Antonio’s book, connect us with each of the victims “, Carlos Hernández abounds.

“We have somehow immunized ourselves to the effect caused by the exhumation of bones, and suddenly when objects appear next to those bones, the objects give them identity. They reconfigure them to look like human beings. When we imagine why they shot a man next to a pencil sharpener, why did he put away that pencil sharpener at the last moment. What history do those cufflinks, or the wedding ring, that inscription on a belt keep … Through them we imagine lives. Lives lived by those who they were shot without trial, without conviction, with no guilt other than thinking differently “, reflects the actor and director Juan Diego Botto, who talks about this project in the middle of the tour of his play A night without the moon, about the life and execution of Federico García Lorca.

The book The voices of the earth he rescues “the version of the losers” with black and white images and breaks with words the silence of “the accomplices” to, together, continue walking the path of Memory.