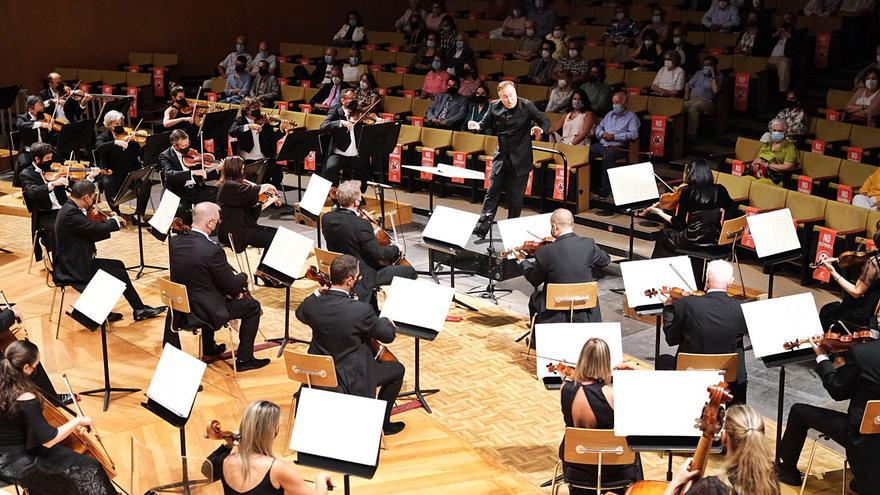 The Gran Canaria Philharmonic Orchestra launches from Monday, January 24 for the general public its campaign of spring of the 2021-2022 season, made up of a package of 11 concerts that will take place between the months of March and July 2022 at Alfredo Kraus Auditorium.

The value of emotion, the illusion of being able to share music and the connection that is established between everyone continue to be distinctive elements of the Gran Canaria Philharmonic Orchestra's spring program, in a desired context of growth and openness that will reinforce the capacity of the Alfredo Kraus Auditorium to offer the best musical experience in maximum security conditions.

The artistic proposal designed by the head of the symphonic group of the Cabildo de Gran Canaria, Karel Mark Chichon, will allow the Gran Canaria public to enjoy with a fantastic line-up of directors and soloists of international projection as the axis of a season full of attractions and novelties that reinforces if possible in this spring period the presence of the great works of the symphonic repertoire, within a wide range of styles and formats.

Other advantages include choosing a seat for the 11 concerts or making use of the free bus service (subject to seat availability), as well as a 10% discount on the purchase of tickets at other venues, a gift of a CD from the OFGC and preferential information by email or SMS.

Consecrated names will make their debut with the OFGC, such as the pianist Rudolf Buchbinder, a reference in the classical-romantic repertoire, who will offer the Brahms Piano Concerto No. 1 under the baton of Karel Mark Chichon, a work that Buchbinder has previously performed with prestigious orchestras from the Philharmonics of Vienna or Berlin. The program, which includes Dvorák's Dramatic Overture for the first time, will be added to the Women's Day celebrations, with the premiere of the winning work of the Composition Contest for Canary Women Creators organized by the OFGC, an important stimulus for musical creation of the Islands.

Legendary batons such as Leonard Slatkin, a maestro who has left a deep mark as a regular in Detroit and Lyon and at the head of the most important orchestras in London, Pittsburgh, Los Angeles, Washington, Minneapolis or Cleveland, will also perform during the season, and who will offer the formidable Symphony in D minor by César Franck in commemoration of the bicentennial of the great Belgian composer. In this program, which will only be heard in Gran Canaria, Gidon Kremer will also make his debut, a true myth among violinists, an artist of extraordinary communicativeness who has worked alongside conductors such as Karajan or Bernstein.

Another of the consecrated European masters will return to the podium of the OFGC, Jean-Claude Casadesus, referential name of the French school of orchestral conducting, who left such a magnificent impression in his debut last season and who presents a program with works by Franck, Debussy , Dukas and Ravel in which we will again admire the talent of the Venezuelan pianist Gabriela Montero, a soloist much appreciated by the Gran Canaria public.

Karel Mark Chichon also shows his commitment to showcase the enormous talent of OFGC soloists. Thus, we will be able to listen to the main viola soloist, Adriana Ilieva, measuring her strength with the cello soloist of the legendary Berlin Philharmonic Bruno Delepaire in Don Quixote by Richard Strauss, in a program that Chichon completes with the Metamorphoses of the aforementioned Bavarian author .

Let us add to this relationship the appeal of Bruckner's Symphony No. 4 "Romantic" through the youthful talent of Dan Ettinger, recently appointed music director of the Teatro San Carlo in Naples and who holds the reins of the Stuttgart Philharmonic and the New Israeli Opera. from Tel Aviv, in addition to having been an assistant to Daniel Barenboim at the Staatsoper in Berlin.

The presence of British conductor Adrian Leaper, head of the OFGC between 1994 and 2002, symbolizes the link with the orchestra's past and will give us the opportunity to listen to him in a repertoire of which he is a renowned performer such as Sibelius, with En saga and Symphony no. 5. It will be a doubly attractive program with Emmanuel Pahud as a guest soloist, considered by many to be the best flutist in the world and principal soloist of the Berlin Philharmonic.

Another of the great milestones of the season will be marked by Venezuelan Pacho Flores, an artist among the elite trumpet players, who will have Leo Rondón as accompanist on the Venezuelan cuatro in a program with works by Paquito D'Rivera and Pacho Flores himself. Maestro Manuel Hernández Silva, head of the Navarra Symphony, will be in charge of directing this attractive evening.

We will also be visited again by director Keri-Lynn Wilson, in a program that will also feature the debut of accordionist Ksenija Sidorova, soloist here of Astor Piazzolla's “Aconcagua” Bandoneon Concerto.

Rafael Sánchez-Araña, one of the most promising young conductors from the Canary Islands, will once again lead the OFGC with an ambitious symphonic-choral program that includes for the first time this season the great Requiem in C minor by Cherubini together with the Coro de la OFGC and the Czech Suite of Dvorák.

The Hungarian Henrik Nánási, still recently successful in his presentation with the OFGC, will return to the podium with a program made up of Stravinsky's Petrouchka and the very demanding Sibelius Violin Concerto with Augustin Hadelich as soloist, a figure of growing projection who has performed with the most prestigious conductors and orchestras in the world and which also returns after its acclaimed debut last season.

Closing the season, Chichon will lead a lyrical program that unites Richard Strauss and Puccini, operatic icons of the 20th century. The concert will open with the superb dramatic pulse of the Straussian Don Juan, to continue with an orchestral selection plus the final trio of his opera The Knight of the Rose, the work that made him a legend. The concert is completed by a selection of Madama Butterfly, the most intense and heartbreaking, but no less beautiful of Puccini's operas.