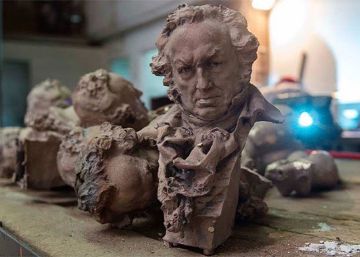 Towards one o’clock in the morning, the most even race of the Goya awards of the last years will end, that of the award for best film. According to the sportsbook Sportium, Pain and glory, from Pedro Almodovar, It is the big favorite with 1.33 euros per euro wagered. Second would be While the war lasts, Alejandro Amenábar, has a share of 4.30, and The infinite trench, from Aitor Arregi, Jon Garaño Y Jose Mari Goenaga It reaches 4.50 euros per euro wagered. If the reference is the previous awards, the Forqué, which the producers deliver, are usually right in the best film award, and here they won The infinite trench, if it wasn’t … if it wasn’t because no Pedro Almodóvar movie has won this trophy. That is to say: the Forqué do not help to predict when a film by Almodóvar is favorite. In addition, these two films are not the ones with the most candidates, but that honor holds While the war lasts, Alejandro Amenábar, with 17 nominations, one more than the drama of Almodóvar, and two more than the history of the Malaga mole of the Civil War. There had never been an elbow with each other between three films in the Goya. Almost 1,800 academics have the right to vote. How many vote? And of those, how many vote all categories? It is the big question.

Presenters In this edition, the Academy has chosen to announce the names of many presenters: Penelope Cruz, Bob Pop, Ángeles González-Sinde, Marisa Paredes, José Coronado, the Javis, Santiago Segura … Also that the quintet of candidate films will have about Introducers of honor: the most successful Spanish swimmer, Ona Carbonell, will present What burns; former soccer player Carles Puyol will do the same with Outdoor; British pianist James Rhodes will introduce The infinite trench; the journalist María Casado will present Pain and glory, and also the reporter Rosa María Calaf will announce While the war lasts. Pablo Alborán, Jamie Cullum, Rayden, Ana Mena, and Antonio Banderas will perform with the musical actors To Chorus Line. The couple Amaia and Celia Flores will perform songs from Celia’s mother, Pepa Flores, Marisol, Goya de Honor is not known if he will collect the award. Among the authorities that have confirmed their presence is Pedro Sánchez, President of the Government. Of masters of ceremonies, Andreu Buenafuente and Sílvia Abril, who repeat after the success of Seville. “It will be a very visual gala,” they said this week.

Public of the street. Last year in Seville more than 200 people protested the remoteness of celebrities. In Malaga, the Academy has remedied this, and in a city that lives the famous cinephile as few – as its Spanish film festival shows – it opens a red carpet only for street audiences next to two giant screens at the gates of the Martin Carpena pavilion, where the gala is held. On the contrary, the forecast of cold and possible rain does not help the crowd bath. Inside will see the delivery 3,200 people, the largest capacity in the history of the awards. Among them, the eight who bought tickets for 1,600 euros through the website of one of the sponsors, American Express, who only asked to be a cardholder. According to the Academy, it is a special action for clients vips, but … “It is not honest to sell tickets because this is not a show but an awards ceremony,” the president said Monday Mariano Barroso. “It is the responsibility of the sponsor.”

Goyas clean, retouched and travelers. The awards have been certified by AENOR as an event with zero emissions, and accredits that gas emissions have been offset. The touch up comes in the statuette. After years by the sculptor José Luis Fernández, the Academy has made a slight aesthetic touch-up in its head, which brings the design prize of the original creator of the trophy, the sculptor Miguel Ortiz Berrocal. If last year they were held in Seville, and today in Malaga, in 2021 will they go to Valencia? The excuse: the centenary of the birth of Luis García Berlanga. For Valencian desire, that is not left.