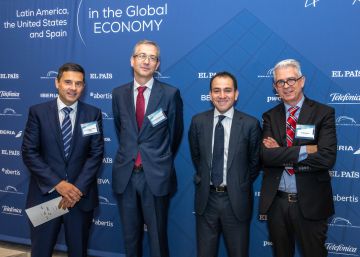 Recession or not recession. It is the dilemma with which economists, businessmen and leaders from all over the world have been encountering for months when analyzing the signals that arrive from the economy. The growth slowdown global the tariff battle and the Brexit These are the three main risks at this time for global expansion. In the case of the Spanish economy, political uncertainty also plays.

The governor of Bank of Spain, Pablo Hernández de Cos, affirms in this sense that "a stable government is needed" to, among other things, "undertake structural reforms and end the fiscal consolidation process". The central banker made this comment in the framework of an organized economic forum in New York organized by the Spanish-US Chamber of Commerce and EL PAÍS, with the sponsorship of Abertis, BBVA, Telefónica, PwC and Baker McKenzie with the collaboration of Iberia .

Hernandez de Cos presented the latest update of the spanish economy. He explained that the expected deterioration is now partly due to a technical component, for the historical revision of the INE series and that they have new data on social security affiliates. Despite this, he anticipates that the economic activity will continue to be significantly higher than that of the rest of the euro zone.

The mainstay is domestic demand, although he said he "loses his bellows." The governor of the Bank of Spain said at the same time that the economy of the euro zone is currently the most affected by the slowdown because it is the most open. External disturbances are affecting you through exports, investment and durable goods. Its main trading partners, he says, also carry it worse.

The sector most affected in the area by the slowdown at this time is the manufacturing sector, due to commercial uncertainty. The service, he adds, is stabilized at high levels. In this sense, Hernández de Cos considers positive that the recession, which is already observed in the indicators that measure manufacturing activity on a global scale, has not moved to services.
All these projections, he clarified, are made under the premise that the commercial war is resolved and that that Brexit concludes in an agreement. "If it is not fulfilled," he warns, "the growth will be even lower." In this way he justified the laxity of the European Central Bank, which two weeks ago reduced interest rates again and resumed net purchases of assets without a deadline.

He also considered that monetary policy is depleting the room for maneuver and that is why the prosecutor should "take over again." The economic deterioration, he concludes by looking at the behavior of the markets, will be greater than expected and more persistent in the long term. "The organizations have become progressively more pessimistic," he told the forum. Low inflation, he points out, can be explained at the same time by "less volatile elements" than in the past, such as oil.
"The feeling is very different from a year ago," says analyst Lisa Schineller of Standard & Poor's. Remember that then they already anticipated a slowdown but the tariff battle changed the dynamics of business, due to uncertainty. "Our scenario is not recessionary," he says, "but the risks have increased" as well as "variables" that comprise it.

José Manuel González Páramo, BBVA chief economist, does not believe that he is still in a crisis situation. The central banks, they add, try precisely to cushion the negative effects. And although in the case of Spain, he says that he is much better prepared to deal with a new adverse scenario, he is concerned about the deterioration observed in growth since the summer.
The political blockade creates a problem in this regard, because there is a risk of "closing the window of opportunity" to take advantage of the expansion to undertake the structural reforms that are necessary. "There are many issues still to be solved in order to sustain growth," says González Páramo, both in the labor market, as well as in employment, education or competition.