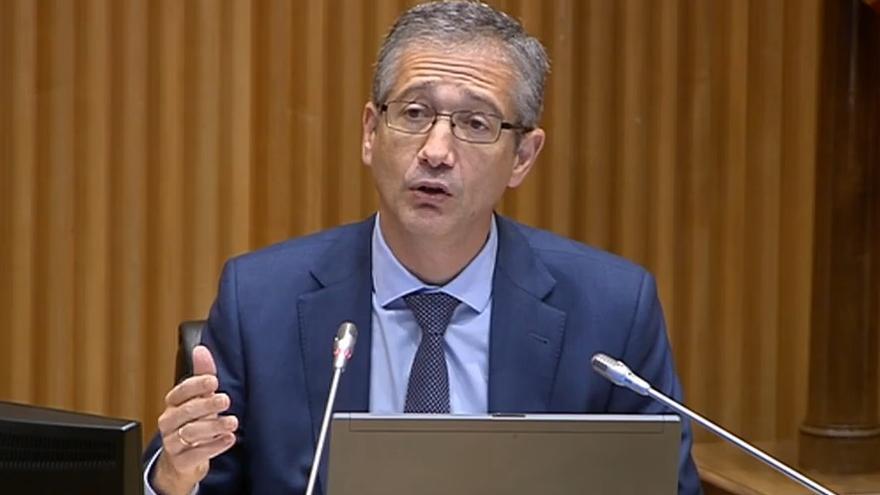 In the middle of the political storm over the reform of the General Council of the Judiciary And with the opposition in full offensive against the Pedro Sánchez coalition executive, whom it accuses of undermining the institutions, the governor of the Bank of Spain, Pablo Hernández de Cos, appeared in Congress this Tuesday to point out that it is “convenient to grant a greater relevance to Parliament in the appointment of the governor, the deputy governor and the non-native members of the Governing Council “of the monetary authority since it would result in” a greater public perception of the independence and legitimacy of those responsible, and would have a positive impact on the prestige of the institution, the trust it transmits to citizens and the proper performance of its functions “.

Hernández de Cos’s proposal draws attention especially when there is a strong controversy over the paralysis of the renewal of the General Council of the Judiciary, which has been blocked for two years due to the Popular Party’s refusal to negotiate substitutes. Only a few weeks ago, the parties of the coalition government managed to get Congress to take the first step to limit the powers that the governing body of the judges must have when it is in office as a result of the initiative of the PSOE and United We Can. This reform, backed by the reinforced majority of the investiture, aims to prevent an interim Council from making discretionary appointments.

Although he recalled that “the Government cannot give instructions to the Bank of Spain, nor can it collect or accept them”, Hernández de Cos’s proposal draws even more attention when he admits “that although it is not the predominant model in the major European countries, in some central banks, such as Finland, Slovakia, Latvia, and Lithuania, their parliaments play a notable role in the governor’s appointment procedure. Outside of Europe, in the United States the appointment of the chairman of the Federal Reserve requires confirmation in the Senate. ” That is, there are no references in the countries that are reference in the EU of the model requested by the governor.

Suspicions of impartiality in the proceedings reach the Ministry of Economic Affairs. The governor asks that the sanctions issued by the Bank of Spain in the supervisory sphere “could not be appealed before the Ministry of Economic Affairs and Digital Transformation, without prejudice, of course, to the possibility of appeal against them before the courts of Justice”.

But in addition, Hernández de Cos has been involved in several controversies with some ministers of the Executive of Pedro Sánchez as the Vice President of Economic Affairs, Nadia Calviño, or the Minister of Inclusion, Social Security and Migrations, José Luis Escrivá, for the opposite positions of the Governor of the Bank of Spain in the Budget Committee of the Congress of Deputies on 0.9% increases in pensions and salaries of public employees.

This controversy is not trivial, since Hernández de Cos requests a greater participation of his institution in Parliament. Although the governor emphasizes that the increase in appearances in the Upper House – there is already parliamentary control over the budget of the entity and goes to the Economic Commission of Congress to present the Annual Report – would obey the accountability of the institution to the deputies, also adds that there is a need for “a greater number of regular appearances by the governor before Parliament” in which “the governor will periodically present the vision of the Bank of Spain on the economic situation, monetary policy and the financial system, and also to give an account of the actions and plans of the Bank of Spain “.

He also asks for a reflection on the duration of the mandates, which in his opinion should be extended even more than the current six years that the governor of the Bank of Spain enjoys. Although currently it is longer than the electoral cycle, Hernández de Cos looks at the members of the Executive Commission of the European Central Bank, whose duration is eight years. This extension would be, in his opinion, “a crucial element to reinforce the independence of the people”. To avoid misinterpretations, Hernández de Cos has stressed that he was referring to the future governors of the institution. He also stressed that the current non-renewability of the system is positive.

Proposal of the financial supervision model

Regarding the supervision model, the governor recalled that “after the last international financial crisis, some countries have modified their supervisory models towards more integrated models and with a greater role for central banks.” In this sense, he highlighted the need to develop “a model articulated around two separate agencies: one around the central bank, in charge of prudential supervision and a second agency for the tasks of monitoring the conduct of all types of intermediaries and of protection of investors and clients of the different financial products and services “.

“The separation of the responsibilities of preservation, on the one hand, of the financial soundness of all financial entities regardless of their nature (banking, insurance, securities, etc.) – including the ability to decide autonomously the use of the instruments macroprudential – and, on the other hand, the vigilance of the proper conduct in its relationships with its clients and its assignment to different authorities (the Bank of Spain and the CNMV, respectively), represents, in my opinion, an optimal institutional scheme to manage possible conflicts between both responsibilities and to improve the efficiency and effectiveness of the supervisory activity “, he pointed out.