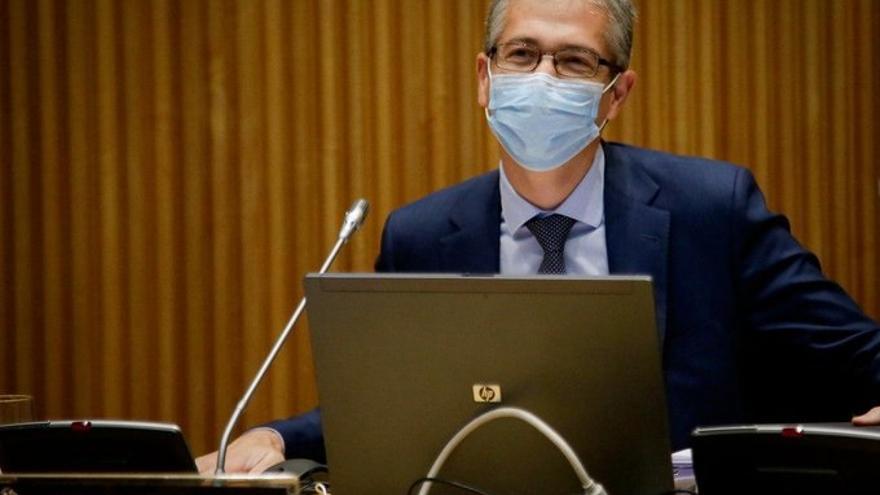 The analysis and explanation of the 2021 General State Budget project has served to bring controversial economic figures back to the debate. The governor of the Bank of Spain, Pablo Hernández de Cos, has asked in congress that part of the European funds be dedicated to defray the initial or transition costs of the so-called Austrian backpack, a system of individual capitalization accounts in which the worker accumulates funds in a kind of piggy bank in the face of a possible dismissal or for his future retirement, during his appearance this Wednesday in the Congressional Budget Committee. On the other hand, he has questioned the general increase in public salaries and pensions as well as the increase in taxes due to the “fragility of the economy”.

Hernández de Cos has assured that the Austrian backpack is a mechanism to “combat the duality of the Spanish labor market” but whose implementation would have “transition costs, insofar as the costs and payments in the new scheme are not distributed equally between companies and workers with respect to the current system “. According to the governor, said “transition costs, the determination of which requires a very careful prior analysis, could be addressed, at least partially, by resorting to European funds.”

The implementation of this system has always been surrounded by controversy and has been one of the flags of the political formations of the right, especially Citizens, and by the more liberal part of the coalition government, with the Vice President of Economic Affairs, Nadia Calviño, as its main defender within the Executive chaired by Pedro Sánchez.

In fact, the issue of the Austrian backpack has been one of the points of friction between Calviño and the Minister of Labor, Yolanda Díaz, who has been publicly against its approval when the vice president’s department included it in its ‘Agenda for Change’ during the last legislature.

Junts per Catalunya recently succeeded in introducing an amendment to the economic opinion of the Congressional Reconstruction Commission for the creation of a capitalization fund similar to the Austrian backpack, which was also supported by Ciudadanos. The proposal was about to be approved, but the United We Can deputies linked their support for the opinion to the veto of said amendment. Finally, the amendment was deleted.

Regarding Budgets, Hernández de Cos has pointed out that in the situation of “fragility of the economy” he did not see adequate measures such as raising the salaries of public servants as well as increasing pensions. “The proposals to increase public salaries and pensions contemplated in the PGE Project could lead to an increase in the real compensation of these groups, in a situation in which, at the same time, significant job destruction is taking place. in the economy as a whole and a very marked deterioration, without recent historical precedents, in the public accounts, “he pointed out.

In this way, the governor of the monetary body has advocated adopting salary increases “more focused within this group, for example, in health personnel” while regarding retirements, he has discarded the possibility that they continue to increase according to inflation. that “would generate an increase in pension spending over GDP of around 3 additional percentage points in the 2050 horizon”, except if “system resources are increased or alternative reductions in the benefit rate are allowed (what the pensioners) or additional increases in the effective retirement age “.

In the area of ​​taxes, Hernández de Cos stressed that “fiscal policy should provide a very decisive response in the short term to limit the adverse effects of the crisis on companies, the self-employed and households, and avoid a deterioration in growth potential of the economy At the same time, in order to rebuild public finances after the extraordinary shock that this crisis is causing, an ambitious fiscal consolidation strategy for the medium term should be defined promptly, rigorously and credibly. , among other issues, address a comprehensive reform of the Spanish tax system “.

However, this comprehensive reform, according to the Governor of the Bank of Spain, should have been postponed: “The ongoing economic recovery still shows obvious signs of fragility and is subject to considerable downside risks that do not advise a general increase in the fiscal pressure at the moment. Therefore, it would possibly have been preferable to delay the introduction of some of them until our economic recovery was more robust. ”

In addition, the governor has warned that due to outbreaks and new restriction measures to stop the pandemic, the fourth quarter is showing signs of a slowdown in growth, compared to the 16.7% increase in GDP in the third quarter, due to which predicts that the fall of the Spanish economy in 2020 will be 12.6%.

Finally, Hernández de Cos has reiterated his dual discourse on “the need to actively use budgetary policy to combat the economic consequences of the pandemic” and at the same time has highlighted the deterioration of public finances, for which “it is imperative” to design a detailed medium-term budget consolidation plan “to be implemented as soon as the pandemic is overcome and which, by reducing the financial vulnerability of the economy, helps put activity and employment on a path of sustained growth and alleviates the costs of the crisis on the population groups most affected by it “.