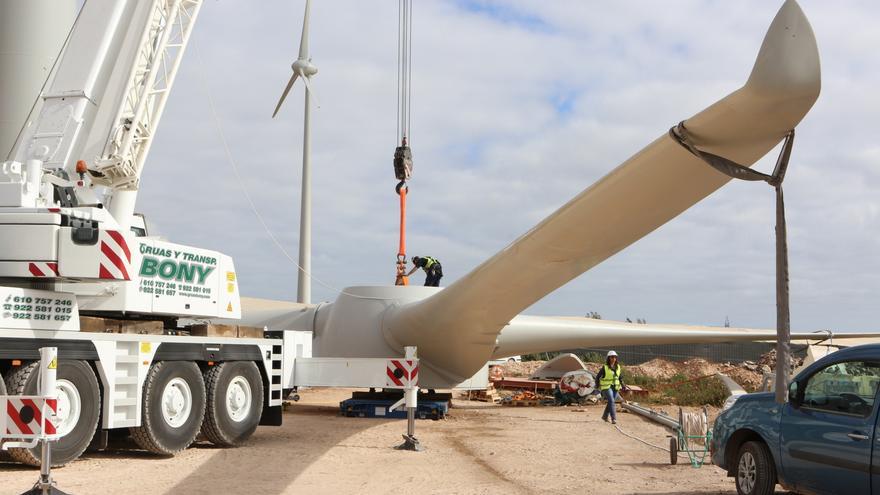 The Government works against the clock with the public company Tragsa to process the barrage of renewable projects that accumulate on the table of the Ministry for Ecological Transition. The term expires in September. after the nine-month extension to the expiration of the permits of access to the network that the Executive approved in a Royal Decree-Law in December.

Time is running out, with the energy business immersed in a boiling moment, with a price crisis for which there is no end in sight, due to the contagion of the increases in gas to the electricity market, and the sector shaken by the announcement, this thursday of the spin-off of Naturgy into two new companies listed.

A few hours before the announcement of the energy company, Vice President Ribera recognized in an act at IESE the problem of lack of resources to deal with the processing of the parks. The administrations "are not equipped" in the face of the avalanche of renewable projects presented because "the equipment is not adequately sized" and, in addition, caution prevails when authorizing the projects to cover themselves from possible legal problems in the future. "This problem has to be solved well and soon," she indicated.

To streamline the work related to the processing of projects, the department of Ribera has contracted the services of Tragsatec, so that they provide services in various functional areas of Industry and Energy of the Government Delegations and Sub-delegations. Specifically, those of Toledo-Ciudad Real, Valladolid-Palencia, Aragón, Madrid, A Coruña-Lugo, Albacete-Cuenca, Guadalajara, Alicante, Valencia, Cádiz-Seville, Navarra, León, Granada-Málaga and Extremadura.

Work on these last two has not yet started. Tragsa began to carry out this reinforcement work in November 2021 and the work will continue until September. A multidisciplinary team made up of personnel with a technical, legal and administrative profile, with different levels of experience, "works on site in the management of the procedures for the prior administrative authorization and the administrative authorization for the construction of the procedure that is processed jointly with environmental impact assessment", explains Ecological Transition.

Its tasks include reviewing the applications submitted by the promoters and providing support for the preparation of advisory reports to the different administrations, organizations or companies of public service or services of general interest in the part that the renewable installation may affect their assets and rights under their charge, as well as in relation to their environmental impact, so that they present their conformity or the objections they consider. Other tasks are those related to the technical analysis of the promoter's response to the allegations presented by the administrations.

In any case, the ministry specifies, these works have the nature of technical assistance and support for the attention of the interested party, "being the responsibility of the civil servant the activities of supervision, coordination, follow-up and any other related to the processing and management of the file procedures.

Last December, the wind sector already claimed to subcontract administrative procedures for renewable projects in the face of the phenomenal backlog of requests, while requesting an extension to the milestone system that expired that same month to avoid a massive return of the guarantees deposited. The extension was granted days later, in an exercise of pragmatism on the part of the Administration: the execution of these guarantees would have led to a barrage of claims of patrimonial responsibility from the promoters to the Administration for not being able to meet their own deadlines on time.

Ecological Transition agreed to give this extra period with the unanimous support of the autonomous communities, which process smaller projects. And in parallel, it opened a temporary window to allow projects that had been granted a point of access to the network, but were conflictive from the environmental or social point of view, to resign, recovering in exchange the guarantees that they had deposited as a guarantee, of 40,000 euros for each MW planned.

However, sources familiar with the process indicate that considerably fewer projects than expected have attended that time window. Ecological Transition has not yet released these data. One of the companies with the most controversial projects is Forestalia, which has given up processing a score with about 800 megawatts (MW) of power, but continues with 90% of its projects. Other groups such as Capital Energy have also taken advantage of this window. Others like Endesa have not given up on any. The power company considers that all are viable.

Until January, Ecological Transition had received requests to install 66,000 renewable MW, of which less than 30%, some 19,700 MW, were in the environmental processing phase, and which were divided into 697 projects: 467 photovoltaic, of which not a fourth part (113) had reached the environmental impact assessment phase; 211 wind farms (34 under evaluation); two hydroelectric (under evaluation) and 17 hybridization (three under evaluation). And to them are added the projects of less than 50 MW, which are processed by the autonomous communities.

Currently, and without counting the projects that have resigned with that temporary window, there are requests for access and connection to the grid for some 150 GW of renewables, but the National Integrated Energy and Climate Plan (PNIEC) only plans to add up to 35 GW in 2025 and 60 GW in 2030.